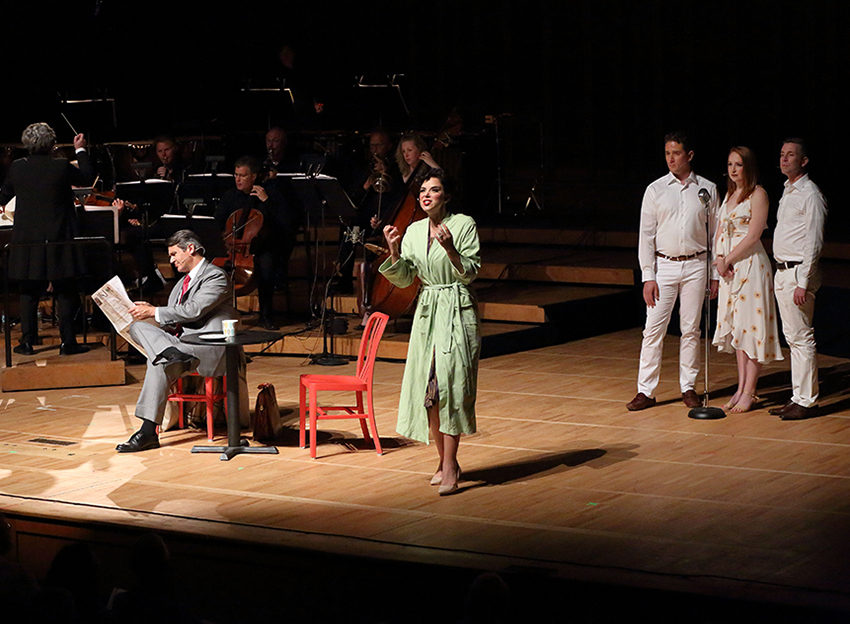 The cast of 'Trouble in Tahiti,' performed July 12 at Tanglewood. Photo: Hilary Scott

Lenox — There was trouble in Ozawa Hall when Leonard Bernstein’s 1952 one-act opera “Trouble in Tahiti” took the stage at Tanglewood on Thursday, July 12. The trouble was with Bernstein’s words: Most of them were indecipherable from my location in the first balcony, in spite of the singers’ good diction (you could read their lips) and in spite of their voices being liberally amplified via wireless headset microphones.

In the decades since its construction in 1994, Ozawa Hall’s acoustics have been tweaked to perfection by some of the top acoustical engineers in the world, so it seems unlikely that Thursday’s problem lay in the hall’s design. Besides, similar sound reinforcement configurations have worked well in Ozawa Hall countless times in the past. Whatever the problem was, we can only hope someone solves it before Bernstein’s “Candide” is performed there on August 22 and 23.

Fortunately, the opera was skillfully staged and performed, which wouldn’t have mattered if his writing weren’t so good. (Bernstein wrote the libretto as well as the score.)

Alexandra Silber’s gripping portrayal of Dinah was utterly believable from the first note to the last—heart-breaking, in fact. If Silber had been singing in Chinese, the emotional gist of the story still would have come through.

Charles Prince conducted a 14-piece orchestral ensemble made up of prominent musicians from the Boston area, several of whom have performed with the Boston Symphony Orchestra at one time or another. Bernstein’s score is quirky and difficult, with many hazardous twists and turns. These players made it look easy.

Leonard Bernstein’s daughter Jamie was on hand to provide autobiographical tidbits and sharp-witted commentary on the evening’s music, which began with several selections from the “Bernstein Songbook.” The improbable highlight from that set was a hilarious send-up of the kind of music the academic community was constantly pressuring Lenny to write. “I Hate Music!” is playful and wickedly funny.

One of the lesser-known works in the Bernstein canon, “Trouble in Tahiti” may not be in the same league as the enormously successful “On the Town,” which Keith Lockhart and the Boston Pops Orchestra performed brilliantly at Tanglewood on July 7, but it showcases the quirky, jazz-inflected melodic and harmonic writing Lenny is famous for. This piece of music needs to be heard, because it stands on its own whether the words are clear or not.