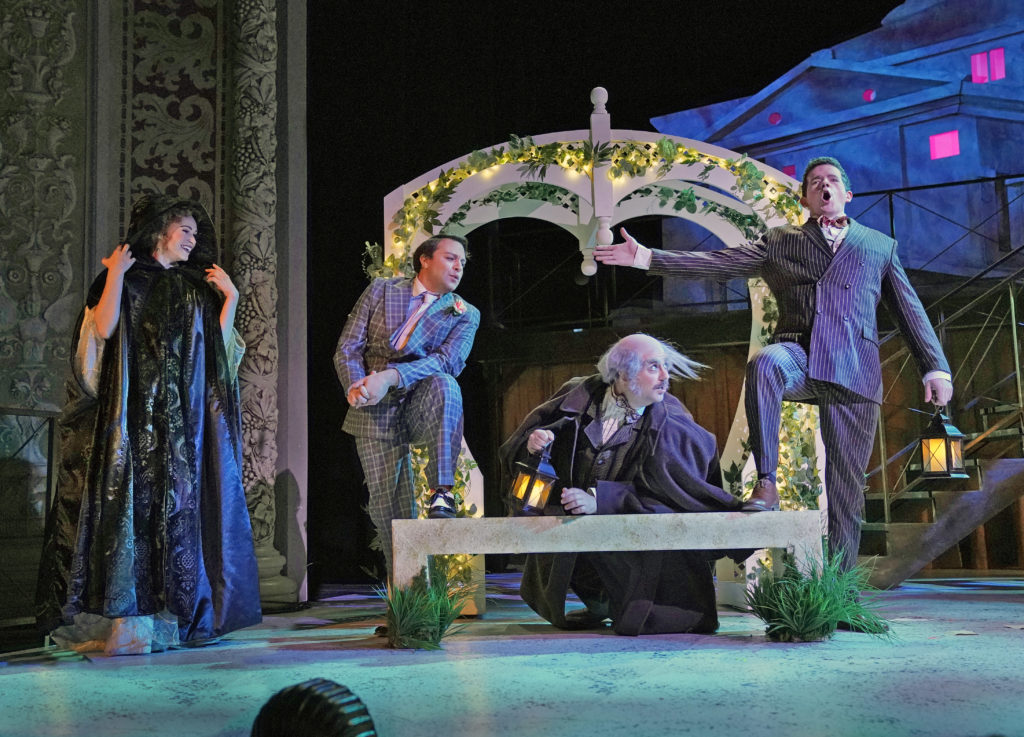 Berkshire Opera Festival’s excellent “Don Pasquale” is everything a comic opera ought to be: funny and broadly played by agile actors; lively, with a libretto sung by great voices; and lyrical, with music played by a fine orchestra. It also — at the end of a so-so Berkshire season when it comes to musicals — emerges as one of the highlights of the summer, both musically and theatrically: Dare we say musical theater? BOF’s production IS one of the best musicals of the Berkshire theater season. There: I said it.

If anyone is put off by opera, “Don Pasquale” — written by Italian composer Gaetano Donizetti and first performed in 1843 — is Intro to Opera 101. It’s not grand, ponderous or epic. Even a casual cultural observer will see it as the musical progenitor of Gilbert and Sullivan’s work and, later, some of Sondheim’s. And the plot is of the silly kind that set the stage for stories of the most beloved of Broadway musical comedy. 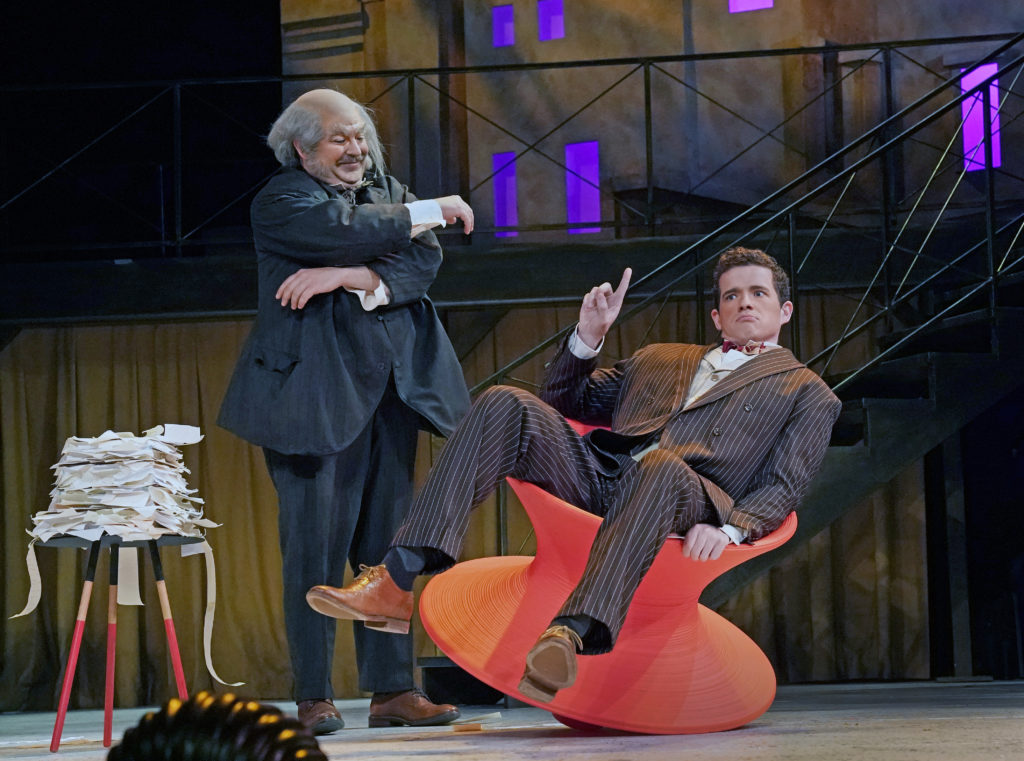 Don Pasquale (bass-baritone Craig Colclough) is an elderly, wealthy-but-stingy curmudgeon of a bachelor who casts out of his household his ne’er-do-well nephew Ernesto (tenor Matthew Grills) and solicits his friend Doctor Malatesta (baritone Emmett O’Hanlon) to find him a wife. The doctor arranges a marriage between his sister, the young widow Norina (soprano Deanna Breiwick), who disguises herself as an older Sofronia. The charade becomes a secret conspiracy among the doctor, Norina and Ernesto, who, as it turns out, was courting Norina. Pasquale’s marriage turns miserable; Norina spurns his advances, humiliates him and squanders his fortune. Don Pasquale almost goes crazy. He discovers the real identity of Norina and her relationship to Ernesto. Reconciliation ensues, complete with moral.

Maestro (and BOF co-founder) Brian Garman conducts the onstage orchestra of about 30 with sprightly élan. Director (and BOF co-founder) Jonathan Loy matches Garman’s pace and peppers the action with props of visual wit. Don Pasquale’s bachelor chair is a threadbare upholstered Barcalounger: when Norina redoes the early 19th-century-Rome version of his man cave, the recliner gets replaced with a bright red Herman Miller Spun Chair. It’s used to brilliant comic effect; Don Pasquale, costumed as overweight, getting in it and then balancing himself while singing is hilarious. (This Don Pasquale sports a combover more ridiculous than You-Know-Who’s). The best costume, hands down, goes to Norina, who, sporting black dominatrix undergarments festooned with silver spikes, “tortures” poor Don Pasquale with a whip. Soprano Breiwick is perhaps the shapeliest soprano onstage today, especially in black fishnet stockings and spiked heels: This ain’t the stereotype, heavy-set Brunhilda of Wagner fame. 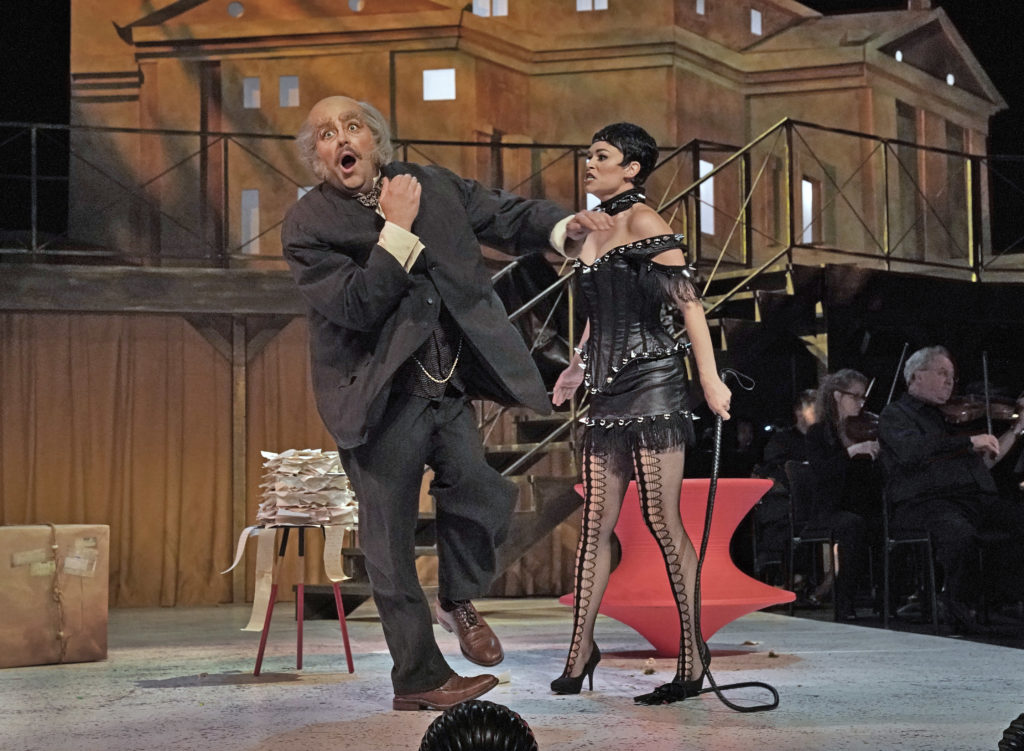 The singing is a wonderful confection of short arias, duets and quartets. My favorites are: the duet between Don Pasquale and the Doctor — “Aspetta, aspetta, cara sposina” (“Wait, wait, dear little wife”), in which bass-baritone Colclough and baritone O’Hanlon have fun hamming it up; the love song “Tornami a dir che m’ami” (“Tell me once more that you love me”) between Ernesto and Norina; and the finale quartet “La moral di tutto questo” (“the moral of all this”). The ensemble number with a fine chorus of nine, “Che interminable andirivieni!” (“Such endless coming and going!”) is especially amusing (and vaguely reminiscent of Sondheim’s “A Weekend in the Country” from “A Little Night Music,” but, then again, I’m a Sondheim junkie).

The projected English translations by Cori Ellison are comprehensible and easy to follow. The Mahaiwe’s acoustics are perfect. (I had a mezzanine seat.) “Don Pasquale” goes down like summer lemonade, all in three acts with one leisurely intermission, in two hours and 20 minutes: smartly tart, just sweet enough, refreshing, and totally satisfying. Bravo!

Don Pasquale plays at the Mahaiwe Performing Arts Center in Great Barrington, Massachusetts, through Friday, Aug. 30. For information and tickets, see the Berkshire Edge calendar, call the box office at (413) 528-0100 or go to mahaiwe.org.