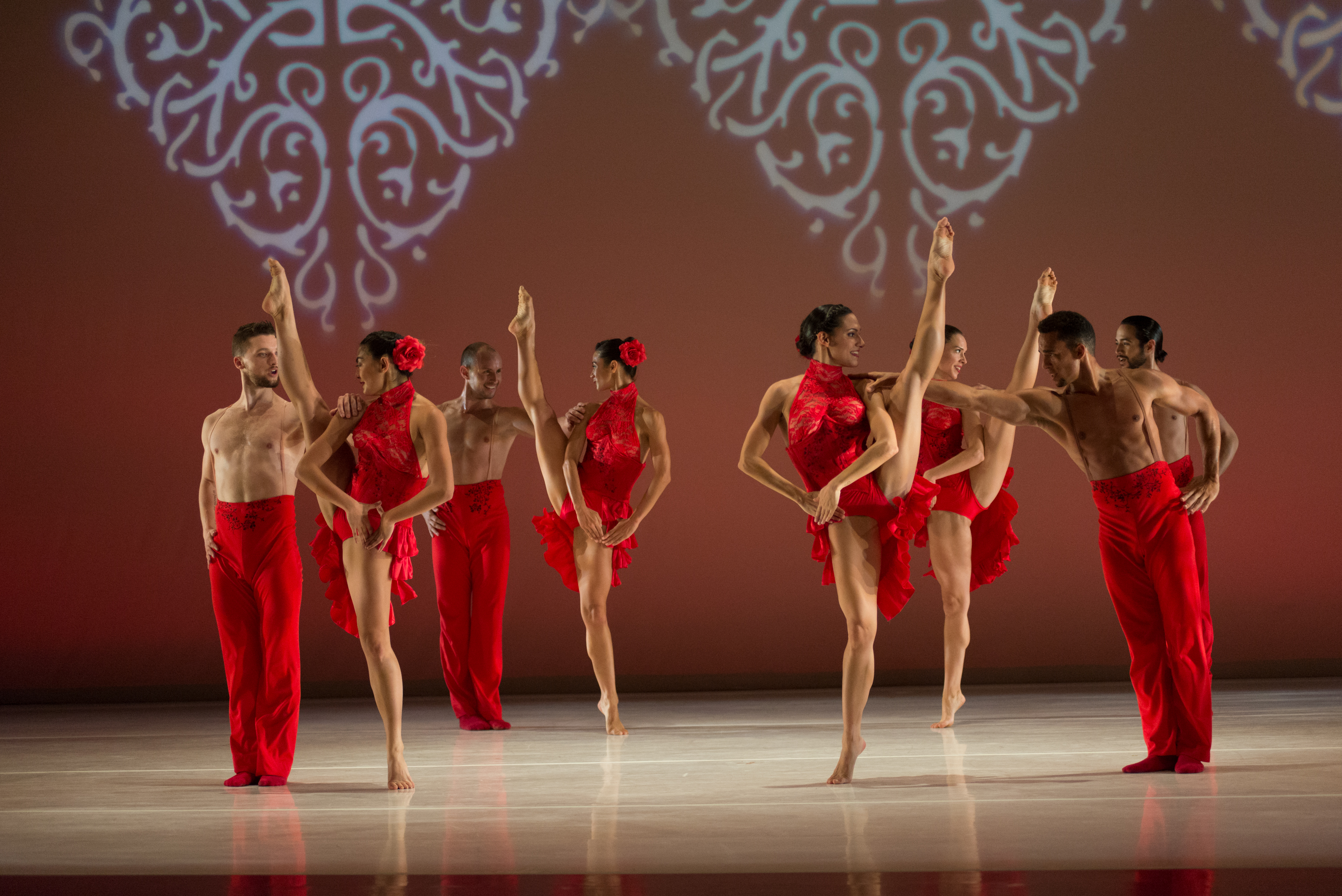 In its stunning opening performance at Jacob’s Pillow this week, Ballet Hispánico brings together both the contradictions and the promise inherent in its name. In her pre-performance Pillow talk, dance scholar Moira Keefe noted that when Tina Ramirez founded Ballet Hispánico in 1970, the term Hispanic had just entered the national vocabulary. A little further searching in Wikipedia revealed that “Hispanic” was created during the Nixon administration as a census category. Yet one doesn’t have to resort to Wikipedia to realize that the term is but a microcosm of a broad complexity of identity, which can be political, racial, geographic, cultural, sexual, historical, and/or any combination of the above.

Ballet Hispánico dances to illuminate and to embody the Hispanic world. That it enlightens, excites, and awes the audience is a testament to the creativity and ingenuity of its director since 2008, Eduardo Vilaro. His virtuoso dancers work with a number of inspired choreographers, costume and lighting designers.

El Beso, a meditation on the kiss, deliciously suffused with the 4/1 beat of Zarzuela, and a spice rack of tastes, impulses and formalities, began the program. And what an auspicious curtain raiser it was!

The piece was framed within a series of musical vignettes. First, a solo male dancer, undulating and articulating from a crouch into emergence into a social space, was joined through the vignettes by increasing numbers of dancers. They wore stunningly simple black costumes (created by Venezuelan fashion designer Angel Sanchez), with flowing lines and cut-outs showing bits of body, perhaps evoking how a kiss shows bits of a relationship as it punctuates the dancers’ movements. Are the kisses the end point of a relationship, or an entry into something more? Are they social or emotional, an antidote to loneliness or an affirmation of isolation?

There are so many ways to kiss. Throughout the piece, socks allow dancers to slide into and out of surprise kisses; kisses traverse an arm, suggesting more to come; social kisses on each cheek telegraph disconnection as much as connection; while a sensuous pair exits the stage in a sustained and passionate kiss, leaving the audience with no doubt what happens next, all within light, playful, fast-paced scintillations.

After the first intermission, the company offered Línea Recta, a powerful tribute to Flamenco. Set to the strong and soulful guitar and cante of Eric Vaarzon Morel, the dancers projected barely-concealed passions in costumes of the purest, brightest red, the men in high-waisted, fitted pants, the lead woman in a long ruffled train flowing off the back of her waist, forming a bridge and a connection to male dancers. Only the spirit of the long, traditional Flamenco skirt remained. Its suggested absence permitted the full movements of a balletic reinterpretation, while also drawing from the folk, North African, and European streams of traditional Spanish dance.

Please enjoy this beautiful preview of Linea Recta in this Jacob’s Pillow video:

After a second intermission, the performance ended with a Danzón, choreographed by director Eduardo Vilardo, an inspired fusion of Cuban contra dancing, contemporary and classical dance forms, and be bop inspired jazz. Set to arrangements of “You’ve Changed” by Paquito D’Rivera and “Night in Tunisia” by Dizzy Gillespie and Frank Paparelli, this was a joyous celebration of the richness of culture, community and identity. The costumes were understated yet exuberant; the men in rich maroon brown t-shirts and trousers, the women in waist pinching full, swinging short skirts, giving them a youthful, flirty look.

D’Rivera’s beat pulsated and propelled a voluptuous flow of bodies, as the ensemble slunk, smoldered, and gyrated into and away from each other. A solo male dancer articulated his body through a series of clarinet glissandos, murmurings and shrieks, as though he were made of cartilage rather than bone. One heard Africa, Haiti, and Cuba through ones ears, and saw bodies stretching the limits of what bodies can do, melting into each other, creating gravity-defying formations and a whole corpus of astounding athleticism in the corps de ballet.

Both the music and dance of Ballet Hispánico straddle and explore culture, with thrilling consequences. We came away from this performance deeply satisfied by the beauty and virtuosity of the dance and provoked to reflect on the questions it raised about identity. As old census categorization and contemporary politics demonstrate, we live in a world in which people are too often reduced to and defined by labels. Ballet Hispánico, by inspired intention, points us toward an appreciation of the extraordinary richness of history and culture, and our capacity for respectful, passionate, creative evolution.