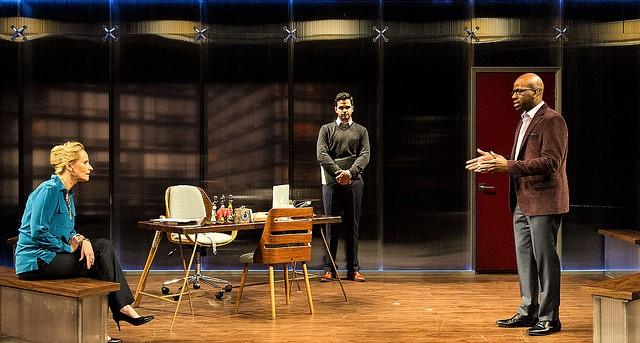 “Ambition must exceed the dream.”

Art often imitates life, they say, but when life begins to imitate art, still unproduced art, that is really something. This season’s opening play on the Nikos Stage at the Williamstown Theatre Festival, “The Model American,” seizes onto the current white house resident’s angst about immigrants coming to our country and taking things over. Playwright Jason Kim and director Danny Sharron began exploring this more than a year ago and came to Williamstown to write, test and work out the kinks in this play about an immigrant man who literally plays out his own, personal version of “how to succeed in business without really trying.” These two gay men who share, somewhat, this immigrant experience, know what it means to make the move to citizenship and into the corporate zeal that marks Americanism. What they have put onto the stage is a miracle of steps into what it means to be an American, a Trump-like American.

Gabriel is Hispanic, I am not sure from where, but seemingly through the Florida connections. He is smart; he can lie; he can turn sympathy into empathy. He is the very model of a modern-day American. He has the smart sleeves under which he can conceal his dynamic weapons. When he is caught in his lies, he can move you with this emotional pleas. When he is needy, he can push the envelope and convert someone unsure of his emotional state or even his sexuality into his lover. He is manipulative in ways never conceived of by J. Pierrepont Finch or his creator Shepherd Mead. This non-musical variation on the book and musical plays out very differently and its poignant ending makes so much sense if we are to like the main character in this play at all: he must exhibit a conscience and in this play, I believe he does.

Playwright Kim opens and closes his play with a speech in Korean delivered by a character not central to the drama, Jae Won, played here sweetly and sincerely by Han Jonghoon. Knowing the origin of the playwright we are instantly led to assume that Jae Won is the principal character, but he isn’t. Instead that role is given over to the Hispanic Gabriel who does not represent either the author or the director which is a very clever shift, not anticipated. Jonghoon, by the way, is a charmer who plays both the highpoint comedy and the lowpoint melodrama of personal defeat with a subtlety that is pure and magnificent.

In a similar role Sheria Irving plays the girl Cora whose brother starts Gabriel off on his meteoric rise. Cora has been in and out of rehab her whole life and, late in the play, discovers religion and its potential. Her scene with Gabriel, of whom she has heard from her unhappy sibling but whom she does not recognize, is one of compassion and understanding and trust that is devastating for us, knowing what Gabriel’s role has been in the undoing of brother Emmett.

Maurice Jones plays Emmett with outright honesty and faithfulness. He is charming when his character needs to be charming, stringent and professional what that is called for and outraged in a very human way when his faith has been turned against him by someone he believes to be his ally. This is a fine performance with moments that are unforgettable.

One of the people behind Emmett’s losses is Tina, a corporate hog who plays the big stakes, even in small companies. Laila Robins adds another superb performance to her growing list of unusual characters. She is snake-oil charming. She is sexually fence-post sitting. She makes her hostile takeover femme fatale into an inspiring bitch. She is frightening and compelling at the same time and you can almost hear the skin-sizzle when she moves through the office doorway. If this play needed a villain, Tina in Robins hands, would be first choice, but the play has no such need as it showcases the types a true upstart must pass through to get what he wants.

Micah Stock plays the one true-hearted human being in the play, an unfortunate young man of wealth and background who falls in love with the play’s protagonist. Jude is so needy, and so able to provide the material aspects of American life that Gabriel longs for that our immigrant takes what he can and gives what he must until he finds another way to achieve his material success. Stock is wonderful as the awkward lover, the emotional lynch-pin, the eager partner and, ultimately, the spurned provider. If this play has any heartbreak in it, that emerges through Stock’s unique style of experiencing it for us.

Hiram Delgado is truly dynamic portraying this man on the rise. He is handsome, has a commanding stage presence and he moves into and out of his character’s ever-altering circumstances like a veritable Ricky Martin. Delgado acts even to the point of allowing his character to act when needed, a double-step that is fascinating to watch. In his relationship scenes with Micah Stock there is a sincerity and honesty that is most believable. His final scene is so strong that Gabriel’s inability to express anything says so very much as his new-found American dream puts him a place of ultimate vulnerability. In today’s American world he is left with only the choice of sallow skin color or the green of the almighty dollar. His decisions are not immediately known, but his outcome is predicted by the circumstances of the script.

This one-act 90-or-so minute play will certainly have a life after Williamstown, but I doubt that a better company will be playing it anywhere else. The house was sold-out, so if this idea grabs you, get your tickets while you still can. For this outing there isn’t a bad seat in the theatre, but there may not be one left in the short-term.

The Model American plays on the Nikos Stage at the Williamstown Theatre Festival’s ’62 Center for Theatre and Dance, 1000 Main St., Williamstown, Mass., through July 9. For tickets and information, consult the Berkshire Edge Calendar, contact the box office at 413-458-3253, or go on line to wtfestival.org.