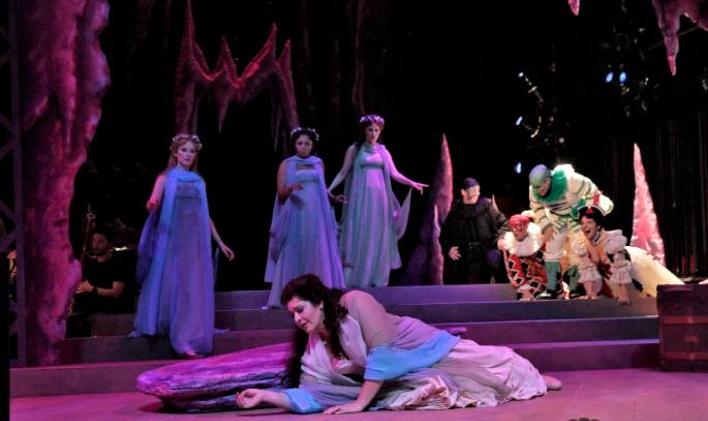 The eighth of 17 operas by Richard Strauss was the second version of Ariadne auf Naxos, the version being performed in Pittsfield, Massachusetts, at the Colonial Theater by the Berkshire Opera Festival company. Always a delightful experience, this comedy is being given a step up from that description into the realm of gorgeous by this group. As their second production (last year’s was Puccini’s Madama Butterfly and next year’s is Verdi’s Rigoletto) this move into the German repertoire is a risky one for the young company. Not a popular favorite – although I don’t know why – it is also from a 20th-century school of opera that does not appeal to everyone, unlike last year’s most popular work and next year’s, as well. It is wonderful that this fledgling company took the risk to bring this to the Berkshire public, because its glorious music and this stunning physical production also brings an extraordinary cast to our local stage.

The prologue has been set by director Jonathon Loy in contemporary Vienna and the supertitles expose a modern take on the dialogue that librettist Hofmannsthal gives us. Two works have been commissioned by “the Boss” and he has decided he needs them performed in peculiar tandem so that his guests can relish the fireworks ordered for 9 o’clock. The reactions from the Prima Donna and the Composer are definitively 21st-century and they work wonderfully.

The opera itself, with its commedia dell’arte interjections, is performed in perfect 18th-century apparel and style. With the large orchestra of 38 players on stage (stage right) and the show performed on the opposite side of the stage, it seemed almost a given that the sound would be unbalanced and out of proportion. However, this is opera, folks, and unmiked and the balance between musicians and singers was exemplary. Conductor Brian Garman must be congratulated for creating the perfect harmony among his artists.

The fine set was designed by Stephen Dobay and the perfect costumes are courtesy of Charles Caine. Emotionally effective lighting was provided by John Froelich. Sara Erde added choreographic movement to the show, which enhanced the fine staging, and concept, of Jonathon Loy.

Sixteen singers make up the entire company (there is no chorus in this work), each playing two incarnations of their characters–the singers and their roles–except for those who appear only in the Prologue. Chief among these is Adriana Zabala as the Composer and Kyle Pfortmiller as a Music Teacher along with Chuck Schwager as the Producer. Schwager has the essential spoken role, a man in control who does the bidding of the Boss (never seen) and forces the two different companies of players into their situational dilemma. He delivers nicely in the role. Pfortmiller sings beautifully as he defends his student’s right to have his work heard perfectly as conceived. Zabala has the richness of the role to play, a young man whose talent is music and whose inclination is to love sopranos. She gives a strong and healthy impression with her strong mezzo-soprano tones to the firmness, and the finesse, of the unnamed artist. I have always felt that the authors were playing here with their own sense of unreasonable anonymity as creators of a work brought to life by the vocal artists they employ. Zabala brings that very sense of compassion to the role making her voice ring with the occasional hollow tone that expresses the loneliness he feels seeing his Diva and meeting Zerbinetta, queen of the comedians. This is a superb performance.

Strauss has a compassionate link to the female voice, using trios to impress us with the splendor of their sounds. In this opera he has three women whose voices rarely are heard together and three more who act as an intimate choir in the second half, the opera. Naiade (Jeni Houser), Echo (Christine Lyons) and Dryade (Rebecca Ringle) hover around the soprano diva playing Ariadne and croon narrative and express empathy and harmonize and counterpoint and lushly enhance the dramatic elements of the show. Each is lovely: lyric soprano, dramatic soprano and mezzo-soprano; each becomes ubiquitous, another instrument in the ensemble, but able to voice thought rather than just express it with tone. In fact, the vocalizing in this production is truly extraordinary with every word sung clear as a bell.

Marcy Stonikas as the Diva/Ariadne brings a strong, dramatic Wagnerian tone to her delivery and she manages to sing with strength and clarity while standing up or lying down. Her Ariadne is amusingly stiff and classically rigid and her Diva is emotionally packed for a reality jab at anyone who might offend her. She plays both styles to perfection. Zerbinetta is a delight as performed by Nicole Haslett. Her lyricism is divine and her coloratura work in her lengthy aria is gorgeous in tone, delivery and the dynamics of character. Both women are special talents who do everything Strauss would have expected of his two stars.

Kevin Ray as Bacchus has a strong voice that becomes a bit pinched at the top, but his acting in the role of Bacchus was ideal: stiff and non-sharing of space until forced to become Ariadne’s partner in every way. His was an enjoyable performance. Samuel Schultz as Harlekin was ideal and Spencer Viator in his double roles as Brighella and Dancing Master was amusing and charming and vocally equal to anyone on stage. Chris Carr was a fine Scaramuccio and Matthew Scollin sang very well as Truffaldin.

An opportunity to see a beautiful production of this opera in a local setting comes only occasionally and this is one not to miss. I keep trying not to say “perfect” and “perfection” while writing this notice but, alas, I must use them now. This perfect production, with such superb singer/actors and so many fabulous musicians – listen for the bass trombone solos in the second half played to perfection by Brian Diehl – is a must-see for anyone who knows and loves opera and anyone who just enjoys very good theater.

Ariadne auf Naxos, which opened Aug. 26 for a three-performance run, plays again at the Colonial Theatre on South Street in Pittsfield, Massachusetts, on Friday, Sept. 1. For tickets and information, see the Berkshire Edge calendar or call the Berkshire Opera Festival box office at (413) 213-6622. 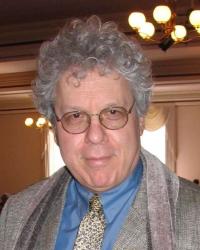