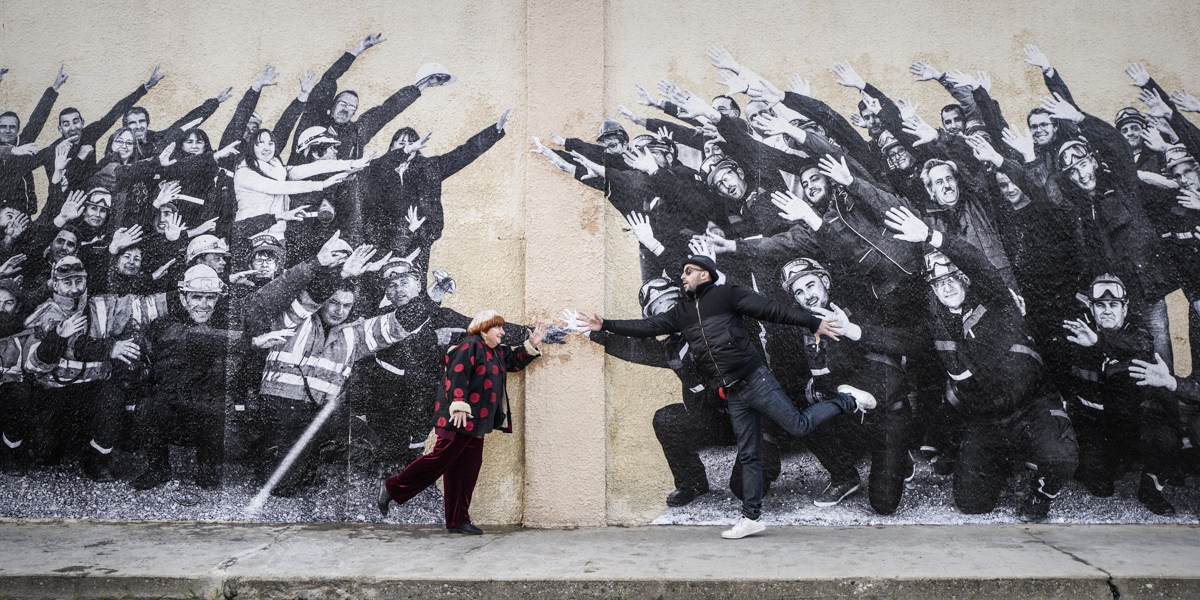 New York — The 55th New York Film Festival is underway with an engaging and sometimes exhilarating panoply of new films (25 main slate feature films, 18 documentaries, and much more). Women directors are happily very well represented, and the press screenings began with 2 terrific films by well-known women directors — Agnes Varda and Agnieszka Holland — who have been working for decades in an industry that remains overwhelmingly dominated by men. Varda has made many films in France since the early ’50’s — the only woman in the famous French New Wave (e.g., “Cleo from 5 to 7” — about a woman wandering around Paris waiting for the results of a breast cancer exam); Holland, two decades younger, started out in ’70s Poland, then France, but mostly America. (My favorites of hers — neither one made in the US, as it happens: “Angry Harvest,” about a farmer who during WWII hides a Jewish woman in his cellar and then becomes attracted to her — and “The Secret Garden,” from the great British children’s book).

I have had the good luck to interview each of them a number of times over the years for film publications, and thus to closely watch their development and struggles. And now these two are old ladies, feisty, seasoned, and accomplished, and it does my old woman’s heart good to see them so triumphant this late in the game. What’s more, their new films — “Faces Places” by Varda, “Spoor” by Holland — put old women at the very center of the screen, spirited and beautiful old women.

In Varda’s case, the old woman on the screen is 88-year-old Agnes Varda herself, traveling around rural France with a 33-year-old jokey photographer who calls himself JR and refuses to remove his sunglasses. They banter playfully, they seek out communities of working people, who are charmed into participating, and who allow huge photographs to be taken of themselves, which are then pasted on walls of houses and other sites. The fact that Varda, always a maker of marvelous images, is now having problems with her vision gives these enlargements an extra layer of feeling.

The focus of attention shifts and wanders — though actually it’s all carefully and delicately choreographed — from the old hard lives of miners in the North, their giant images all that is now left of them in their deserted village; to a farmer; a waitress; longshoremen around Le Havre, and their wives. In one scene the three wives are positioned high up inside an immense wall of shipping crates, one of many remarkable shots, as they voice different reactions to their perilous perch. “Faces Places” moves toward the bitter-sweet conclusion of a trip to visit filmmaker Jean-Luc Godard, which puts Varda in touch with her early time in the great pioneering years of French cinema, and with her late husband director Jacques Demy — and it closes on a touchingly mixed note of hurt, loss, forgiveness, love, and a blessing of acceptance. Her finale? I’d never count this indefatigable woman out. The film is categorized as a documentary but like her many other earlier documentaries (“Gleaners,” for one) it’s its own thing, rich and rambling, funny and poetic, life-affirming and humanistic, inventive though sometimes a little too cute, but for me very appealing and worth the effort of a trip to the city to see, if it doesn’t show up at the Triplex.

Agnieszka Holland’s “Spoor” (terrible title) is, on the other hand, constructed on a grand scale, and at its core is truly a blessing, of the earth and of all living things. It begins with exquisite long shots of landscape and of the protagonist walking her beloved dogs in the beautiful light of the rising sun, raising her arms in adoration. And the film is full of stunning images of woods and the animals scurrying by or standing in watchful grandeur. Duszeiko is a recent arrival to this wild locale on the Polish-Czech border, and her gentle radiantly caring manner has made her beloved by the children she teaches, and by a young woman in an abusive relationship. But Duszeiko comes into fierce conflict with the hunters who dominate here, as they prevail in Poland generally (“like a boys’ club,” Holland said in a recent interview in the Guardian, “where men are free to talk, like Donald Trump does to his buddies, about sex and power.”) Duszeiko does battle with the priest who condones their violence, and with the police who treat her like a nut, as she protests passionately against the senseless killing of fellow creatures — all structured within a murder mystery, the hunters becoming victims of a serial killer.

There are Polish political undertones here, it should be noted. Holland now sees her film, and the book from which it comes, as prophetic of the 2016 election of a far right nationalist government — which she regards as part of a counter revolution that also includes Russia and the U.S., bringing to power men with a “populist authoritarian agenda that places women’s rights and nature preservation in the front line of attack.” (It’s no accident surely that Trump and Bannon made a special visit to Poland very early on, laden with effusive congratulations). She also notes the disillusionment of women of her generation, and yet their fierce current activism. Shaped early on by an Eastern Europe alive with revolutionary ideas for changing the world, Holland through her heroine summons up all that fervor in protest against the destruction of nature — like Duszeiko, “not just thinking of her family but of the voiceless wider world.”

But one doesn’t need to know any of this background to feel the power of this film, full of strong emotion, graceful camera movements, a very persuasive central performance. And powerful above all for its eloquent expression of our sense of the desecration we humans have subjected the earth to, the grief we hardly let ourselves feel over that, and the sense of an older woman as a heroic maternal figure, healer of the wounded, seeing our world as holy. Music and settings are used to keep the pace flowing, to build tension, and also to enlarge this theme. And everywhere is the simple aesthetic pleasure of lovely textures and forms. Gratefully, Holland permits her characters a happy ending, and even allows late romances into this elderly heroine’s life — giving the film the feeling of a fable. And she leaves us too with a benediction that things will change again, and the terrible destructive forces will not remain in charge. Ecological, feminist, and beautiful, “Spoor” uses to good purpose all the skills Holland has developed over these decades. I think many will find this film — even though in Polish — as moving as I did.

“Western” is the very first feature film by German woman director Valeska Griseback, and boldly centers on a group of German male workers who come to a remote part of Bulgaria to install a water system. A latecomer joins them, Meinhard, a man apart, weathered and lanky, and as tensions build among the men, and as they show their callousness to the Bulgarians with whom they can’t communicate, Meinhard is increasingly drawn to the Bulgarian Others. This is not a film likely to get much distribution, for all the intelligence of its quiet layering of interactions, but I found it of considerable interest.

Rebecca Miller’s documentary “Arthur Miller Writer” which will be shown on HBO, is for me an exciting and revealing piece of work. As a serious filmmaker in her own right, Rebecca Miller is perfectly poised to give us the deepest and most complete picture we can ever expect to have of her father, his remarkable achievement and how he thought about it, and the shifts in his life from the early formative years to his enormous success to the great critical neglect he faced in his later years. Honoring truth as much as he does, he speaks about himself and others in his life — his father, Elia Kazan, Marilyn Monroe, his wife photographer Inge Morath, living in NW Connecticut — with frankness and depth, and the whole film is filled with a largeness of mind and spirit that reminds one of how little we encounter this these days.

Several films in the Festival show Europe attempting to grapple with difficult social problems of recent years. Aki Kaurismaki, a Finnish director whose films I have loved for their jaunty deadpan humor, poignance, and an almost hand-painted beauty, deals in his new film “The Other Side of Hope” with the situation of a stowaway Syrian refugee fleeing the ravages of war in Aleppo and an older man in process of changing his life — leaving

his wife, his work, and opening a restaurant. The film has us look closely at Khlaed (and those around him in similar circumstances) — as, even in the most enlightened of countries, he finds himself in trouble with impersonal bureaucrats, police, and vicious skinheads, but saved by a variety of good hearted people. All of which this director manages without ever seeming to deliver a message, without losing his light charming touch and his terrific use of music and odd old-guy folksingers. It may be an imperfect film, but who cares–it is a great pleasure to see and far more satisfying than many a smoother product, and I heartily recommend it.

“The Florida Project” by Sean Baker is a disturbing film about the lives of unsupervised kids in a Florida motel, running around freely with boundless energy and high spirits, and about their single mothers. The woman and child the film focuses on are I guess what is called “white trash” or “on welfare,” and we are given no reasons or backstory for why this young person, who seems to love her child, never makes a move to work, bumming money from passers-by, trying to sell stolen articles, not a bad person but a disaster waiting to happen. Nothing is sentimentalized here, the children for all their engaging vitality use ugly and disrespectful language, they set fire to a house, the mother elicits the tacit disapproval of her mostly Black motel neighbors, particularly when she briefly resorts to selling her body. But some are kind, especially the motel manager solidly played by Willem Dafoe, and all have sympathy for the child. It’s presented as an insoluble situation — against the humorously surreal tacky background of a Florida commercial strip near Disneyland — and though without depth or subtlety, with no internalilty at all, it’s skillful in creating a world that lingers in your mind.

A final brief word about a remarkable film dealing with the AIDS epidemic in France, called “BPM (Beats Per Minute),” written and directed by Robin Campillo, who was scriptwriter for Laurent Cantet’s amazing “The Class’ of 2008. “BPM(Beats Per Minute)” takes us back into the painful and valiant late ’80s: into ACT UP meetings with dramatic debates about strategy, confrontations with recalcitrant drug companies dragging their feet, street demonstrations like parties, the necessity above all else to make a lot of noise since Silence Equals Death, the urgency of beautiful young men (and a few women) fighting to stay alive and to get the social order to care about them. It also takes us into love stories, intimate bedroom sex, tender courageous caretaking. I must say I had tears in my eyes through the whole long film, and found it a thoroughly engaging piece of work, a feature film that felt just like a documentary, and a fitting memorial to a terrible time.

Part two of this coverage will include films by Todd Haynes, Richard Linklater, Woody Allen, Claire Denis, Noah Baumbach, Greta Gerwig, and others, and I can’t wait to see them myself! So, much more to come.