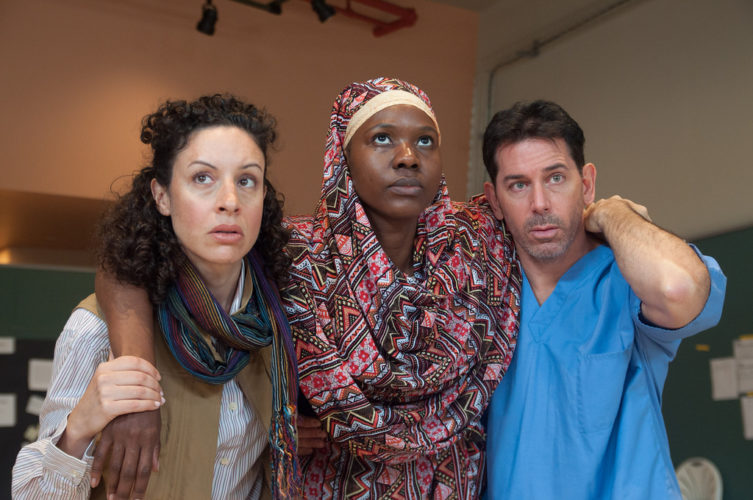 “…perhaps an exaggerated belief in the proverbs of African women…”

The morning of the day on which I saw “In Darfur,” WAM Theatre’s production at Shakespeare and Company in Lenox, Mass., I watched the HD telecast of San Francisco Opera’s “Porgy and Bess.” One thing really has nothing to do with the other. However, both are difficult, turgid stories concerning people whose racial existence within a community makes them targets. In this case both productions are directed by white women. The Gershwin Opera was directed by an internationally recognized star director, Francesca Zambello and the other by the locally well-regarded Kristen van Ginhoven. Everything one might have expected from Zambello did not exist. The show was a failure in concept, design and direction from start to finish. van Ginhoven, on the other hand, delivered a power punch of a play realized with a mighty imagination and a clarity of vision. This sort of work makes me proud to live in The Berkshires where wonderful talent abounds.

I was impressed with the story and the writing by author Winter Miller. I was impressed with the physically raw performances by the cast of seven actors. I was impressed with the look of the play and the way in which set designer Juliana Von Haubrich moved pieces around and used Brad Berridge’s projections and sound design to take us from place to place and from emotion to emotion. Natalie Robin used standing lights and moveable lights to give both illumination to the performance and focus to the drama. I loved the African look of Govane Lohbauer’s costumes which brought the dark continent a personal sensibility on the very Off-Broadway stage. For eighty-nine non-stop minutes these elements never gave me less than I needed to feel transported into a situation that could not be farther from anything I have personally experienced before.

the action, like it or not. From the third scene of the play onward we are there, not in a rehearsal room, a theater or an educational space, but there, in Darfur, in Sudan in 2004. This director, instead of addressing us as Zambello did in her amateur “Porgy” opera, pulls us into the action and acquaints us intimately with the people and their situation. This makes for very exciting theater.

The director has a remarkable cast and she has given them sound and strong direction motivating performances that never relax, even for an instant. Tricia Alexandro plays Maryke, a New York Times reporter on assignment in Sudan, a woman determined to alert an inconsistent readership with the details of genocide in a province in Africa that none of them have even heard of before. Watching Alexandro put the moves on an innocent, troubled and tragically abused young Darfuri is akin to watching a tornado proceed across Great Barrington — dark, forboding and unrelenting. Maryke is a downright determined force in this actress’s hands. Half heroine and half villain, as this actress and director see her, she is so very compelling to watch.

Hawa, the young Darfuri English teacher on the run for her life, is exquisitely portrayed by Sipiwe Moyo whose future career seems absolutely assured if this is an example of her work. From her first line, about a Mango stand, to her final brave march across the stage she is always the character she portrays. We feel each and every pang of pain, every instant fear, every memory of sadness that she expresses. She is a wonder to behold.

Christina Gordon, playing the Times editor Maryke reports to, was all business and, to my surprise, easily defensive when maligned. This and her other characters were well defined and felt absolutely right. Shannon Harris as the ultimately lost Hamida was moving and beautiful. The two men who played all sides of the political picture here, marcus d. harvey and Warren Jackson, did fine work, always clear and believable.

Carlos, the Argentinian medic caught up in the anxious conflict Maryke brings into an already difficult situation, was played superbly by Rich Lounello. Here is an actor who can react with a brilliant flair of anger and still seem compassionate. In the play’s few moments of humor he came and went through those situations with a gentleness that felt absolutely genuine. Though not the focus of the play Lounello’s Carlos became the ground wire keeping things stable and as safe as possible in the turmoil of torture, death and racial hatred of the Sudanese Janjaweed for the Darfuri people.

This play deals with so many issues, so many questions. In its single act covering several days and weeks it pursues them with true guts. Genocide and racial cleansing are dangled on the arrowhead of the piece and moral responsibility of outsiders colors the shaft. Human reaction: love, trust, motherhood all adorn the tail of this arrow that pierces our collective conscience. We know some things by the end of the play, but we never do know what happens to the three principals. Even Hawa’s final exit, a baby in her arms, leaves more questions than answers lingering on the slow fade of light that follows her. This is extraordinary work from the actress, the director and the designer. This is great theater (eat your heart out Francesca Zambello) with its direct simplicity and emotional stoppers.

This is a short run. New performances have been added to accommodate a growing desire for tickets. If you hesitate you lose; that’s the message of this review and it may well be the message of the play.

In Darfur plays in the Berry Family Studio at the Elayne P. Bernstein Center on the campus of Shakespeare and Company located at 70 Kemble Street in Lenox, Mass., through November 16. For information and tickets go to The Berkshire Edge calendar, to www.shakespeare.org or www.wamtheatre.com or call the box office at 413-637-3353.

In keeping with WAM’s philanthropic mission 25 percent of the box office proceeds will be donated to the Mother of Peace Illovo orphanage in South Africa where 13 woman have dedicated their lives to raising children who have lost their families.