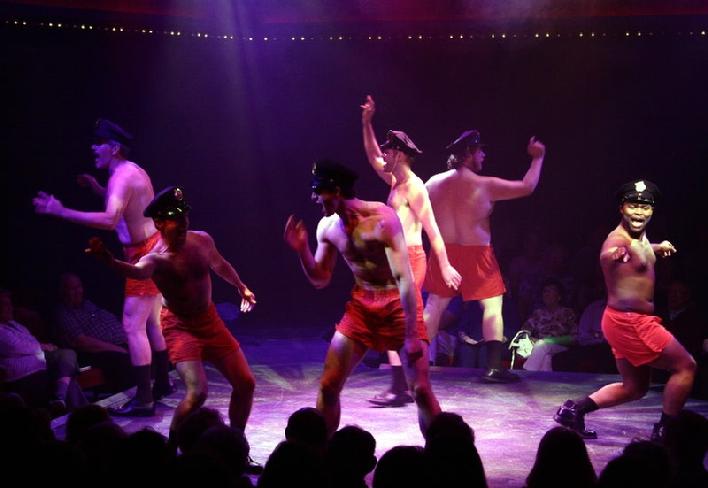 Music and Lyrics by David Yazbek

“If you want to be in show biz, you oughta be spayed first!”

If you want to be in show biz, and there are six men in this show who definitely do NOT want to be in show business, then you need a very good reason to desire such a fate. Jerry Lukowski has just such a reason: self-respect. An out-of-work steel worker in Buffalo, N.Y., Jerry is the divorced father of a very bright 12-year-old son who wants nothing more than to see his father’s faith in himself restored. When a troupe of Chippendale Dancers open in Buffalo, attracting enormous crowds of women willing to spend whatever they must to have a good time at the expense of the men ,Jerry gets a bright idea. He and a few other laid-off workers can do the same sort of thing, make a lot of money by just dancing and disrobing and get back their self-respect with their new ability to pay off bills, support their kids and even deal with alimony. It’s a great idea (except for the moment of humiliation). Then he has to put it into play.

Based on a British film with the same title, this musical was first produced in 2000 and ran for nearly two years (770 performances) producing only one hit song “Let It Go,” the finale. It featured Andre DeShields, Jason Danielly, Kathleen Freeman, Emily Skinner, Patrick Wilson and others in a large cast. On stage at the Mac-Haydn Theatre in Chatham, N.Y., George Dvorsky, Monica M. Wemmitt, Gabe Belyeu, George Belliston and Paul Wyatt head a talented company in a theater-in-the-round version expertly directed by John Saunders and choreographed with humor and brilliance by Kurt Boehm.

Just in case you don’t know what the “full monty” means, it indicates that a male strip act will go all the way and reveal everything. This is always a tough task in a family-oriented business and as with all other productions of this show that I’ve witnessed, the audience is filled with women, young and old, all of them crowding the first few rows to catch a glimpse of that final moment. Saunders cheats his audience of that in a nice way, but with a circular stage, with men facing in all directions, there is a clear view of someone’s bare posterior no matter what else you “don’t” see, so all efforts realize some results.

Gabe Belyeu, who has been delighting audiences here for a few seasons in roles as disparate as the drag star Albin in Jerry Herman’s “La Cage aux Folles” and Javert in “Les Miz” takes on the pivotal role of Jerry in this show. His is a clean, clear reading of a difficult role, a man down on himself, ashamed to spend time with the young son he loves, willing to do anything in his power to change all that. His acting and his singing are clarion calls to a God of disinterest, a God Jerry inspires to have faith in a man. When he falters, as many prophets do at a crucial moment, he is pulled back into line by his son, played wonderfully here by Bailey Lapo-McDermott. The two react to one another with an honesty that is goose-bump thrilling. Having them as the core of the corps of players is a bit of perfection.

As Jerry’s best friend Dave Bukatinsky is the actor Geoff Belliston. Dave obsesses about his overweight and Belliston makes the most of that singing with a sense of pride and dancing with an unexpected grace. His performance of the reluctant love scenes with his wife, nicely portrayed by the ever-lusty Jenny McGuinness, is perfect, his incidental duet “You Rule My World” with the character Harold as they loom over their sleeeping wives the most moving moment in the show.

Harold is played by George Dvorsky, a guest artist for this production, well known for his stellar appearances on Broadway. Dvorsky plays a former steel executive, also laid off and afraid to tell his wife, Vicki – played here by a beautifully blonde-wigged Monica M. Wemmitt — that he is jobless. They dance duet to her song “Life With Harold” which almost stops the show cold. They’re a wonderful team and I wouldn’t mind seeing them together again in something else, something that gave them more time together.

Shy Malcom MacGregor, played by Paul Wyatt and klutsy Ethan Girard, played by Eric Chambless make a sweetly comic coounterpoint to the more serious dilemmas of the other four men. Both play their roles with charm and an appeal that is always a relief element in this rather serious play. Ariel Padilla, as “Horse” lives up to his nickname in unexpected ways and Rhnea Wright-Ausmus as Jeanette Burmeister, the piano-playing booster makes a hit in each and every one of her appearances on the stage here.

The ensemble in their principal roles and their chorus roles are just what the show needs to succeed. The production settings were well wrought by Kevin Gleason and the lighting by Andrew Gmoser was lovely (if not able to provide the traditional splatter that allows in other productions the anticipated final moment). In spite of the serious subject matter and the stripping, this is a perfect show with which to bring to a close the principal season (there is a fall show to come) for this best of all summer stock houses in this region. Classic summer musicals are expanding their scope. I saw this three hours after the curtain came down on a more traditional sort of show, “My Fair Lady” and as “The Full Monty” began its rock-inflected stage musical sounds all I could think of was how perfect a day can be when my heart and mind are stretched to these extremes.

The Full Monty plays through the end of the month at the Mac-Haydn Theatre, located at 1925 Route 203, Chatham, N.Y. For information and tickets, call the box office at 518-392-9292 or go on line at www.MacHaydnTheatre.org, or consult The Berkshire Edge calendar for tickets, show times, and all future productions.