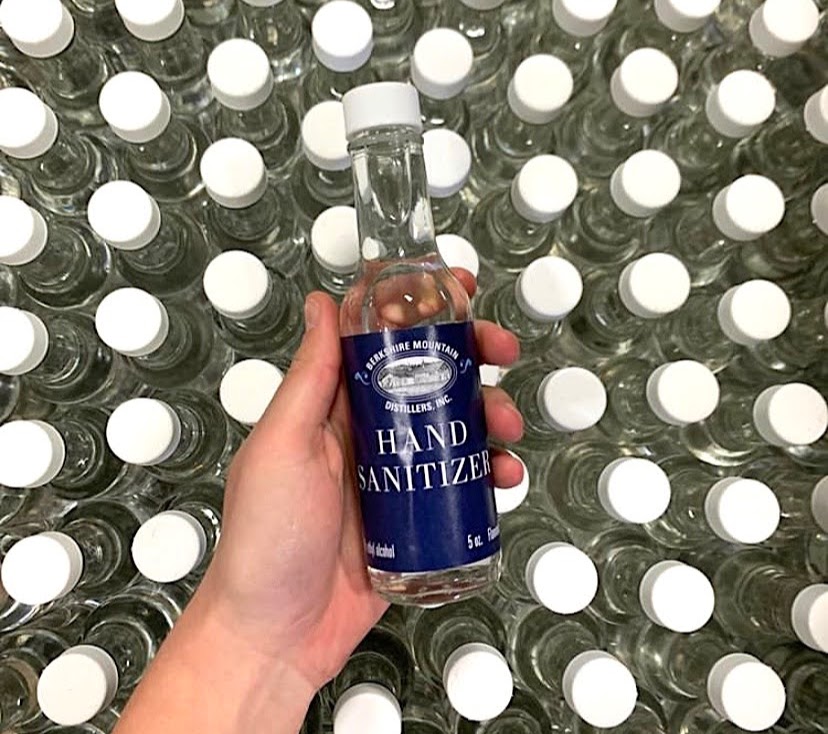 Sheffield — With the onset of the COVID-19 pandemic, there has been an epidemic of panic buying, creating national shortages in many important goods, including hand sanitizer.

In order to combat this deficit in Berkshire and Litchfield counties, local distilleries have begun the process of making and selling alcohol-based hand sanitizers. Berkshire Mountain Distillers and Litchfield Distillery are among the multiple establishments to stray from their award-winning spirits and become a temporary hotspot for sanitizer.

Beginning in March, the Alcohol and Tobacco Tax and Trade Bureau decided to temporarily waive certain formula approvals to make hand sanitizer as well as expedite some permit requirements to help increase production of these sanitizing products.

Chris Weld, owner and founder of Berkshire Mountain Distillers, found himself in a fortunate position, for he had already begun gathering supplies before the federal laws were changed in the hopes that he could eventually produce the sanitizer.

Within two days of the loosening of the restrictions on hand sanitizer production, BMD had already designed a label, bottled the product and delivered it to various local emergency service squads.

Litchfield Distillery — based in Litchfield, Connecticut, and distributed in the Berkshires — didn’t hesitate to begin production of sanitizer, either. Unable to find traditional hand sanitizer in stores, Litchfield Distillery co-owner David Baker explained that “somebody had to fill the need, and we had the ability to do that.”

Both distilleries had similar recipes for making the hand sanitizer, for both of them carefully followed the World Health Organization’s guidelines for production. BMD’s active ingredient is a 75%-85% ethanol blend. Originally BMD used its unaged bourbon and gin in its sanitizer, but has since moved to a cheaper method of making alcohol through the fermentation of sugar.

Alongside the ethanol, hydrogen peroxide and glycerin, BMD has added a denaturing agent to its hand sanitizer. “Either you can put something poisonous in it, which we opted not to do, or something that just tastes so god awful that nobody wants to drink it, which is what we did,” explained Weld.

While the majority of the product is donated to first responders and local organizations in Berkshire County, including the COVID-19 response center in Pittsfield, Railroad Street Youth Project and food banks, it’s estimated that BMD sells around 1,000 bottles of sanitizer weekly to the community.

Hand sanitizer can be purchased at BMD Monday through Friday from noon to 5 p.m., in 4-ounce bottles for $8 and 1 quart for $32. Online purchase is currently unavailable for hand sanitizer.

While Litchfield Distillery’s initial intent was to provide its product to first responders “so that the people that were going out to help were being safe as well,” the distillery also provides sanitizer free of charge to all members of the community, said Baker.

Litchfield Distillery provides a self-service honor system outside its establishment. It encourages customers to limit their haul to one bottle per person per day. Since the beginning of its sanitizer production, Litchfield Distillery estimates it has given away around 50,000 bottles.

Many Berkshire County residents commend these local distilleries, for it “is a true statement on their commitment to meeting the needs of the community and I applaud their approach to doing so,” North Adams City Councilor Benjamin Lamb said in an email.

Lamb, who keeps his own bottle of BMD’s hand sanitizer in his car, is grateful for the speed at which BMD pivoted from its spirit production. Just as well, the way in which it scaled its sanitizer manufacturing “was immensely valuable and appreciated,” said Lamb.

While Weld is grateful he has been able to “keep the lights on and the crew busy,” he’s “looking forward to the days of life post sanitizer.”