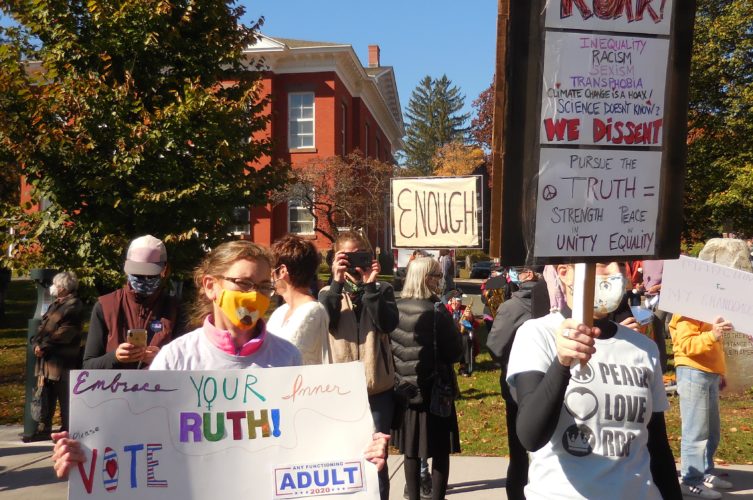 Brigitte Collins (left) of Milton and Stacey Sears of Dalton display their views at the Women's March in Great Barrington.

Great Barrington –– About 200 people — some from as a far away as Springfield and Northampton — descended on Town Hall Saturday afternoon (October 17) demanding action on a list of progressive causes and sounding off against the policies of the administration of President Donald Trump. 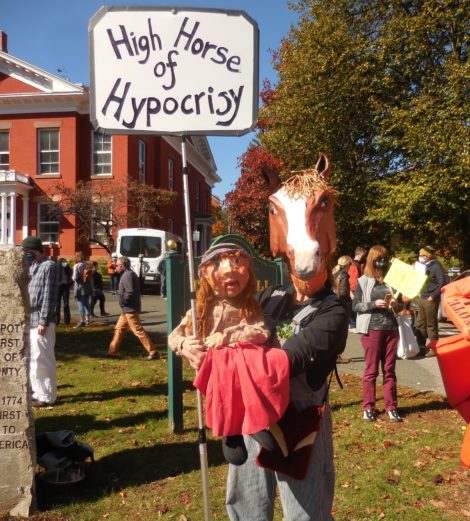 The event was one of more than 250 nationwide held in conjunction with the national Women’s March movement that began shortly after Trump took the oath of office in January 2017. At that time, a march in Pittsfield attracted about 1,500 sister marchers.

Protestors today in Great Barrington wore colorful outfits, carried signs and chanted about the women’s issues that have driven the movement from its inception, including: abortion rights; gender discrimination; domestic violence; and sexism.

But a lot has changed since then, most notably a global health crisis; a severe economic recession; the #BlackLivesMatter movement; a presidential election year; the resurgence in white nationalism, along with a president who seems to encourage it; and the death of Supreme Court justice and progressive icon Ruth Bader Ginsburg, followed by the last-minute nomination by Trump of the very conservative Amy Coney Barrett to replace her.

“Women in this country are bearing the brunt of multiple crises, including the COVID-19 pandemic, white supremacy and nationalism, an ever-deepening economic disaster, a worsening climate crisis, and a family/domestic care crisis,” organizer Mariana Cicerchia said in advance of the event. “From Great Barrington to Garberville, women are rising up to demand a new government of, by, and for the people.”

See video below of young people making statements on the front steps of Great Barrington Town Hall. One of them, Deisy Escobar, read a sharply worded statement sent by Sen. Ed Markey, who was invited to the event but was unable to attend:

There was also plenty of entertainment, including music by the Hoping Machine, Berkshire Batteria and dancing by Berkshire Pulse, a performing arts school in Housatonic.

See video below of students from Berkshire Pulse performing in front of the Mahaiwe Center for the Performing Arts on Castle Street:

In an interview, Mariana Cicerchia, a Great Barrington resident, termed the event, the only one of its kind in Berkshire County, “pretty successful,” though she was looking for a larger turnout.

“It’s the first event I’ve organized, though I’ve been going to marches and protests my entire life,” Cicerchia said. “I was looking to do something local and traveling to D.C. was not my preference, so I looked around in our area and saw that there wasn’t anything happening.”