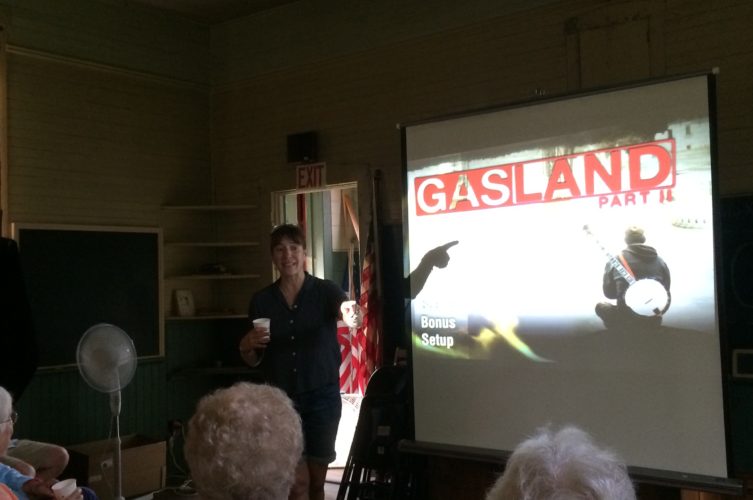 Richmond – Opposition is spreading across the Berkshires – and beyond — to the Kinder Morgan high-pressure gas pipeline that would convey gas from the fracking fields of Pennsylvania across Western Massachusetts to East Coast ports for export, on behalf of Tennessee Natural Gas (TNG).

Twenty of the 30 Massachusetts towns in the pipeline’s path, including Lenox, have so far adopted resolutions opposing the pipeline. A special town meeting has been scheduled in Richmond on July 9 at 7:30 in the elementary school to consider a similar nonbinding resolution.

Richmond opponents of the pipeline have already collected 220 signatures on a petition requesting the Board of Selectmen take a stand against the project.

In the meantime, on Sunday, July 6, Hilltop Orchards on Route 295 will be the starting point for a rolling march through Massachusetts to oppose the pipeline network and to protest the production of natural gas by the environmentally destructive method of fracking, whereby a mixture of water and toxic chemicals are driven deep into the earth to break apart shale where natural gas is trapped.

Sponsored by the Massachusetts Movement to Ban the Proposed Pipeline, the “Celebrate Massachusetts Fossil-Free Independence Day”commences at 11 a.m., with music, speakers and food in the Orchard. The rolling march itself begins at 1 p.m., and will proceed for 5.5 miles down Route 295 to Route 41, then over to Church Lane to Sleepy Hollow Road, thence to Dublin Road to Lenox Road and Swamp Road, ending at Bartlett’s Orchard. There will be transportation back to Hilltop Orchards.

(In Berkshire County, opposition to the Kinder Morgan pipeline is also being organized by 350.Berkshire that is affiliated with 10 other regions in Massachusetts and is a volunteer driven movement that addresses the pressing issue of climate change by organizing campaigns that promote sustainable renewable energy practices and stopping fossil fuel infrastructure from expanding. It’s next meeting is July 16 at 5:30 p.m. at the Unitarian Universalist (UU) Church, 174 Wendell Ave., in Pittsfield.)

In Richmond Tuesday night (July 1), about 20 opponents of the Kinder Morgan proposal convened in the Northeast School House on Swamp Road to watch “Gasland Part II,” the HBO documentary about the degradation of the water table in eastern Pennsylvania (household water taps would become blowtorches) due to hundreds of natural gas wells that have allow toxic fracking chemicals to seep into the people’s wells. The film will also be shown tonight, July 2, at 7 p.m.

The venue for the documentary had become a controversial topic in town, according to Susan Lockwood, whose property at 1590 Swamp Road abuts the proposed route of the pipeline.

Initially, she said, her group of pipeline opponents had attempted to have the film screened at the Elementary School, but town selectmen blocked the use of the building.

Then, the documentary was to have been shown at the First Congregational Church. Although it was approved by church elders, one congregant complained that the controversial nature of the film violated the separation of church and politics.

“If the town decides it’s too political, we get brushed off,” Lockwood said. “They’re even trying to prevent us from having lawn signs.”

George Wislocki, former director of the Berkshire Natural Resources Council, was in the audience, too, and was flabbergasted.

“They’re trying to abridge the right to assemble, for heaven’s sake,” he commented of the action of the Richmond selectmen.

Lockwood recalled how she was not initially inclined to oppose the pipeline but a presentation by a Kinder Morgan representative changed her mind.

“We’ve been on this land since 1845, and my father had invested in Tenneco,” she said. “But then a very nice person from the pipeline company called up one day, and wanted to come to my house with coffee and donuts. I suddenly realized that the pipeline would be 200 feet from my house, and it was going to be a high-pressure line, with pumping stations to keep the pressure up. They would have to cut down the 200-year-old maple trees next to our house.”

In a statement sent to representatives of the NoFrackedGasinMass, Berwick wrote: “As governor, I aim to set Massachusetts on the path towards becoming the first carbon neutral state. To achieve this ambitious goal, we must double down on aggressive efforts for additional conservation and efficiency, solar, off-shore wind, and hydro power to replace existing fossil fuel sources.

“While we need a ‘bridge’ fuel in the short time until we can power our grid and mobile sources completely without fossil fuels, I am very concerned about the dangers of making any more long-term investments in natural gas infrastructure. Pipeline proposals, including the Kinder Morgan pipeline, create safety concerns in the communities they pass through, and threaten to create infrastructure that lock us into the use of fossil fuels for far longer than necessary. They also will likely invite fracked gas into the state, which I oppose.

“It is dangerous and misguided to support new pipelines unless we have fully exhausted every other option to supply reliable power. We should hit the pause button on new development until this full audit has been completed.”