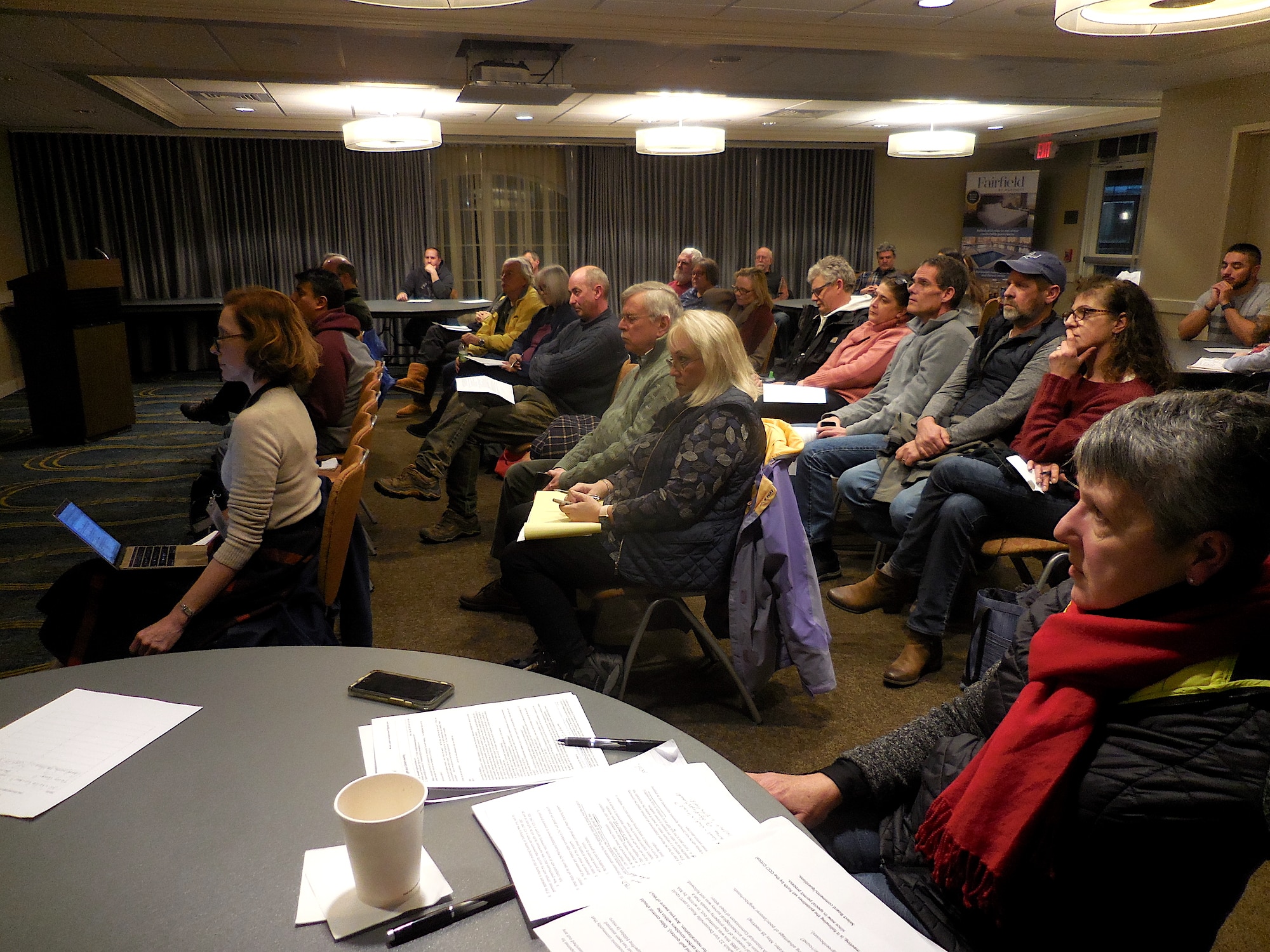 The principals involved in Fulcrum Enterprises’ proposed marijuana cultivation and manufacturing facility on Van Deusenville Road actually had a nugget of good news for the 30 or so angry residents who showed up at the Fairfield Inn last night: they were reducing the size of the project by more than 20 percent.

But that did little to quell the opposition of neighbors who were on edge about the possibility of 13 greenhouses with exhaust fans within earshot of homes they had lovingly maintained for, in some cases, generations.

The atmosphere at the community impact meeting, required by the state of all applicants for marijuana establishments, was occasionally tense, adversarial and marked by mistrust. The attendees who packed the inn’s conference room confronted Fulcrum principals John Heck and David Ross with sometimes hostile questions and sharply worded philosophical statements.

See the video below of the community outreach meeting of Fulcrum Enterprises last night at the Fairfield Inn in Great Barrington:


As originally proposed, the facility would be sited on 5.78 acres in an industrial area that is also zoned for industry. There were to be 80,000 square feet of fully enclosed greenhouses for cannabis cultivation along with an earth-tone metal building of some 5,000 square feet square feet that will house a manufacturing facility, which, in turn, will contain the facilities to produce cannabis extracts and oils.

But at last night’s meeting, Fulcrum officials, including attorney Kate McCormick, disseminated information indicating that the project had been scaled back. The total square footage of the grow facility, which includes the greenhouse was reduced to 58,500 square feet. Click here to view the 12-point “essential information sheet” McCormick handed out.

The lot, mostly on the former Nolan gravel mine at 22 Van Deusenville Road, will be home to 13 plastic-covered greenhouses and a 5,000-square-foot metal building housing a self-contained laboratory of a little more than 400 square feet.

The property, located about a mile and a half south of the center of the Housatonic section of town, is zoned industrial. Normally, Great Barrington’s zoning code allows agriculture uses on industrial lots by-right. But the town has a special bylaw (Section 7.18 of the zoning bylaws) requiring a special permit from the selectboard for the cultivation of marijuana. So the town, through its elected representatives, has the final say on whether Fulcrum comes to town.

Fulcrum has already held two community impact meetings, including one in May. Because of the timing and a delay in filings with the town and state, a third meeting was held last night.

A few attendees questioned Fulcrum’s motive in scheduling the meeting between Christmas and New Year’s Day and in insisting on holding the meeting yesterday during a winter storm that included sleet and freezing rain, which made for dangerous conditions for those who were brave enough to make the trip.

Most of the residents’ concerns were focused on odor, noise and impact on property values. Heck said Fulcrum reduced the size of the proposed grow operation “to address concerns raised in the process,” most notably noise. As required, Fulcrum hired consultants to review the noise impacts on the neighborhood. He said the project’s noise impacts would be acceptable within limits but was “close enough that we decided to reconfigure the positioning of the greenhouses.” The greenhouses will now run west to east and exhaust fans will blow to the east away from residential homes on Van Deusenville Road.

At Fulcrum’s expense, the town has also hired consultants to investigate sound and odors impacts — or what Fulcrum officials have called “peer review” studies. Just before publication of this article, town manager Mark Pruhenski released the odor study and posted it on the town website. The study on sound impacts “will be posted publicly as soon as it’s available,” Pruhenski said in a news release accompanying the odor study.

Among other things, the odor report by Odor Science & Engineering, Inc. found that “potentially significant odor impacts are predicted in the area surrounding the proposed Great Barrington facility area under the most unfavorable meteorological conditions.” The report also concluded that, “even if the facility’s operating staff were made aware of a potential odor occurrence, their ability to mitigate it would be limited.”

Division Street resident Michelle Loubert suggested the Fulcrum principals did not perform due diligence in seeking a property for their project because there are similar and less expensive lots available in Lee. But Heck said there are a variety of factors involved in selecting a site, including access to water and sufficient electrical power, both of which the 22 Van Deusenville Road offers in abundance.

Loubert, along with and Trevor and Denise Forbes, have hired Pittsfield attorney Mitchell Greenwald to represent them. They recently made a broadly worded public document request to town clerk Jennifer Messina regarding communications between town officials and Fulcrum. Loubert has released the documents to the news media. Click here to see the documents, which number more than 250 pages.

Others went so far as to question Fulcrum’s business model. The Forbeses, who own a small inn on North Plain Road, noted that wholesale cannabis prices are dropping and he wondered how Fulcrum intended to make money while scaling back its proposal.

“No one goes into a business to lose money,” Heck replied. “We feel comfortable that we will get a return.”

Others, including associate Planning Board member Garfield Reed, cited a comment Heck had made at a previous meeting to the effect that Fulcrum did not wish to locate itself in a community that did not want it.

“We understood [recreational] marijuana was approved by a pretty hefty margin,” Heck replied. “We thought we were coming into a town that had already considered and voted and decided on the receptivity to marijuana.”

But Loubert said many in Great Barrington have had a change of heart since recreational marijuana was approved by statewide ballot initiative in 2016.

“If I knew way back when I voted yes that I would lose the enjoyment of my property, then I wouldn’t have done that,” Loubert said.

But it was the words of Cardinale Montano of Housatonic that seemed to resonate.

“This is the community that you are imposing yourself on,” she said, gesturing toward those in the room. “All you have to do is walk down Van Deusenville Road to see that people live there.”

“My question to you is why are you so hellbent on being in that spot?” Montano asked. “There’re cheaper places. Obviously, it comes down to one thing and that is greed.”

At the outset, McCormick said Fulcrum has appeared before numerous town boards and commissions for endorsements and approvals, including an endorsement and site plan review from the planning board.

The Board of Health declined to recommend the project for approval by the selectboard. McCormick told the board that, according to town bylaws, the health board has very few jurisdictional issues of concern. So Fulcrum did not require any approvals from local health officials until such time as a well or septic system was built.

The public hearing before the selectboard for Fulcrum’s special permit application began with a rowdy session in September and has been continued several times because of delays in obtaining consultant reports. It is scheduled to begin again on Monday, Jan. 13, at 5:30 p.m. at the Monument Valley Regional Middle School.