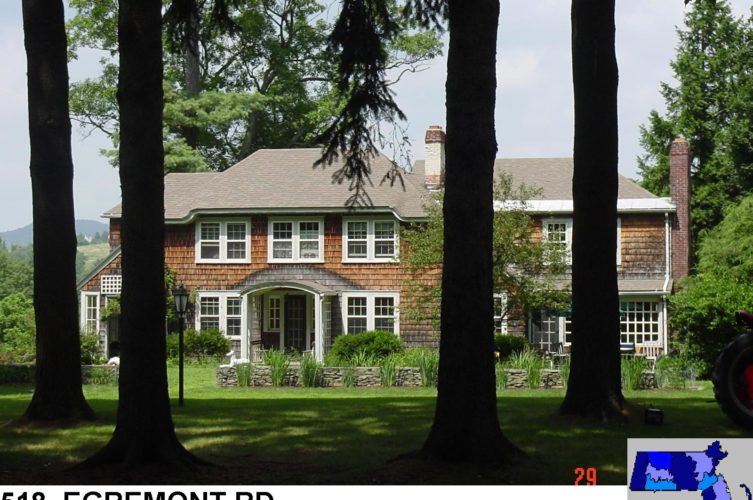 A home belonging to Moses Clark LLC and managed by Andrew B. McMaster sits on 16 acres on Egremont Road. The Great Barrington Conservation Commission has taken enforcement action against McMaster for the second time since 2010. Image courtesy Great Barrington Assessors Office

Great Barrington — The question of what property owners can do with their own land is typically left up to planning and zoning boards, and ultimately voters at town meetings. In Great Barrington, enforcement is left to town zoning enforcement officer Edwin May, who also doubles as the building inspector.

But when property owners disturb wetlands and watercourses, the state and its agents get involved. Such is the case with the owner of 518 Egremont Road who, the town alleges, altered water flows by using an excavator in a flood plain, and on property and buffer zones bordering vegetated wetlands.

When illegal activity occurs in a wetland, the Great Barrington Conservation Commission gets involved. The commission and others like it in Massachusetts are charged with enforcing the state Wetlands Protection Act, which, in most cases, prohibits the “removal, fill, dredging or altering of land bordering waters.”

“We got word that some work was going on in a known wetlands area where we had had enforcement activity before by the same property owner,” said town conservation agent Shepley “Shep” Evans, who updated the commission at its June 3 virtual meeting.

The property is owned by Moses Clark LLC, whose manager is listed as Andrew B. McMaster, according to the office of Secretary of the Commonwealth Bill Galvin. According to Evans, McMaster was found to have violated the Wetlands Protection Act seven or eight years ago and was cited and fined by the commission at that time. The Edge’s attempts to reach McMaster were unsuccessful.

After receiving a tip last month, Evans visited the property, which includes a long driveway and more than 16 acres, according to town records. Also included on the property is a single-family home of some 7,400 square feet.

The property, which is assessed at slightly more than $1.7 million, is on the north side of Route 23 and is located near the Green River. During his visit, Evans saw evidence of activities that violate the Wetlands Protection Act.

Evans wrote an enforcement order dated May 11, 2020, informing McMaster that he had violated not only the state Wetlands Protection Act but the town Wetlands Protection Bylaw as well. He later amended the order to note that the violations occurred in the habitats of rare wildlife and species, which falls under the jurisdiction of Mass Natural Heritage and state Division of Fisheries and Wildlife. To read the amended order, click here.

Evans ordered McMaster to “cease and desist” from any activity affecting the buffer zone and/or resource areas. In addition, McMaster must hire a licensed wetlands professional who will prepare and implement a restoration plan acceptable to the commission and to the applicable state agencies.

Then there is the question of the fine. The town bylaw says violators “may [emphasis added] be punished by a fine of not more than $300 per each offense,” though there was some question among the commissioners as to when the fine should take effect and for how long.

The bylaw states that “each day” the violation “remains in place” constitutes “a separate offense,” and “each provision of the bylaw, regulations, permits, or administrative orders violated shall constitute a separate offense.” That could add up to a lot of money depending on how long it takes McMaster to hire a wetlands specialist and come up with an approved restoration plan.

“The fine is $300 per day is the maximum, so my question is what should the fine be,” said commission chairman Jeffrey N. Cohen. “I think there are multiple choices but … this is a person who has been fined before or who has violated the Wetlands Protection Act before on this same property.”

Evans said McMaster has paid five days worth of fines and has indicated he is hiring wetlands specialist Emily Stockman of Adams to prepare a restoration plan. However, they had difficulty connecting until recently because Stockman was involved in several other projects.

“I have spoken with Emily since and they are actively in the process of memorializing their working relationship and she’s going to be laying out the work plan for generating the restoration plan,” Evans told the commission.

“If he’s started the process, if he’s hired Emily, I think that’s good faith,” added commissioner Lisa Bozzuto. “I don’t think we have to keep the fine until it’s restored.”

“If you started the fine and it lasted five days and on that day you got a response from the property owner saying, ‘I am going to start the process of complying with the enforcement order,’ I think that’s a reasonable amount of time at the moment,” commissioner Andrew Mankin opined. “If things do not move according to timetable, then we can look at fining him again until there is action.”

Evans said he was confident that things will move forward in a satisfactory manner. Stockman was involved in the last enforcement matter pertaining to McMaster and the commission was satisfied with the work that she performed at that time.

“What bothers me personally is that he knew he was violating the law,” Cohen said. “It’s not his first offense.”

Mankin made a motion, which passed unanimously, that the $300-per-day fine be imposed from the date of the commission’s awareness of the violation to the date of the hiring of an acceptable wetland scientist. Evans told the Edge that as of Monday, he had not received formal notice that McMaster had officially hired Stockman.

Asked by Mankin what McMaster was attempting to accomplish with his actions, Evans replied, “He was reorganizing the way the water was flowing on the property with a certain esthetic eye about what would look better.”

The last time in recent memory the conservation commission tangled with a property owner over the extensive removal of vegetation was in 2014 when Ed May issued cease-and-desist order to Lynn Hutchinson, who admitted to trespassing and clear-cutting trees on a Long Pond Road property within 100 feet of a reservoir.

Hutchinson, who is married to real estate speculator Brian Schwab, has been served with three separate cease and desist orders since purchasing the 35-acre property in July 2013 for $700,000, and commencing to cut a large swath of trees all the way to the Pond ostensibly to clear a view.