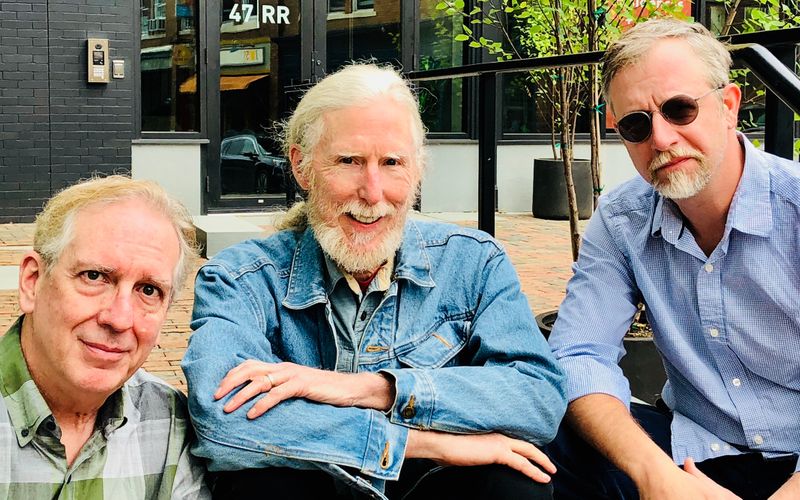 The older I get, the hazier my memories of my grandparents and my father become. I’ve inherited faded photos, and stories muddled over the years. I’m pretty sure half of our family came from Lithuania, the other half from Germany. But the names of the towns are lost.

I try to piece the stories together, but our family is scattered by now. Relatives I’ve never met connect with me on Facebook somehow. I’ve learned that my maternal great-grandfather delivered pumpernickel on a horse and carriage in Philadelphia, that my father’s great-uncles had a haberdashery outside the city with our name writ large on the storefront …

But with so many of the characters missing or seemingly foreign to me despite distant familial connections, much of it doesn’t really add up to a coherent story of where I come from. What I crave is the opportunity to reach through the impossible, to ask my grandparents, great-grandparents — my father — endless questions of who they were, what they believed, what they felt, where they came from. What was their immigrant experience like? What about their old world and new still reverberate in my experience? After all, it is about me. And you. And you …

All of us want to understand ourselves better, where we come from and where we are going. What was my father thinking when he was my age, shortly before he passed? What would he want me to know? What stories would he have told me about himself, stories unvarnished by the interpretations or judgments of others across the passage of time? Stories told by him directly to me and my descendants? I’d give just about anything to know.

Which is why I was particularly moved to learn about a new endeavor by three local videographer-documentarians to capture the stories of our loved ones before it’s too late.

They call themselves Imprint Films, and their passion is to create broadcast-quality — yes, broadcast quality — first-person documentaries of up to an hour in length. “We’ve found that’s the amount of time needed to really let someone tell their story,” said Michael Johnson, one of the three founders. Depending on what a customer purchases, that hour can include a large amount of archival material such as family photos, videos and even period music; and multimedia of the era such as vintage stock footage of the New York subway system in the 1930s and turn-of-the-century Europe; and music of the era such as early jazz — touches that help the stories really come alive.

“There’s an art to telling a story, making it cohesive, helping a person convey what they really want to convey,” said Mark Farrell, Johnson’s partner. “It’s not just about hearing someone’s stories. It’s about building a lasting imprint, a narrative of that person as they wish to be remembered. It’s about recording those ‘aha!’ moments, those flashes of recognition for younger family members to better understand who they themselves are, why they do what they do, the spark that started it all, and how it passes down through the generations.”

For those of you who haven’t been behind of the scenes of such endeavors, suffice it to say that an hour of broadcast-quality video can occupy many weeks of time for an interviewer, videographer, archivist and post-production editor, which is something that Farrell knows well. He’s made a dozen celebrity biographies for A&E, chronicling the likes of Bruce Springsteen and Jennifer Anniston. And believe it or not, earlier in his career, he was a young tech on the set of the Frost-Nixon interviews.

While he’s proud of his celebrity biographies, Farrell said he has a distinct preference for telling real people’s stories, stories that matter on a deeper level to the people who watch them. “The idea came to me after my dad died,” he said. “And I really wish I had thought of it earlier, in time.”

It was at around that same time that Johnson approached Farrell with a similar idea. Johnson — who has led a peripatetic life as a teen counselor, peace activist, life coach and documentarian, among other things — said he has always been fascinated by the idea of capturing the stories that elders have to tell. “When I hear the wisdom they have to share, and their stories of resilience, it gives me strength,” Johnson said. “To act on it while our elders are still lucid and healthy, that’s very rewarding work.”

Rounding out the team is Nick Keene, an accomplished video editor who helped produce a 10-part series on end of life for the National Board of Chaplains, among other large-scale professional projects. All three men live in South County.

Imprint Films has already produced several biographical films, including of the parents of Dr. Mark Hyman, the nationally recognized wellness physician. Clips of his parents’ videos are posted on the company’s website. One learns that Hyman’s mother, Ruth, was raised by deaf parents and made communication among her life’s works. His father, Saul, describes growing up in Brooklyn in a very different era, and about how much family means to him. Imprint Films even filmed him enjoying his favorite hobby: flying.

Ruth’s and Saul’s stories seemingly come alive with archival photos and family videos, newspaper clippings, immigration papers, music from the eras they are talking about and through a lively interviewing process. The production values are so high that it feels like you’re watching their stories on broadcast television.

Three weeks after Imprint Films finished recording and editing Ruth’s story, she passed. But she had the opportunity to share her story for future generations, and it was played at her memorial service. “It was really something to see, Ruth talking at her own service,” Farrell says. “It was so powerful, like she was there. And it made me proud. I know I’m doing something worthwhile that people are going to cherish.”

Dr. Hyman’s father, Saul, passed away this summer. “Mark’s parents’ life stories are now captured,” Johnson says. “For future generations. Not just here and now. Think three or four generations down the road and how they’ll hear where they come from.”