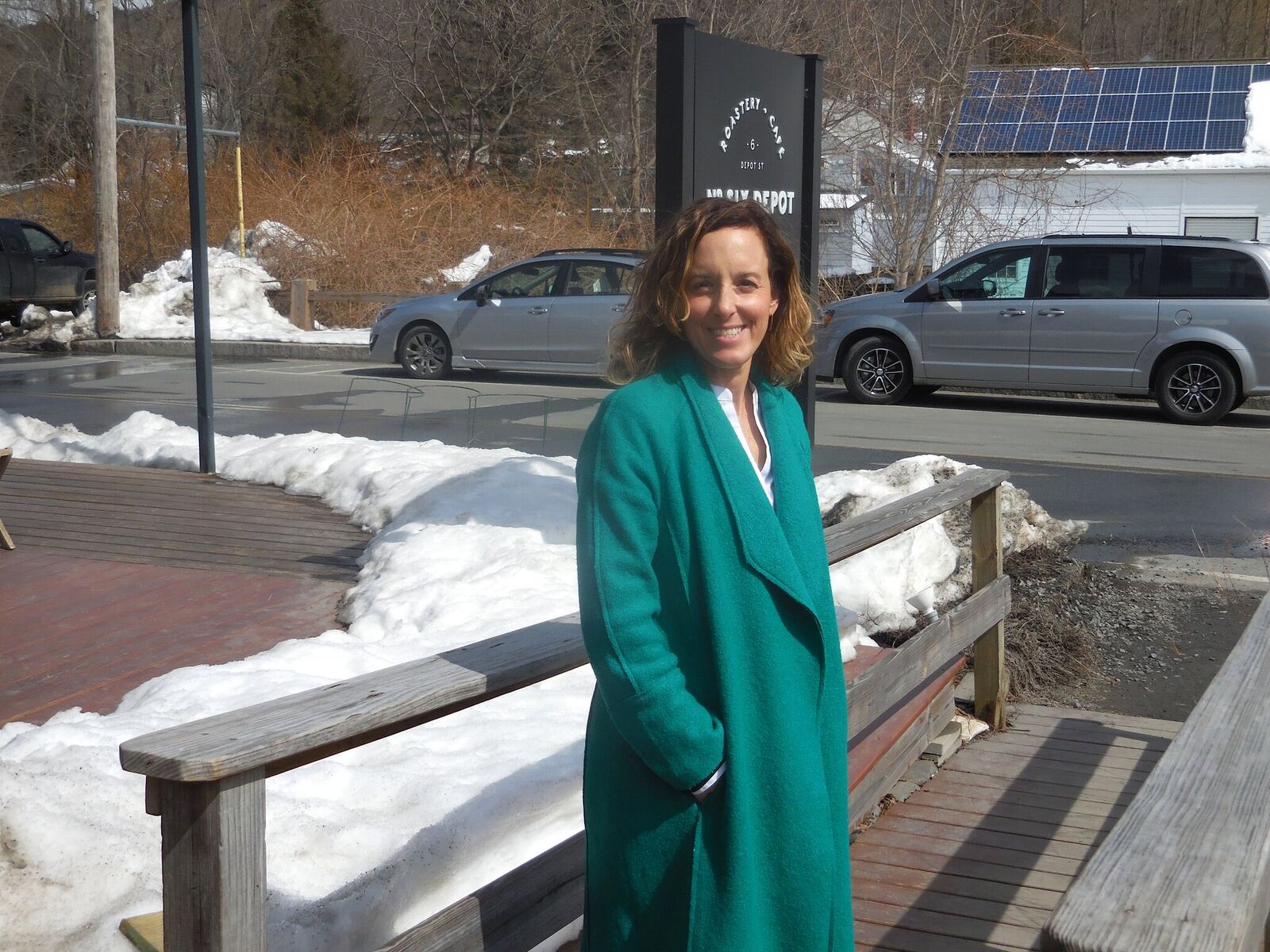 Editor’s note: This story has been revised to include late-breaking information about Judith Knight’s candidacy for DA.

West Stockbridge — As Andrea Harrington sees it, times have changed. But somehow change for the better has eluded the office of the Berkshire County District Attorney.

Time was, she said, “fear motivated voters toward a tough-on-crime, lock-em-up approach, but we’re a lot more educated now. We’re grappling with the opioid crisis. People have a more nuanced view of how we combat these problems.”

Seeing no evolution in the county’s approach to criminal justice, Harrington, a 43-year-old lawyer from Richmond, has decided to run for Berkshire County DA. Harrington, a Democrat, readily acknowledges that she lacks experience as a prosecutor but sees her strength as having a holistic view of the law.

As Harrington sees it, trying cases against defendants is not the only relevant experience that qualifies one to be a prosecutor. Her extensive experience as a defense attorney, for example, has given her a clear-eyed and detached view of the criminal justice system.

Longtime DA David Capeless shocked just about everyone when he announced his premature retirement March 1, a full 10 months before his term was set to expire. Capeless then recommended to Gov. Charlie Baker that Berkshire First Assistant District Attorney Paul Caccaviello, Capeless’ chief deputy, be appointed to fill out the remainder of his unexpired term.

Baker complied and Democrat Caccaviello has announced his intention to run for election in November. Capeless then made a statement that rankled the feathers of many observers, including Harrington.

“I am taking this step now because I want Paul to be able to run as the district attorney,” Capeless said at a news conference announcing the arrangement. With a smiling Caccaviello at his side, Capeless praised his handpicked successor, calling him a “fully qualified, fully experienced” placeholder who will do a “terrific job.”

As Harrington sees it, Caccaviello would just be more of the same. Capeless has been an advocate for a strict approach to law enforcement, even for relatively small drug crimes. Residents of Capeless’ current hometown of West Stockbridge, for example, got an earful in October when he warned ominously about about the perils of the legalization of recreational marijuana.

Capeless was elected DA in a special election in November 2004 and was re-elected to full, four-year terms in 2006, 2010 and 2014. The only year he faced a serious challenge was in 2006, when Great Barrington attorney Judith Knight ran against him.

Knight represented a teenager, Kyle Sawin, who was one of 19 people accused of selling drugs in the parking lot behind Carr Hardware. Because of the location’s proximity to a church that had programs for children, the teen faced harsher penalties if convicted.

Sawin’s first trial ended in a hung jury, so Capeless tried him again and Sawin was acquitted. Knight accused Capeless of having an “obsession with getting one of the kids,” while letting a time-sensitive rape case sit on the back burner – charges Capeless denied.

In an email received after this story was initially published, Knight confirmed that she is running in the Democratic primary for DA.

“I am planning on running for DA and am currently collecting signatures,” Knight said. “Once I have secured 1,000-plus signatures I need to get on the ballot (the deadline is May 1) I will officially announce.”

“It creates an unfair advantage for the person if he is more or less crowned by the sitting DA,” said Rahsaan Hall, a spokesman for the American Civil Liberties Union of Massachusetts, told Commonwealth magazine. “Democracy works better when the public is more engaged in the decision-making processes and knows how those processes are taking place.”

Hall is the head of the state ACLU’s racial justice program and is the campaign manager for the What a Difference a DA Makes, which touts itself as a “first-of-its-kind public education campaign” that “seeks to highlight the key role that the Commonwealth’s district attorneys play in determining the effectiveness and fairness of the criminal legal system.” In our interview, Harrington praised the work of that program.

At the other end of the state, the Boston Globe even weighed in with an editorial. Calling Capeless’ admission “remarkable for its baldness,” the paper said, “Capeless didn’t seem to realize, or to care, that he was short circuiting the democratic process — giving his hand-picked replacement a distinct advantage in the upcoming race, and possibly discouraging other candidates from running.”

On the subject of what Berkshire County voters should do now, the Globe thundered that they should not have a “heedless approach to democracy,” as Capeless presumably did: “They should demand a contested election — and with it, a robust debate over the criminal justice reform proposals swirling around our national and local politics.”

Harrington said, as much as she thinks the approach of Capeless and Caccaviello to criminal justice has to change, she is proud that Berkshire County now – over Capeless’ objections – has for more than a year held so-called “drug courts,” which are speciality courts whose judges avoid traditional sentencing and, as the state says, “typically impose a strenuous regimen of treatment and accountability, and require a strong personal commitment from defendants to take control of their life situations and eliminate drug use.”

One attorney in Berkshire County, municipal and civil litigation specialist Richard Dohoney, has been a strong proponent of drug courts. Dohoney, a Great Barrington resident and a member of the executive committee of the Berkshire County Bar Association, penned a guest column for The Edge two years ago arguing for the need for a county drug court.

Dohoney’s late father James P. Dohoney was a district and superior court judge in Berkshire County for decades. The Southern Berkshire District Court building in Great Barrington is named in his memory.

The younger Dohoney’s name has also been mentioned as a possible candidate to challenge Caccaviello. But Dohoney said he is not interested in throwing his hat into the ring.

“I am not running for district attorney and I am supporting Andrea Harrington,” Dohoney told The Edge.

Harrington grew up in Pittsfield and in Richmond, where she and her husband Tim Walsh, who owns the West Stockbridge Public Market, live with their two children. Her mother Susan gave birth to her when she was 19. Her father William was a carpenter. She had one older brother and graduated from Taconic High School in Pittsfield.

“My parents worked really hard so that we could have more opportunity,” said Harrington. “I was the first person in my family to graduate from college.”

College for her was the University of Washington in Seattle. She went on to law school at American University in the other Washington – D.C. Before moving back to the Berkshires, she spent three years practicing law in Florida, representing defendants on death row.

When she and Walsh moved back to Berkshire County, Harrington took the bar exam (Florida had no reciprocity with Massachusetts) with her 8-month-old son in tow.

Since then she has practiced divorce and family law, handled criminal appeals, represented clients in juvenile court, defended clients during district court jury trials and handled appeals in the state Supreme Judicial Court. She’s currently at Connor & Morneau in Springfield.

There are so many things that Harrington would like to change in the DA’s office that she scarcely had time to enumerate them in her Edge interview. She thinks it’s a travesty that Massachusetts spends more on corrections than it does on education, despite that fact that the state’s incarceration rate is declining.

But she is a big fan of the criminal justice reform act passed in the state Senate and championed by Sen. Adam Hinds, D-Pittsfield, whom she ran unsuccessfully against two years ago in her only other campaign for public office. Click here to read about the legislation.

Some in the law enforcement community have spoken out against the bill, which was sponsored by former Senate President Stan Rosenberg. Nine of the state’s 11 district attorneys, including Capeless, signed and sent a sharply worded six-page letter to Rosenberg outlining their opposition.

One other DA whom Harrington considers something of a role model is David E. Sullivan, the Northwestern District Attorney for Hampshire and Franklin counties. Like Harrington, Sullivan is a reformer who had no experience as a prosecutor. Nor did he sign the aforementioned letter.

Before becoming DA in 2011, Sullivan was a municipal and trial attorney and later served as a register of probate. Harrington said she likes Sullivan’s approach, which his website says “has embraced a community prosecution model that blends smart and fair prosecutions, crime prevention, law enforcement partnerships and community collaboration to build safer communities.”

“He’s been a very successful DA because he’s brought an innovative approach to public-private partnership,” Harrington said of Sullivan.

But challenging Caccaviello and the old Pittsfield-based Democratic machine will be no mean feat. Harrington figures she will need to raise at least $100,000 to be competitive. When she ran against Hinds and Rinaldo Del Gallo in 2016, she raised less than $50,000 for a Senate district race that included portions of the other three neighboring counties.

And there was the matter of compliance. The state Office of Campaign and Political Finance found that her campaign committed some relatively minor violations, for which Harrington took full responsibility.

Her petition papers are out and in distribution. Harrington will need 1,000 certified signatures by Tuesday, May 1. However, since hundreds are typically disqualified on technicalities, realistically she’ll probably need 1,400.

“That’s a huge task,” she said. “But now is an opportunity for change. To change the status quo in politics, this is how it is: When opportunities arise, we have to seize them.”

The state primary is scheduled for Tuesday, Sept. 4. Aside from Caccaviello, Harrington is the only candidate who has publicly announced. The general election will be held Tuesday, Nov. 6. It’s possible the Democratic nominee will have an opponent in the general election, but there aren’t many Republicans in Berkshire County so it’s safe to say that political observers are not holding their collective breath.