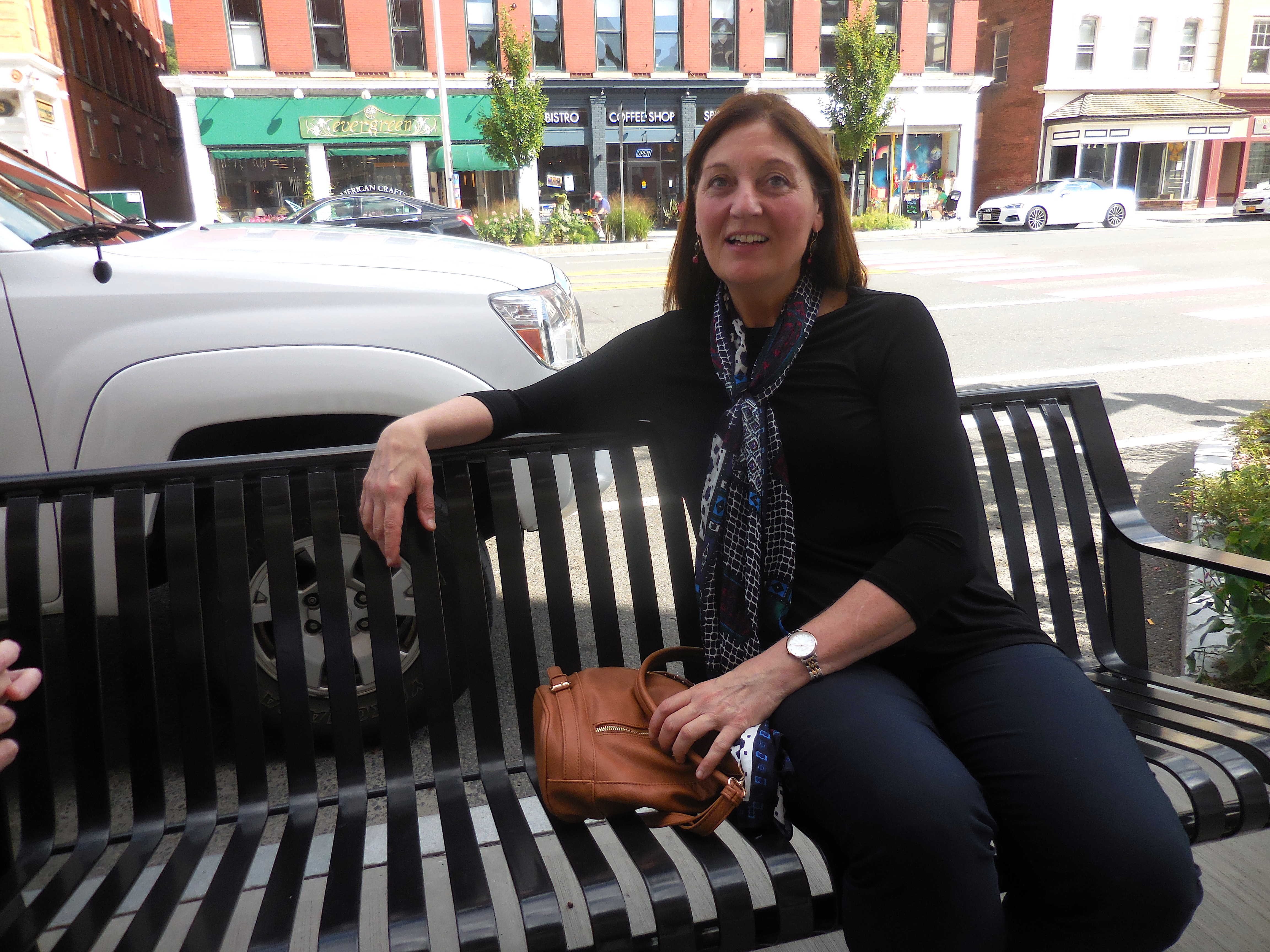 Judith Knight, criminal defense attorney and a progressive social justice advocate, is running for the Democratic nomination for Berkshire County District Attorney. Since there is no Republican running, the winner of the Sept. 4 primary will assume the office. Photo: Terry Cowgill

Great Barrington — As Judy Knight sees it, her life has been a lifelong pursuit of justice. From a childhood of watching her father’s work as a psychiatrist to advocating for victims of domestic violence, Knight has seen it all in her 30 years of legal practice.

Now she is running for district attorney for Berkshire County. Along with two others, Knight is competing in the Democratic primary set for Tuesday, Sept. 4. Since there are no Republicans running for the office, whoever wins the primary is a shoo-in for the post.

“I know how defense lawyers and prosecutors think,” Knight said in a recent interview. “I’ve been on both sides.”

Knight, 57, was born in Stockbridge, where her father, Dr. Robert P. Knight, was the medical director at the Austen Riggs Center. The elder Knight died in 1961 when his daughter was only 5.

Knight likes to recount the story of how, when her father was living in Topeka, Kansas, noted African-American actor and singer Paul Robeson was in town for two nights of performances.

“Robeson had two gigs in two nights but nobody would let him stay in town because he was black,” Knight said. “So my dad got ahold of him and said, ‘Why don’t you stay at my house?’ And that started a McCarthy file on my father.”

Knight added, “Everyone I talked to about my father has told me a story like this. My dad, besides being a pioneer in his field and a rock star in the psychoanalytic field, stood up for people being marginalized. This is what I’ve done for 30 years.” And so Knight made the decision to run for DA for the second time in 12 years.

Longtime DA David Capeless shocked just about everyone when he announced his premature retirement March 1, a full 10 months before his term was set to expire. Capeless then recommended to Gov. Charlie Baker that Berkshire First Assistant District Attorney Paul Caccaviello, Capeless’ chief deputy, be appointed to fill out the remainder of his unexpired term.

Baker complied and Democrat Caccaviello promptly announced his intention to run for election in November. Capeless then made a statement that rankled the feathers of many observers.

“I am taking this step now because I want Paul to be able to run as the district attorney,” Capeless said at a news conference announcing the arrangement. With a smiling Caccaviello at his side, Capeless praised his handpicked successor, calling him a “fully qualified, fully experienced” placeholder who will do a “terrific job.”

According to Commonwealth Magazine, the move was coordinated with Baker’s office. It confirmed what many had thought: that Capeless’ appointment of Caccaviello was designed to give the him the advantage of running to succeed Capeless with the powers of incumbency.

“We’re never going to get real change even if he means well,” Knight said of the affable Caccaviello. “Because once you’ve been practicing in another area, you realize how behind the times we are. I have been saying that all along.”

Caccaviello grew up in Pittsfield, attended the former North Adams State College, went to law school in Springfield and promptly returned to work in the Berkshire DA’s office, where he has been since 1988.

From there, she moved to Colorado, where she served as a public defender for a year. But New England came calling again and she went to eastern Massachusetts, where she eventually landed the job of assistant district attorney for Middlesex County.

Knight prosecuted criminal cases for six years before returning to the Berkshires and a job with the now-defunct Pittsfield firm of Campoli & Curley after partner Thomas J. Curley Jr. left the firm to take a judgeship in Berkshire Superior Court. She also taught law for six years at Western New England School of Law, which also happens to be where Caccaviello earned his law degree.

Capeless was elected DA in a special election in November 2004 and was re-elected to full, four-year terms in 2006, 2010 and 2014. The only year he faced a serious challenge was in 2006, when Knight ran unsuccessfully against him.

In a famous confrontation that year with Capeless, Knight represented a teenager, Kyle Sawin, who was one of 19 people accused of selling drugs in the parking lot behind Carr Hardware in Great Barrington. Because of the location’s proximity to a church that had programs for children, the teen faced harsher penalties if convicted.

Sawin’s first trial ended in a hung jury, so Capeless tried him again and Sawin was acquitted. Knight accused Capeless of having an “obsession with getting one of the kids” while letting a time-sensitive rape case sit on the back burner, charges Capeless denied.

“If I could get in that DA’s office … it’s not going to be about politics at all,” Knight told The Edge. “All these good old boys support Andrea.”

It was a reference to her other opponent in the Sept. 4 primary, former state Senate candidate Andrea Harrington of Richmond. Click here to read an Edge story on Harrington shortly after she announced in March.

In a surprise move on Wednesday, Pittsfield Mayor Linda Tyer endorsed Harrington, who has never worked as a prosecutor and has limited experience in the area of criminal defense.

“If you wanted surgery, you would want the most experienced person for the job,” Knight said. “I don’t understand the attraction to Andrea because I know that she doesn’t have any real interest in criminal justice.”

Knight is thrilled that last year the state legislature passed a criminal justice reform package, championed by, among others, Sen. Adam Hinds, D-Pittsfield, whom Harrington ran against in 2016. Click here to view some of the highlights of the bill.

Some in the law enforcement community spoke out against the bill. Nine of the state’s 11 district attorneys, including Capeless, signed and sent a sharply worded six-page letter to then-Senate President Stan Rosenberg outlining their opposition.

“To truly move Berkshire County forward, we must have a DA who actively embraces the spirit of the Crime Reform Bill and has a broader vision for reducing crime overall,” Knight says on her campaign website. “That’s me.”

Here are some changes Knight wants to make if elected:

“I’ll stay in there to get those things done,” said Knight, who added that she does not aspire to higher office.

Knight is happy that Berkshire County recently — but belatedly, in her view — adopted the use of drug courts, which are specialty courts for drug offenders that the state says save money and reduce crime.

Richard Dohoney, the Pittsfield city attorney and a Harrington supporter, is a prominent proponent of drug courts. Click here to read Dohoney’s letter to the Edge supporting drug courts.

Dohoney briefly considered running for DA himself before endorsing Harrington. Dohoney would have started with high name recognition. The Southern Berkshire District courthouse is named after the late James P. Dohoney, Richard Dohoney’s father. The elder Dohoney was a both a district and superior court judge in Berkshire County from 1980 until his death in 1995.

The DA’s office in Pittsfield has between 50 and 60 employees, including 25 lawyers. That would present a management challenge, but Knight insists she is up to it. For two years after her friend Ann Fitzpatrick Brown fell ill with terminal cancer, Knight managed Blantyre, the boutique luxury resort in Lenox.

For Knight, being elected DA “would be the culmination of my career of 30 years in the law.” It would also allow her to use, in one place, all the skills she has learned over the years, she added.

The primary is Tuesday, Sept. 4. Unlike some states, Massachusetts has a hybrid primary system. Unaffiliated voters are allowed to vote in the primary election. Unaffiliateds may choose which party’s primary ballot they wish to vote on and still remain unaffiliated.