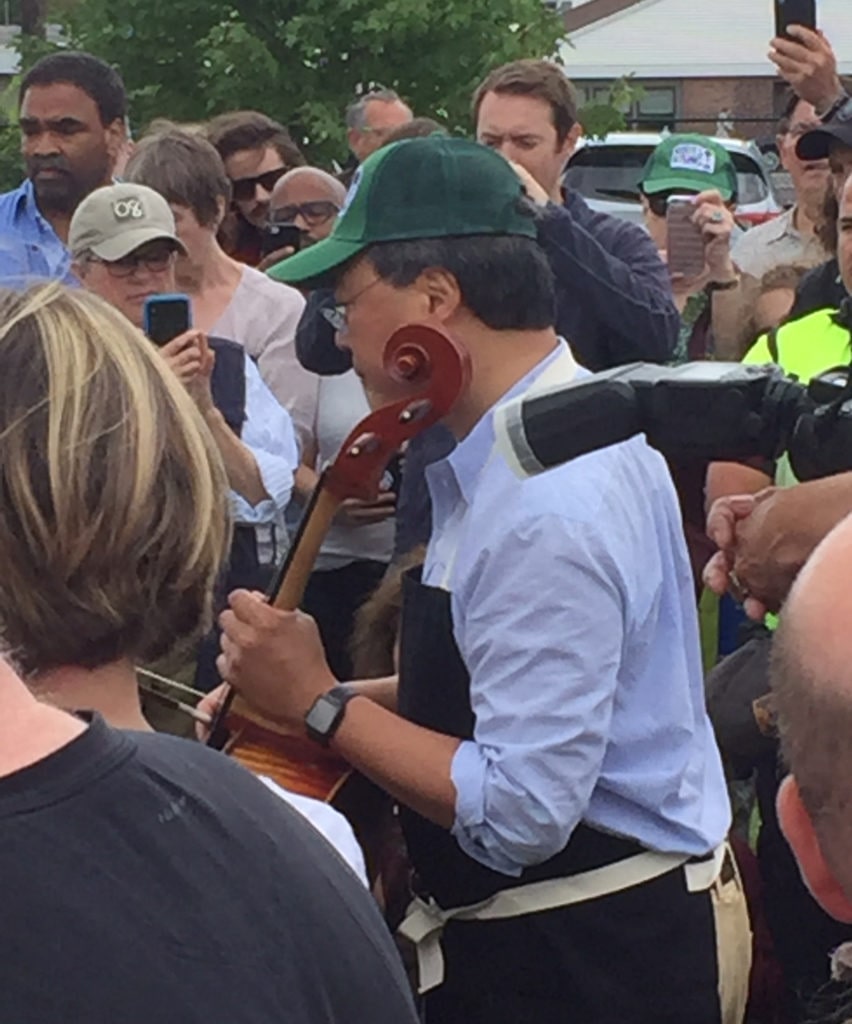 Hannah Van Sickle
Surrounded by participants in his 'Day of Action,' cellist Yo-Yo Ma, in baseball cap and apron, plays for the crowd on the Common in Pittsfield, Mass.

Reflections while participating in Yo-Yo Ma’s Day of Action

Pittsfield — I grew up in Pittsfield. I attended Dawes Elementary school for one year before it was razed to make room for a shopping plaza on the corner of Elm Street and Livingston Avenue; I went on to attend Egremont Elementary, a school to which I could walk (often with my best friend, Beth, whose grandparents’ house I passed on my way); and there was a chain-link fence, in the backyard of my family’s home on Emerson Avenue, that I eventually learned to “hop” when it came time to go to Herberg Middle School. My sister and I spent our free time riding banana-seated bikes around the neighborhood, on occasion being granted permission to go as far as Palmer’s; other times we rode the B-bus to North Street and perused the aisles at J.J. Newberry’s. When I finally graduated from Miss Hall’s School, in 1992, I was more than ready to fly the proverbial coop that was Berkshire County. College took me to Upstate New York, and my first “real” job after graduating was in Cambridge, where I spent two years working in the Office of Yo-Yo Ma. 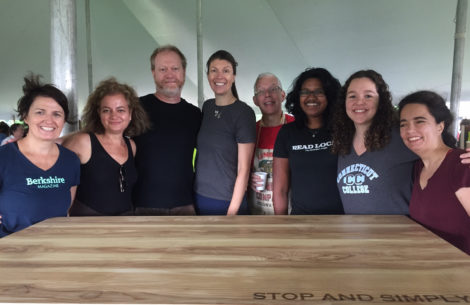 I was invited by my friend and colleague, Anastasia Stanmeyer, to join the Berkshire Magazine team in building a table on the Common as part of Yo-Yo Ma’s Day of Action.

Several people commented on the tables — and why tables? — to which there was not an expressly clear answer. It was a collaboration, a coming together, working together, for a common good. But then, of course, tables create a gathering place where many different people can sit and talk and eat and work and worship and so on and so forth.The tables will be donated to local community organizations.

Ma, who has a home in Tyringham, selected the region as one of 36 locations around the world on his tour, where he performs Johann Sebastian Bach’s six suites for solo cello — a journey motivated not only by his relationship with the music, but also by Bach’s ability to speak to our common humanity and connect us. Alongside each concert, Ma has led a Day of Action, a series of conversations and collaborations to explore how culture can help us imagine and build a better future. As I drove to Pittsfield Saturday morning, I was full of promise at the premise of the day’s activities; when Yo-Yo got up to address the 35 teams of table-making volunteers — remarking that “there’s been no city to have as much community participation as Pittsfield” — I got to reflecting on all there is to learn from participating in projects like this. I quickly turned to putting my ideas on paper (well, kind of). Here’s what I came up with:

TEAMWORK TAKES PRACTICE. I suppose I belong to several “teams,” each of which has a different dynamic. On Saturday, when tasked with joining seven colleagues to build a table, I was reminded of how being a good teammate takes practice. Lots of practice. In short, there is little space for my way of doing things — or your way of doing things — when we are working together. We ultimately have to find a way that works for the task at hand. Being part of a table-making team made me ponder what it means to be a leader and what it means to be a follower. It also made me realize that establishing a common language is key — even when we are all speaking English. If one of the first steps is separating the mortises from the tenons, before taking the edges off — and we do not know what these terms mean — making progress becomes difficult. When applied to everyday life, this realization is key. 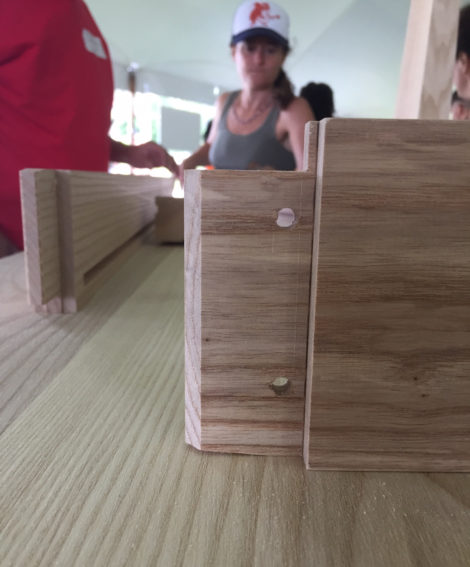 A telon ready for fitting into a table.

LIFE IS A CYCLE. And a circle. I was thinking about this the other day, when I took my 12-year-old daughter and her four friends to see The Lion King at the Triplex. Mufasa, tasked with explaining the circle of life to his son, Simba, says: “Everything you see exists together in a delicate balance. [We eat the antelope and] when we die, our bodies become the grass, and the antelope eat the grass. And so we are all connected in this great Circle of Life.” Then all the animals spontaneously burst into song. On Saturday morning, Yo-Yo Ma — clad in a denim work apron — transitioned from pitching in to build tables and snapping photos with fans to pause and plant a tree. The variety, a Tulip Poplar, was one I had never seen before; Ma’s words, which he delivered while shoveling spades full of earth onto the exposed root ball, were particularly powerful: “This reminds us of the cycle of life,” he said, in a nod to the ash trees that were milled in order for the 35 tables to be made, and the reciprocal gesture of planting a new tree for the sake of posterity.

MUSIC IS A GREAT EQUALIZER. Amidst the din of hammering, singing, laughing, talking–all in the midst of the downtown Pittsfield Farmers’ Market — when Yo-Yo Ma took a seat and picked up his bow, a hushed silence fell over the crowd of hundreds who had gathered. Under a cool grey sky, even if just for a handful of moments, there was silence as everyone paused — regardless of age, race, gender, religion, sexual orientation or ethnicity — to listen to the music of Bach. 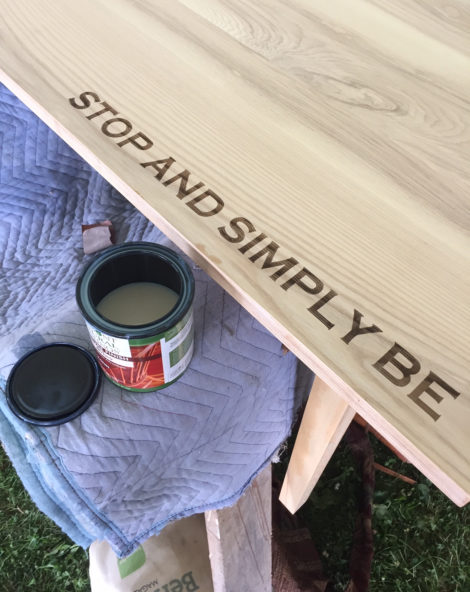 STOP AND SIMPLY BE. This is a tough one for me. I like to move. Fast. And despite knowing the importance of moving well before moving often, it is hard for me to take pause. This saying, stop and simply be, were the words burnished into the lower right-hand corner of the table my team and I assembled. Each of the tables, which were assembled with regionally-harvested wood, was inscribed with a phrases solicited by hundreds of members of the community. Individuals were responding to the prompt “The Berkshires make…”  The responses ranged from all the differenceand room for everybodyto good people betterand wanderers settle down. I’m fairly certain that, considering the 35 tables scattered across the grass on Saturday morning, my table was a message from the universe, reminding me that it’s really important to stop and simply be.

EVERYONE HAS A STORY. I am a storyteller. At times I share my own story, but mostly I share others’ stories. That said, the simple fact that everyone has a story is worthy of a reminder every so often. I was reminded what a privilege it is to share others’ stories when Jenn Smith, from The Berkshire Eagle, called it such in her role as mediator of the discussion at Zion Lutheran Church. I was reminded of this fact as I listened to the young people from Music in Common sing their songs; as I heard the participants from Roots Rising talk about their experiences working on farms; as I listened to talk of the opioid epidemic that continues to rage and take young lives; as it was mentioned, how much easier all the other work of the world would be if everyone had housing. I was reminded when the crowd assembled on the Common, in a call-and-response fashion, joined with Yo-Yo to declare: “The Berkshires make refugees feel welcome…The Berkshires make a place at the table for all.” 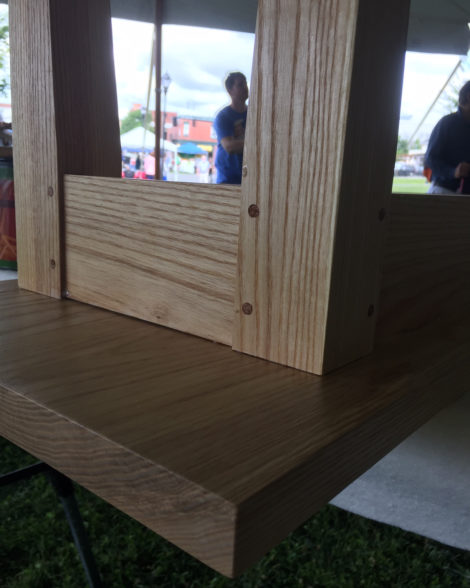 I AM SO FORTUNATE TO LIVE HERE. Berkshire County, to quote Ty Allan Jackson, “really is the place where what you do matters.” I like living in this sort of community, the kind where — despite more than three decades having passed — mothers of my friends from elementary school recognize my face and introduce themselves, just to say hello. This happened to me on Saturday; it was Mary Renz, longtime Pittsfield resident, artist (you know those really cool cows on the wall at Ben and Jerry’s?) and friend of my childhood friend, Sarah, who stopped me just to say hello. “I read your writing,” she said, “and you still look just the same” (although, I assure you, I am much taller). I’m sure this happens in other places besides Berkshire County, but it has not happened to me in any place other than Berkshire County. It also begs a simple albeit profound question, one posed by Yo-Yo Ma during the community meeting at Zion Lutheran Church: “What can we do together that we can’t do alone?”