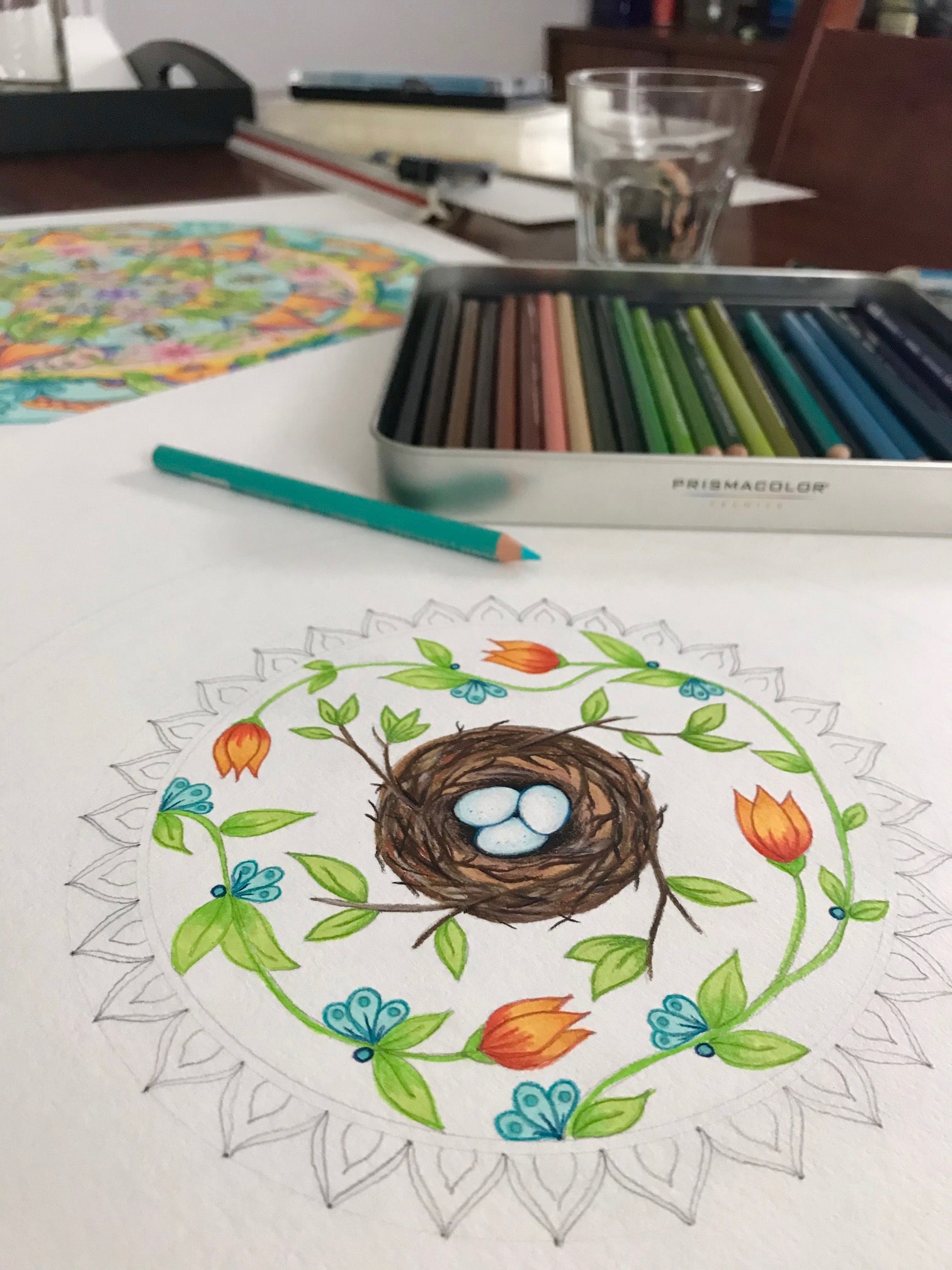 The beginning of March feels like a lifetime ago. Green shoots were making their first appearance among tree roots and clumps of soggy leaves. Slants of sunshine were beginning to break up the sidewalks on cheerful lunchtime strolls. The first Monday of March was the 2nd. We filed our taxes that day, then drove home chatting about how we might use our refund on home improvement projects. It was a good day. The beginning of a new week, a new month, an imminent, energetic and promising springtime to come.

The following morning, I missed an 8AM call from my mother. She rang again just after nine. I had that sinking feeling inspired by any call that arrives in an atypical hour.

He’s gone, she said, her voice soft as a winter thaw. I’m so sorry to ruin your day…

This memory is shaky. The edges are misshapen, like glass shards blunted by the sea, nonsensically refracting light. My world began breaking into pieces from the inside out. Unsure of what to do or where to go, I left the office and drove to my husband’s store, parking at the far end of the lot. I texted: Meet me. I’m outside. Then I watched my husband rush toward me in the rear view mirror. A moment later, his world, too, began to fracture.

In less than 24 hours, on a bright Wednesday morning, I was airbound, flying to Texas. I wrote my brother’s eulogy from 31,000 feet, wiping silent tears and snot on the back of my wrist like a child. The young man sitting next to me wore smart glasses, a stylish watch and leather bracelet. He looked as though he’d stepped from the glossy pages of some hip catalogue. He gave me privacy, but periodically he smiled kindly in my direction, showing white teeth, asking would I like the window shade up or down? I wasn’t wearing any makeup. A series of random details slide in and out of sharp relief.

Two and a half days later, I stood before a small crowd at River Legacy Park in Arlington, leading my brother’s memorial. It was Friday, March 6th, a day both chilly and warm, crisp and sunshiny. The air had that scrubbed feeling characteristic of spring.

One by one, sometimes in pairs, his friends stepped forward, taking my hand, embracing me. They shared stories about him, about the people he’d helped, the funny things he’d done and said, about a mural he’d painted beneath a bridge in Fort Worth. I heard laughter, saw smiles and tears.

Some of my closest friends gathered around me, building an invisible force field of strength to keep me on my feet, and it worked. It wasn’t until I was back in the Berkshires that Sunday that I fell apart, pressing myself against the bedroom floor in heaving rolls of grief, begging the earth to hold me because I was incapable of holding myself.

I went back to work the next day. Monday, March 9th. So much had changed in seven days, and while the coronavirus had been in the news for weeks, everyone still operated business as usual. A friend from the animal shelter stopped by with homemade granola bars. She hugged me in the lobby and shook hands with a colleague.

Two days later the WHO declared COVID-19 a pandemic, and by the end of that week, my world, along with everyone’s, shifted again. That following Tuesday — exactly two weeks after my brother died from an accidental overdose — I began working from home, indefinitely.

When I was in Texas, my cousin asked me, does death feel close?

Part of life is witnessing the moment when death steps from the abstract into reality, when it’s not just something that happens to someone else, but an experience both surreal and so deeply tangible you’re sure the heartbreak will register on an EKG. It takes the shape of a body beneath a blanket, the feeling of a crumpled tissue drying in your heated palm. It smells of lilies and tastes like casseroles. Death has an energetic weight. It takes up space in multiple dimensions, and time glides past, clear water swirling around a stone.

My socially-distant, work-from-home days are both quiet and strained. I wake early and draw while sipping coffee. I shower, listen to the news, and breakfast with my husband, then sit down to spend a long day at my desk, tethered to email, social media channels, and G-chat. I write copy, edit websites, and design documents. I research virtual tours and help curate resources for small businesses. When I remember, I take the dog out, eat a simple lunch late in the afternoon. Later, I practice yoga or go running. I listen to the news again. Throughout the day I worry while working hard not to. Will death take someone else that I love? Sometimes I grieve. Grief is quiet until it is not.

Two days ago I took my first yoga class on Zoom. There were technical difficulties but eventually we were all connected, a tiled screen of disparate bedrooms and home offices, people on invisible mats striving for some sliver of normalcy. It was my first class since my brother died, and I enjoyed it more than I expected. It was easy to follow her voice, to breathe with movement, to mostly forget the world and slip quietly inward for a few precious minutes. Within the small sphere of digital fellowship, we were together, safe and peaceful.

I think about all those tactile points of connection from earlier this month. It’s only been a few short weeks since I was hugged by friends, touched empathetically by colleagues and strangers, but it feels so much longer, time playing her elastic and acrobatic tricks on the mind and body. I was surprised at how much my yoga teacher’s voice bridged this gap, even if only for an hour.

March came to an end and in this short span of time, our lives have shapeshifted. For some, this shift has been dire, colored by job loss, the closing of business, soon-to-be-missed mortgage payments, shut down childcare, illness…the effects of shuttering our local economy have been immediate for so many. Others, like my husband, continue to go to work, their employment deemed essential. I see worry in the lines of his body as he leaves the house each morning, watch his frame sag with exhaustion and relief when he returns in the evenings and scrubs his hands, washes his face. He opens a beer. We’re all getting by, however we can. People laugh through emojis and share memes while calling the bank to ask for extensions and stocking up on toilet paper.

Meanwhile, spring descends. Her evidence is everywhere — little bright spots of green, slips of blue sky, persistent bird song, and crackled ice breaking free to tumble downstream. The air has that familiar scent of growth and renewal. Despite the daylong news cycle, this beauty inspires a feeling of hopefulness, a longing for brighter, warmer days, even while the world shutters around us.

There is a robustness to this season. A spirit of defiance. Because isn’t it amazing how the delicate reproduction of tender green cells can move the weight of earth and stone? This is the resilience that I wish for myself, for my family and friends, for my community. I don’t know what next month brings, or the one after that, but if I am alive to find out, I am so very thankful.

My brother struggled with addiction for most of his life. It’s a losing battle, and the ultimate tragedy is the loss that so often comes years before their body succumbs. I said in my eulogy that in many ways, I lost my brother a long time ago. I saw glimpses of him at times, recognized that boy I knew in the crease of a smile, heard his gentle spirit in the undertones of his voice. My task now is to build up those memories, to recreate him at his best, his most honest and true self. In doing so, I have a lot to forget.

It occurs to me that if death feels close, life feels closer. They are two sides of the same coin, the light holding hands with the shadow. In challenge, there is opportunity. In grief, a chance to seek profound gratitude. In pain, the ability to heal and be made whole, or if not whole, new.

Lately, I’ve been drawing mandalas. I don’t know why and it’s not something I’ve ever done before, but I am compelled. Early in the morning, before the sun rises, when I am debating whether to get up or roll over, I think about the colors waiting for me downstairs, the feeling of pencil on paper, all the patterns in my head asking to be realized. A desire to create.

So I kiss the dog and touch my husband, then slip into house shoes and pad downstairs. I start the coffee, and I sit down and pick up the color that calls to me first. Blue-vert pale. Spring sky. Hope. One of the many shades of cheer.

I begin to draw and it feels a little like coming back to life.

Perhaps, I think, finding joy in times of sorrow is the worthiest act of rebellion.