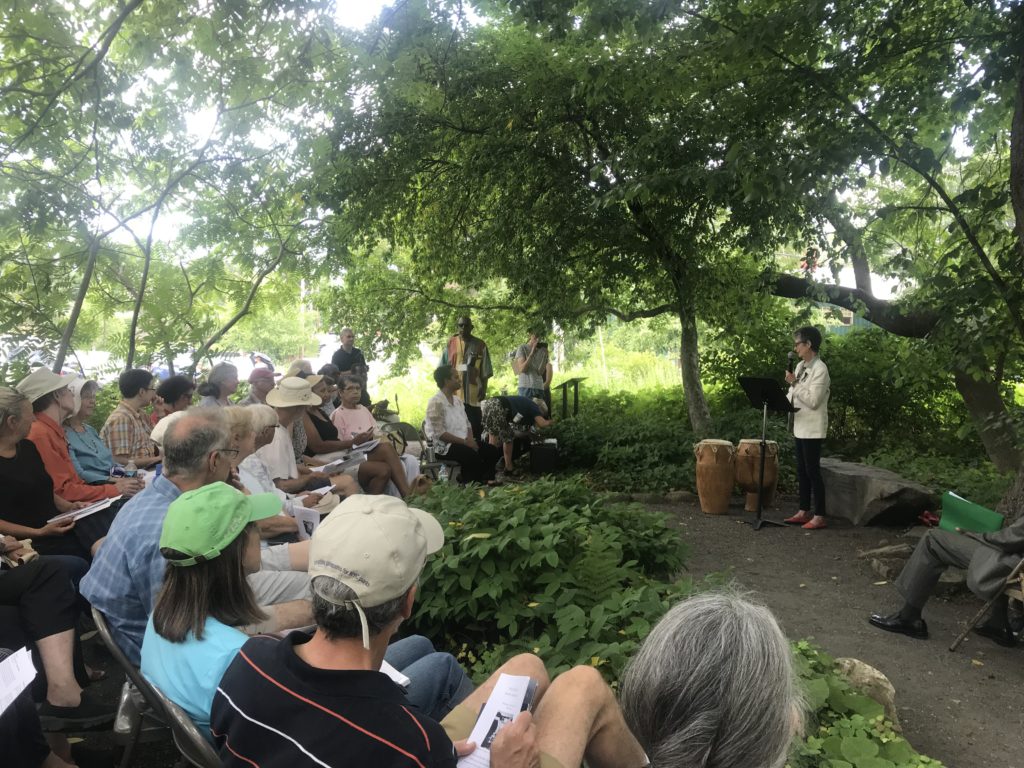 Great Barrington — Greek philosopher Heraclitus once quipped, “One cannot step into the same river twice.” It is a sentiment with both literal and figurative meaning, one that resonates with Rachel Fletcher, the founding director of the Housatonic River Walk. Fletcher has left an indelible mark along the banks of the Housatonic River, a veritable life force coursing through Great Barrington and running parallel to Main Street. She has also chosen this particularly auspicious moment to step away from a project that has captivated the community since its inception three decades ago.

“There’s a kind of symmetry, as River Walk is turning 30 as I’m turning 70,” remarked Fletcher in a recent phone interview. “More importantly, my skills were useful when it was really about growing this trail up out of the ashes, out of the rubble. Now it’s arrived — and has been recognized by the United States Park Service — I am completely confident and secure in stepping away,” she added.

Fletcher found her way to the Berkshires by way of California in 1981. She had decided to spend a sabbatical year away from life as she knew it and, “like everyone else, I ended up staying,” she said of a region that spoke to her in so many ways. She went looking for a tiny little cabin, with no intentions of settling in Great Barrington, and instead found an old farmhouse. “It was a big house, part of the Hebners’ dairy farm, and it was really decrepit. Way more than I was ever expecting to take on, but somehow I just said ‘sure.’” Which, in a rather parallel and serendipitous way, is how she stumbled upon her tenure at the helm of the Housatonic River Walk.

“We started with nothing. It was just a rubble heap,” recalled Fletcher of the little cleanup that began in the backyard of the Community Land Trust offices, adjacent to the former Melvin’s Drug Store. “As more and more people came forward, I had to struggle to keep up with their desire for bringing the river back into the community,” she added. Today, River Walk follows the west bank of the Housatonic River between Cottage and Bridge streets in Great Barrington. The trail’s two sections are linked by Dresser Avenue and River Street. The upstream section extends from the River Walk bulletin board at 195 Main St. to the William Stanley Overlook; this portion of the trail exits at the stairs to the St. Peter’s Church parking lot on Dresser Avenue. The downstream section of the trail begins adjacent to the Berkshire Corporation parking lot on River Street and ends at Bridge Street. “This baby half-mile is so cherished,” said Fletcher, adding, “It’s a project that has drawn people from every quarter of the community.”

Perhaps this is what has most sustained Fletcher in her work over the past three decades. “All that I did was keep the ball in play and enable all these individuals to do their part,” she said, exuding equal parts humility and pride. “All I did is make it possible for these people to do what they wanted to do,” she added, pointing to the construction of a wattle fence, the removal of invasive species, and the creation of numerous nooks and crannies along the river’s edge. When Fletcher looks back on her tenure, she is most proud of the way in which these myriad projects represent the participation of the full community—an estimated 3,100 volunteers in all, spanning the decades. “I’m really most interested in what happens when we as a community, rather than professional planners, come together and we decide what we want our spaces to be and we create them,” Fletcher articulated of the real joint effort that has made River Walk what it is today. In short, “the collaboration of many, many different people [brought about] that trail that is really like no other, [and] is one owned by the community.”

Deep in the throes of retrospection, Fletcher pointed to two moments that stand out in her memory as particularly poignant. The first dates to Aug. 3, 1991, and the flotilla of 50 decorated boats that paraded down the Housatonic River to celebrate the riverbank cleanup. “It was this really preposterous day,” Fletcher recounted. “We had finished cleaning behind Melvin’s … we were kind of proud of ourselves … we had turned the community’s attention to the river … and to celebrate that, instead of a parade on Main Street, we decided to turn the Housatonic River into the parade route,” she relayed. What ensued was a parade of decorated creations running the gamut in both size and complexity, including a basic, black inner tube to a replica Viking ship. “Decorated vessels made their way down the river in the pouring rain and, as it had been a draught the entire summer, people were standing in the river pulling these vessels through,” Fletcher explains. “I cherish that time because, before social media, that’s what community looked like: The perseverance, dedication and suspension of disbelief [that] all of them had is really what it took to make River Walk what it is today.”

Fletcher’s second moment came with the dedication of the W.E.B. Du Bois River Park in September 2002 when, among other dignitaries, Du Bois’ grandson, Dr. David Graham Du Bois, was the first guest to enter the park. “That place, among all the nooks and crannies [along the river], has so much meaning attached to it,” said Fletcher, recalling excerpts from an essay Du Bois included in his address to Searles alumni back in 1930, of which an excerpt reads: “Rescue the Housatonic and clean it as we have never in all the years thought before of cleaning it … restore its ancient beauty; making it the center of a town, of a valley, and perhaps-who knows? of a new measure of civilized life.” (To read the entire Du Bois essay, click here.) Fletcher, in particular, has found great solace in looking at Du Bois’ greater accomplishments through the lens of the ever ebbing and flowing Housatonic River. “When we read [Du Bois’ address], we realized he was guiding us from beyond the grave — directing us all along — to create the River Walk,” she said of the impact Great Barrington’s late “native son” has had on her work.

For Fletcher, it has been a series of small steps, at a pace the community could handle. “Every day, as long as we left the place a little bit better than when we had found it, we felt really good about it,” she said, looking back on the project’s accomplishments. “We took it one day at a time. We never had a master plan. We were always responding to site conditions as we found them. We grew organically as different property owners got on board,” she explained. “We stayed in the moment, responding to what was in front of us that day. And it was always better at the end of the day,” she said.

“For decades, [Rachel] has been my mentor in the importance of natural heritage,” said Rep. William “Smitty” Pignatelli, D-Lenox, speaking to an audience of more than 200 at a celebration at Crissey Farms last week that honored Fletcher. “She shows how effective an individual can be, with her 30 years of passionate stewardship of the environment. She played the significant role in establishing the W.E.B. Du Bois homesite as a national landmark, and established the W.E.B. Du Bois River Park. And in a reflection of her advocacy this year, Gov. Baker approved $400,000 for the Great Barrington Land Conservancy for the W.E.B. Du Bois park and the extension of the River Walk to the Great Barrington fairgrounds,” Pignatelli added. And so a new chapter unfolds.

Christine Ward, who has headed Great Barrington Trails and Greenways, will succeed Fletcher as executive director of the Housatonic River Walk, and Fletcher could not be more thrilled. “What Christine brings, which is just right for this time, is a generous sense of hospitality,” said Fletcher.

“While she will definitely make River Walk her own — and I can’t wait to see what it looks like — she has spent many, many hours learning about the 30 years that went into making the River Walk, [and] that is kind of unusual,” said Fletcher of the propensity for many successors to overlook how an organization got to the present moment. “She has been really diligent about understanding how River Walk came to be, [and] we are so lucky that she is taking over. I am so grateful to her. She’s totally swept me off my feet.” Which, in many ways, Fletcher could say about the very ebbing and flowing of the Housatonic River.