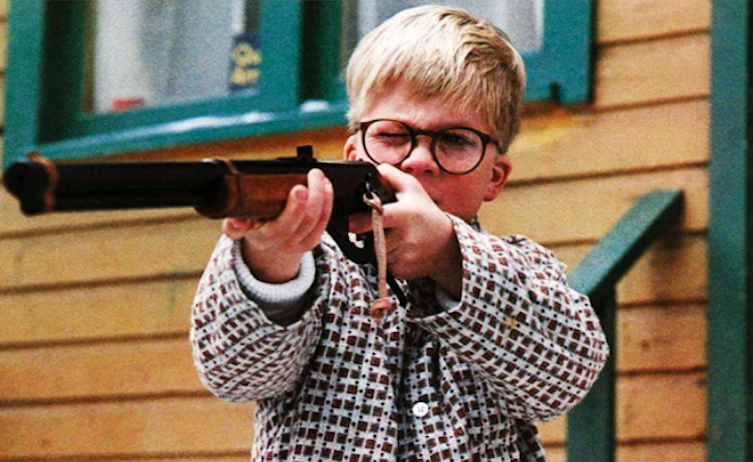 Many of us kids in the Osceola Park neighborhood enjoyed using our BB guns for target practice and even for shooting at each other for fun. The most popular BB gun for us was the Red Ryder Carbine-Action 200 Shot Range Model air rifle.

As youngsters, we played with plastic figurine soldiers or cowboys. My younger brother Chip, my sister Tricia, and I would stand them up in our cellar and shoot them down with the BB gun for sport. Most of the shots either hit the targets and were embedded in the dirt floor. However, some of them bounced off the stone walls and ricocheted, hitting us. Tricia still has a scar on her leg from one such ricochet. You probably remember the warning “You’ll shoot your eye out” from Ralphie’s mother in the movie “A Christmas Story.” Always listen to your mother.

We were allowed much freedom and unsupervised play and really didn’t think about any potential consequences of our actions. As we grew, we tempted fate by playing war games at Osceola Park (after hours) such as having one three-person team act as the BB gun shooters and a similar team act as targets. We wore dungarees, hats, and long sleeve shirts if we came prepared. We were aiming at each other’s backsides and not each other’s eyes of course.

The chosen team would begin running away from us as fast as they could, and once we counted to five, we began firing away with our pump-action guns. Then we would reverse roles.

The striking BBs would sting us a little, but caused no long-term harm. We would hear the panting breaths and a few “oohs” and “ouches” uttered as they hit the runners, but that’s all. This moving target practice improved our aims, but not our judgement, as you shall see.

We graduated to hunting woodchucks and birds with real rifles as we became teenagers. One bright, summer day, Joey Bovington, Dennis Gilliams, and I decided to meet at the park and cross over Route 20 to the woods and fields with real rifles and ammunition in hand. We were about 12 years old and, even though we never had much luck, we enjoyed the outings, nonetheless. No neighbors ever questioned what we were planning.

I “borrowed” my father’s bolt-action 22-caliber WWII rifle and the others had comparable rifles obtained from their parents. None of us had gun licenses, let alone gun safety training. The significance of the progression from BB guns to real rifles had not dawned on us yet. It soon would.

While hunting, we were walking through a hay field — single file, about two feet apart from each other — when a bird flew out of a nearby tree. I was third in line and reacted quickly, almost instinctively, by aiming and firing. Luckily for the bird, I missed, but immediately realized my bullet had missed Dennis’ head by mere inches. He yelled at me for being so careless. This near miss was far worse than what Ralphie’s mother portended.

I quit the hunt on the spot and went home in shock, fully grasping the idea that I was no longer using a harmless weapon anymore. I put that rifle away and haven’t touched it, or any others, since.