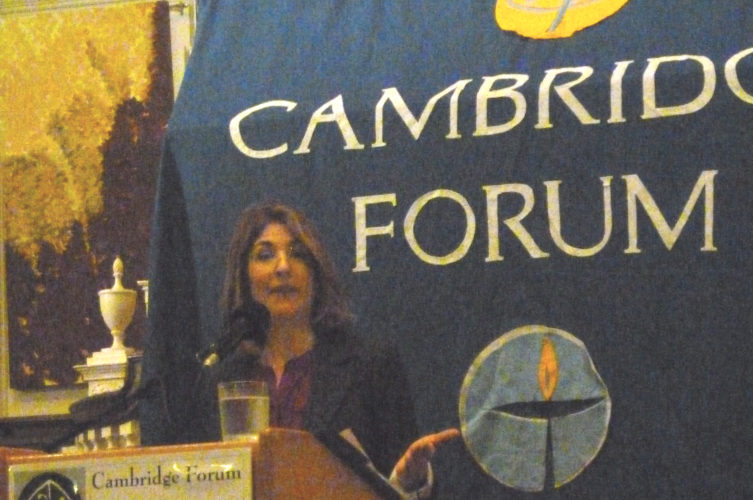 Cambridge, Mass. — Last month’s historic People’s Climate mobilization signaled to world leaders that citizens all over the globe were demanding urgent and bold action to address the unfolding threat of climate change. But will our leaders respond to the people’s plea? There is reason to doubt that they will, and it has everything to do with the current political and economic system that places corporate profit and power above all else.

Because beyond the charts that show global carbon emissions skyrocketing along with the temperature, the really inconvenient truth, according to award-winning journalist and bestselling author Naomi Klein, is that getting this crisis under control requires actions that are fundamentally at odds with the reigning economic ideology.

“There are no non-radical options left on the table when it comes to climate change,” Klein told the audience that packed the pews at the First Parish church in Cambridge Thursday evening (October 16). The author of No Logo: Taking Aim at the Brand Bullies and The Shock Doctrine: The Rise of Disaster Capitalism is currently on tour speaking about her newest, and most provocative, book titled This Changes Everything: Capitalism vs. the Climate.

While there have been many books written about climate change over the years, this one is a potential game changer. In no uncertain terms, Klein makes the point that it’s not so much carbon but rather deregulated capitalism that is at the root of the climate crisis. And it’s a reality we’ve been ignoring, a truth we’ve been unwilling to admit, for far too long.

The perilous predicament we’re in, according to sound climate science, is clear. Maintaining our current trajectory – often referred to as “business as usual” – will lead to catastrophic (4 to 6 degrees Celsius) warming, at which point our physical world becomes unrecognizable. The climate models break down and we will be left in uncharted, and frankly terrifying, territory.

Fortunately, it is still possible to avoid that disastrous and unacceptable fate.

But doing so, Klein argues, will require us to radically and rapidly restructure our economy. Because the underlying truth of the matter, she states in her book, is that “our economic system and our planetary system are now at war.” In other words, she writes, “we are left with a stark choice: allow climate disruption to change everything about our world, or change pretty much everything about our economy to avoid that fate.”

In her book and in her talk Klein explains why we are faced with this cataclysmic contradiction and why applying traditional market approaches to reducing emissions simply won’t cut it (pun intended).

A key element of why we have failed to effectively respond to the climate crisis is what Klein calls “bad timing.” As she points out, the warning bell on climate change was sounded nearly three decades ago in 1988, the year NASA scientist Dr. Jim Hansen famously testified before Congress, and the year TIME Magazine replaced its Man of the Year with “Planet of the Year” featuring Endangered Earth. The Intergovernmental Panel on Climate Change formed that year, and the UN began preparations for the Rio Earth Summit in 1992.

This all coincided with the rise of “neoliberalism” – free market ideology marked by an expansive global economy, deregulated corporate capitalism and austerity policies, and veneration of private profit above all else. The triumph of globalization and free trade overshadowed, and actually weakened, any efforts to respond to the climate crisis.

It’s no coincidence that global emissions have increased by 61 percent during these past few decades when the free market, neoliberal ideology was also at its zenith. As Klein explained, “this ideological project made it inevitable that we would fail to rise to the challenge of climate change in this period.”

As a result, our present reality is not just that we are on the fast track to climate catastrophe. It is also that we now have an economic and political system that isn’t working too well for most people. Particularly in this country, the disparity between the “one percent” and everyone else has become even more apparent and grotesque. The squeezing of the middle class, cuts to social spending, rising costs of education, Citizens United court ruling, the 2008 financial meltdown, these are all manifestations of this dangerous strain of deregulated, “grow or die” capitalism.

Klein contends that climate change, another manifestation of unrestrained, consumer driven capitalism, cannot be addressed through wonky policy measures and mere market solutions. Rather, it requires a response that puts an end to the rise in injustice and inequality that are inevitable elements of our current economic model. Klein emphasizes the need for a “justice based approach,” one that places “economic transformation at the center of our response to climate change.”

And although the individual may feel utterly powerless in challenging the entrenched elite interests who stand to lose trillions in assets, the only shot we have at winning this fight, according to Klein, is to “build a movement made up of masses of people with even more to gain.”

So what are we striving for? If our current economic model is basically incompatible with life on Earth, what alternative model should we seek to replace it with? According to Klein, what we need is something we haven’t yet tried. It includes elements of socialism, but it goes beyond a straightforward socialist system. Localism will be key. We will need to revitalize and build up local economies everywhere. And we can still have profitable businesses and corporations, but they need to be ones that operate under principles of social, ecological and economic justice.

Our transition towards such a system, according to Klein, calls for massive investment in the public sphere. Rather than subsidizing fossil fuels and maintaining corporate tax loopholes, we need to be investing in sectors that would actually benefit most people, from public housing and public transit to renewable energy. At the same time, Klein notes, we need to be divesting from those entrenched energy interests pursuing profits at any and all expense.

Pulling of such transformative change will be without a doubt the greatest challenge we’ve yet faced. And, as Klein urges, we have to start now. Top climate scientists agree that in order to stay within our global “carbon budget” and avoid the 4 to 6 degrees Celsius warming, wealthy industrialized nations must reduce their emissions by 8 to 10 percent each year.

These needed cuts wouldn’t be as drastic had we actually responded to the climate warning set off two and a half decades ago. Our collective procrastination places us at that point where we must now fundamentally restructure our economic model, and Klein adds, fundamentally shift our values away from unfettered consumerism and extraction towards a more benign and regenerative relationship with nature.

The question, then, remains: Can we pull it off? Klein would like to believe we can. As she concluded in her talk and in her book’s introduction, “All I know is that nothing is inevitable. Nothing except that climate change changes everything. And for a very brief time, the nature of that change is still up to us.”