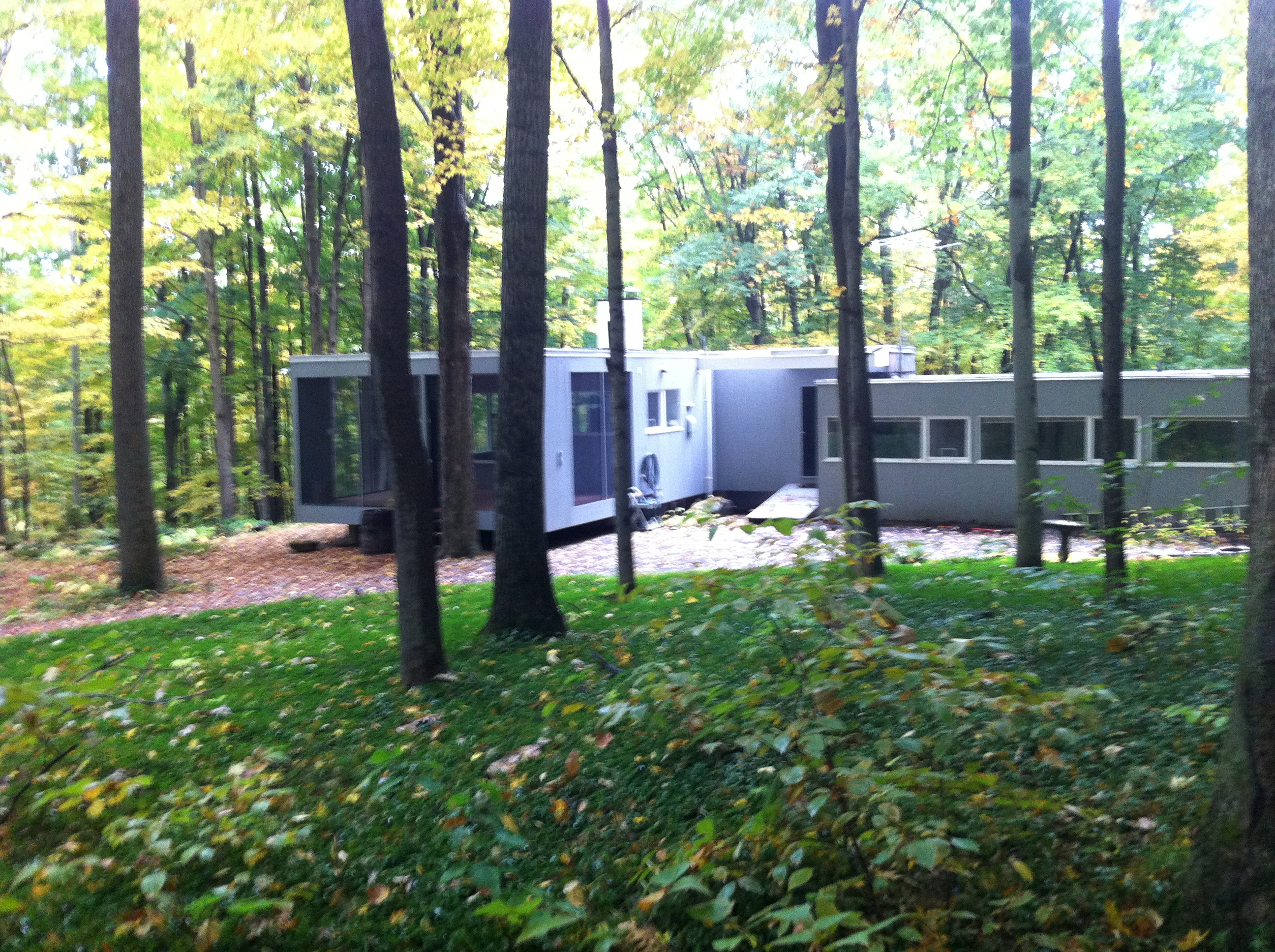 Richmond — “Modern” houses, a k a “Mid-Century Modern” houses, are making themselves a big part of my life these days. I don’t believe in coincidence, but when, recently and in quick succession, I:

I knew something was up.

The first houses I studied in the fall of 1971, as a freshman at Cornell University’s College of Art, Architecture and Planning, were the predecessors of the “Mid-Century Modern” houses — Le Corbusier, in particular, but also Alvar Aalto, Frank Lloyd Wright, Breuer and Walter Gropius. These five were spiritual precursors of the lesser known, but eminently talented, architects like A. Quincy Jones, Whitney R. Smith and Craig Ellwood who were designing in Los Angeles in the late 1940’s.

My own architectural zeitgeist – as is evident from my work here in the Berkshires – is obviously sympathetic with the architectural thinking of all of these guys. That, coupled with the five years I spent as a child living with my family in a classic 1950’s ranch house (the somewhat estranged cousin of the modern movement), and you can see why it was an easy choice to start my writing for The Berkshire Edge with the house renovation in Richmond.

Construction has yet to start so we have only “before” pictures, but this is clearly a “Mid-Century Modern” house. Although it was built sometime between 1955 and 1960, its credentials are impeccable. This largely one-story residence presents a bold, horizontal design, floating gracefully above the deeply sloping site; this is especially evident as you approach from Route 41 along Summit Road. The “strip windows” running along the southern elevation (roughly parallel to Summit Road) further emphasize the horizontality of the design. In general, the house has open plans, creating living space – living, dining and kitchen areas — with as few walls as is practical.

These houses – and this one in particular — were not afraid to cantilever sections of the house above the ground, creating the impression of floating. Finally, like most “Modern” houses, this house has a flat roof. Not all “modern” houses have flat roofs, but most do; if not flat, then a very minimal slope. Why? Primarily because Modernism emerged from the older European “International Style” most commonly associated with the Bauhaus and the work of Walter Gropius; like the “International” style, “Modern” buildings eschewed excess or extraneous areas in any building – such as attics – and wanted the finished building to reflect both its function and structure as “honestly” as possible. Last, but not least, these designers saw the roof as a possible outdoor living area, not simply a way to keep the rain and snow out. I recommend reading “Toward a New Architecture” by Le Corbusier, the seminal treatise of the “International” design movement, profoundly affecting the architecture and furniture — even the art — of the time — a book I spent many hours studying in college.

The great progenitor of Modernism, American architect Louis Sullivan, summed up the ethos of the cutting-edge designers and architects of the time in three words: “form follows function.” That clarity included even the basic layout of the house. We were taught that each building must be organized by “parti”; in simplest form this meant that the house’s plan layout, viewed from above, would resemble a giant letter of the alphabet, most commonly, “H,” “T,” “L,” “O” (like the new Apple headquarters) or even “S” (a bit like Aalto’s Baker House dormitory building at MIT.)

The “parti” of the Jaffee Residence is a “T,” with the primary entry at the intersection of the horizontal and vertical segments of the “T.” The house was not built as it is now all at once: the master bedroom suite was added later (as best I can tell) further emphasizing the “T” “parti.” This addition was added relatively soon after the main house was constructed, and every effort was made to blend the addition with the original house design. In fact, seeing it today, one could easily be forgiven for thinking it was all built at the same time.

But here’s the rub: unlike the houses shown in the book mentioned earlier about the Crestwood Development in Los Angeles (Cory Buckner’s Crestwood Hills / The Chronicle of a Modern Utopia, Angel City Press), this house is located in New England. This is no small matter; often, when reading Dwell, Architecture Magazine or Architectural Record, I sometimes stare wistfully at a lovely assemblage of glass and steel floating gracefully above the landscape only to crash back to earth, realizing it was built in Los Angeles or another relatively winter-free location. Yes, the sun can be brutal, but nothing compares with frost heaves, ice-dams and frozen pipes to challenge a building’s longevity. Maintenance is critical for the well-being of any building, but especially for a “Mid-Century Modern” house in the Berkshires. It doesn’t take many winters (roughly one) without adequate preparation and maintenance to destroy such a house in this climate. Given the challenges this house has faced, it has emerged relatively unscathed. Best of all, the new owner is determined to both keep its identity and restore its luster, functionally and aesthetically.

That’s fortunate: this house is an excellent – and visually bold – example of the “Mid-Century Modern” style. Renovations like this are done for many reasons, but the top three reasons are economic, practical considerations, and love. This renovation combines a bit of all three but “love” played no small role in the owner’s decision to do this work; he fell in love with the house and wanted to bring it into the 21st century. This meant – as you can see from comparing the “now” photographs with the proposed design sketches — that while we are keeping the plan largely unchanged (because it works very well as it is), we are upgrading the electrical / lighting system for both functional and code compliance reasons, adding some insulation, repairing any rotten siding, painting inside and out, and, perhaps most importantly, replacing the roof. While maintaining the “flat roof” appearance, we are adding some slope to the new design to keep water from “ponding,” as it does now, with adequate vertical leaders to drain it effectively. We are also adding some new plumbing fixtures for functional purposes and re-grading the site to make certain rain and snow melt runs away from the house.

The site – the landscaping and hardscaping — is a critical part of the beauty of this house. The owner rightly nixed my effort to loop the driveway directly in front of the original entry because it would compromise the stunning grove of birch trees on the east side of the house. While we both agreed with my decision to make the original entry the main entry again – as opposed to the little stairway off the screen porch – we decided to place visitor parking on the north east side adjacent to the garage, requiring a short, but pleasant, walk to the front entry, thereby creating a real connection between the parking area and the main entry. An elegant entry to an elegant house.

Earlier, I mentioned a dream I had about my time in a house designed by architect Richard Neutra in Hamburg, Germany. I was working in Germany that summer between my first and second years at Cornell. I had a year of architectural design under my belt by then, but frankly, I was lost. I had no idea of what constituted good architecture or how I would go about creating such a thing. My confusion ended the day I arrived at the Neutra house.

Here, for the first time, I experienced a magnificent piece of architecture, a house that functioned beautifully and looked amazing. It was suffused with light, wonderfully open within, and connected gently and thoroughly to the garden outside. Even more amazing, especially after the relentless seriousness of my first year of studies, it was playful! As you moved through the house and garden, delightful surprises were the norm: new vistas opened unexpectedly to a lovely tree in the garden beyond, a sunset blazed through a small window at the end of a hall, rugged stone walls were separated by a single tree from polished marble walls, and hanging vines draped everything outside in a green tracery of leaves. The sun was not bluntly blocked by venetian blinds, but gently corralled by the roof overhangs. It was an awakening for me about what architecture should be. It is not an overstatement to say that I returned to school a different student, one who now “got it.”

Finding this house in Richmond reminds me of that initial excitement.

4 thoughts on “TRANSFORMATIONS: The resurrection of a ‘modern’ house in the Berkshires”