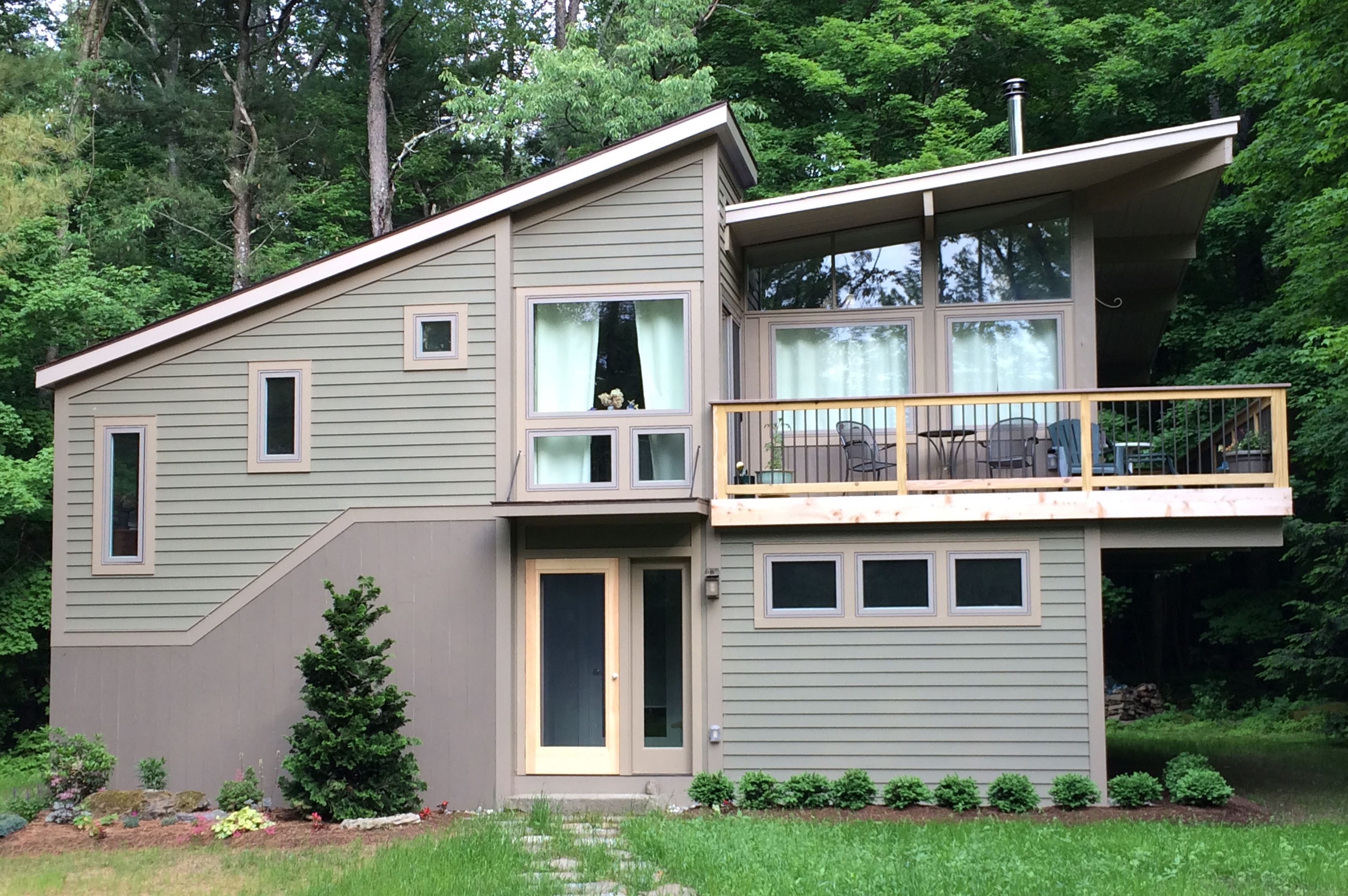 West Stockbridge — Every residential design project is unique. Whether new construction or renovation, there are three interrelated components that govern the project outcome. They are – the client’s program, the design, and, of course, the budget. (Regarding budget, William Randolph Hearst doesn’t come along every day and even less so since 2008). Each of these has an impact on the other and inevitably requires adjustment during the project life.

Mr. and Mrs. S. are folks I’ve known for years. Their house was built in the seventies – a kind of economical deck house with upside down organization – bedrooms below, living dining kitchen above. They wanted to add a bedroom and bathroom. The existing building had two bedrooms, one full bath at the bedroom level and one half-bath at the upper level. Their budget was tight, and they knew it.

Entering a building is a critical event necessary for its success. You do it every time you come home. Every guest experiences this event too. Even in a humble building, the entrance can be gracious, convenient, obvious and orienting. In the case of our project, the entrance was on the back side of the building and the stairway to arrive at the living level was either an exterior stair or an interior spiral stair. Neither was gracious, convenient, or obvious. And they were both a little disorienting. Resolving that was primary.

Since the budget was so tight, we decided to develop a scheme that only minimally disrupted the interior of the existing building. So, our first approach was to develop an addition containing the new bedroom and bath. It included a linear ramp that ascended to the upper level and provided a kind of ceremonial entrance. This new entrance was obvious, gave a sense of orientation and was gracious in that it avoided steps and depended on a gradually inclined path that could be easily maintained in the winter.

Mr. and Mrs. S. embraced the concept and were ecstatic. So we took the next vitally important step — evaluating the cost. We do this as early in the design process as possible and in particular with tightly budgeted projects. We sat down with a contractor, David Babcock of Babcock Brothers Restorations Inc. in Lee, Mass., soon after developing these concept sketches. We also provided an overall description of the project scope. David took some time, considered the process to build and obtained material estimates. Unfortunately, the cost exceeded the budget. Excessive site work was blamed, since the scheme required reorienting the driveway and parking area. A number of moderating adjustments were considered but ultimately this scheme fell by the wayside.

So next step – we generated a new scheme. This one eliminated the long linear entry, avoided reconfiguring the driveway and provided a more direct connection from the existing parking area.

Again, a review by the contractor determined that this, too, was a budget buster. So on to the third scheme. And this required a review of the program. The most effective way to cut budget is to reduce square footage. Therefore, the program was edited; we eliminated the third bedroom and decided instead to expand one bedroom and focus efforts on improving the interior of the bedroom level.

Most importantly, we established a front entrance to the building that related comfortably to the parking area. And though one still needs to climb stairs to arrive at the main living level, the new stairs are designed to be gentle in slope and to provide a comfortable ascension to the living level, inside the building instead of outside.

In summary, the process of meeting project goals first focused on the design. Several early attempts to alter the design and bring the project into budget fell short. The budget was increased somewhat but still did not meet the demands of the design. The only component left to adjust was the program. So, the new bedroom was eliminated. And, as a result, the project size was reduced and the budget constraints met.

And though the original program was not realized and one of the primary components eliminated, the essential needs of the Mr. and Mrs. S. were met. With a logical and inviting entrance, the house functions more graciously. The existing bedrooms have been improved with soundproofing added between their walls. The bathrooms have been redone. The interior and exterior have been transformed with new finishes. Insulation and window upgrades have reduced heat-loss, resulting in a more comfortable interior.

Both husband and wife are writers and spend most of their time alone. Their refinished two-bedroom home works well for them. When they have guests, they are proud of their newly transformed home.