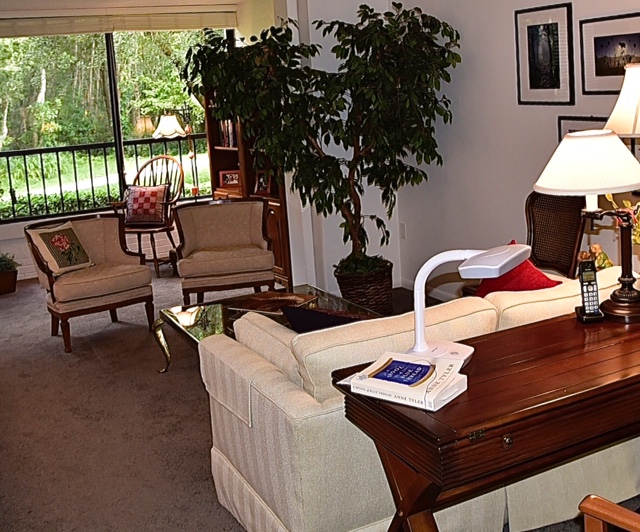 George Carlin wrote that “A house is just a place to keep your stuff while you go out and get more stuff.” Most of us can identify with that; we accumulate treasures and the memories we associate with them. Speaking as a “baby boomer” myself, while people of my generation may feel overwhelmed by our own accumulated treasures, there may also come the time when we must help our aging parents pare down their “stuff.”

Like many of you, I often start my day reading emails from websites that I enjoy and to which I have subscribed. One such “blast” was about a West Coast couple who transformed their 2-car garage, which previously doubled as a storage unit for old bikes and antiques, into a functional living space. The aesthetics are fabulous and their new home is clutter free and inviting. The idea of de-cluttering is an appealing one, most of the time.

For our parents, however, a simpler lifestyle may not be so appealing when it is associated with the transition from their home to a senior residence, a community that offers an independent yet supportive lifestyle. Helping that person transition from a large and well-appointed house to a modest retirement apartment or to a much smaller home has provided me with some of my most rewarding design projects.

The issues are complex: children may be living at great distances; they cannot help as much as they would like. More often than not, the homeowner is a single individual who has lost a long-term partner or spouse. Leaving one’s house can feel like a daunting proposition. It’s not the “stuff” that is difficult to leave behind, but the memories that are attached to those things. Weddings, births, children’s milestones and family vacations; there are souvenirs and keepsakes, not to mention the immense amount of home furnishings that need to be dealt with and dispersed.

Emotionally, the move to a smaller apartment in a retirement or assisted living community conjures thoughts of one’s final resting place, and connotes reduced independence. And leaving the home a person may have shared with a partner, where they may have raised a family, may evoke a great sense of loss. Helping a person to transition into comfortable, familiar and safe surroundings, where they feel at home and proud of their new apartment, is an assignment that is particularly gratifying.

One recent project was for a client named Mrs. M, a woman in her early 80’s, living in the home she and her late husband had occupied for about thirty years. She’d been widowed five years earlier and her children were concerned about her increasingly isolated daily life. Except for occasional trips to the market, to the mall or to the hairdresser, Mrs. M stayed at home. Her excursions to concerts were rare, an activity that she had enjoyed with her late spouse. She declined suggestions to travel, feeling that she would be as lonely on a trip as she was beginning to feel at home. Her children identified a great option in a “full service” assisted living community and I was contacted by them to assist with their Mom’s move.

Together, Mrs. M. and I toured her new community and the apartment she agreed would be her new home. She wanted to take her sofa; I persuaded her take the love-seat instead. Her favorite wing chair was kept and reupholstered, providing her with the comfortable reading nook she had so enjoyed in her former home. The furnishings were largely hers, supplemented with an occasional piece of functional furniture in a style that was to her liking. She chose the decorative accessories and artwork, while I chose arrangements that would not impede the walker she might require in the not-too distant future. And while her apartment had many fewer rooms than her previous home, the new space was divided into functional areas for dining, entertaining, computing, and reading.

The family was as thrilled with the transition as was Mrs. M; and together we came up with a plan for the sale and disposition of some of her furniture.

Attending to the emotional transition experienced by Mrs. M. was as critical as the physical relocation.

The rewards for me were so great that this has become a major focus of my practice. While I continue to work on homes for weekenders or full time residents of the Berkshires and Litchfield Hills, designing a new home during this pivotal transition period provides a wonderful opportunity to impact many family members and generations. Certainly, providing a gracious and inviting residence is essential for the senior who is relocating. And for their children and grandchildren, facilitating that transition smoothly and with positive results evokes a sense of relief and peace of mind. Rarely have I managed a design project as personally satisfying as these!