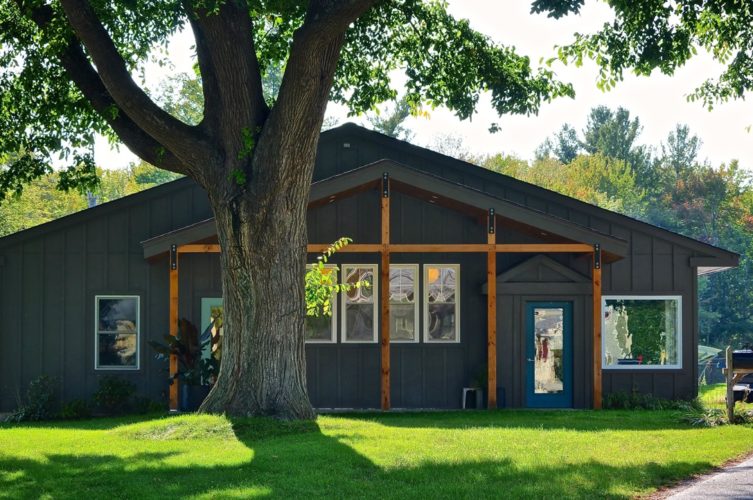 A truly effective transformation needs to be holistic. We all know that you can get your hair done and your nails painted fire engine red, but if you’re bed is stacked with dirty laundry, your checkbook is woefully unbalanced and you haven’t slept in weeks, you are no better off than you were pre-salon. The same principles for a true transformation can apply to your home, or, in this case, your business. You’ve got to do the work, and you probably shouldn’t do it alone.

When Dr. Emily Newman decided to buy Bilmar Animal Hospital in August 2016, she knew very well the inner workings of the practice, having worked for Dr. Don Gulick and his wife Claire for nearly a decade. She knew the good… a long-term family practice opened in the 1940’s (Don’s parents, Bill and Marge Gulick…thus the name Bil and Mar), was now in its second generation of ownership by beloved members of the Great Barrington community. It had a wonderful clientele of faithful pet owners, a great location on Route 7 (tucked between Guido’s Marketplace and East Mountain Medical), and an established staff of caring, responsible practitioners.

She also knew the aspects of the practice that did not reflect the image she wanted to portray as a young, engaged and aesthetically sensitive professional. The existing building, for instance, was a rather nondescript “builder-special”, sheathed in red vinyl siding with awkward lunette windows, Caribbean blue vinyl floor tile, yellowed walls and lots of cutesy animal-themed wallpaper borders used to distract from the wear and tear that had happened over years of heavy use. One employee was quoted as it “looking like a geriatric ward for animals.” Beyond needing an update to the visual impression of the facility, she also needed to re-think how the practice worked on a day-to-day way. Years of accumulated “stuff” and outdated routines had to be rethought. Emily assumed the cause was simply not enough space and, along with a facelift, the building would need a significant addition to house both the current and future services she envisioned for the new Bilmar 2.0. That’s when she called me.

Emily and I have been neighbors and friends for years. We share a similar aesthetic of unpretentious, clean, contextual and still-modern design. We also share a high respect for budgetary limitations, as she knew that minimizing debt would allow her to grow her business responsibly and with less stress. And most importantly, we’ve also been long-standing clients of hers, as she has cared for our pack for years, helped two of our previous family members cross that rainbow bridge when their time came, and even rescued one of our current loves, Lucy.

Transforming the exterior appearance would be the easy part. First of all, the building had to become visible. Emily undertook a landscape renovation, removing overgrown shrubs and thick brush along Route 7, expanding client parking, creating a new logo and new signage.

For the transformation of the building itself, one of the first things I had to do was look inward and analyze the flow of patients from car to check-in to exam room to going home again. Even though the building presented a mid-pitched gable facade toward the street, the main entrance was hidden on the side, convenient to parking, but it brought sick animals right though the middle of the waiting area, which created a stressful situation for all involved. A small area for stress-out felines was partially hidden behind a fish tank, but still, the tension was not healthy for anyone.

The gabled street-facing facade had two symmetrical gabled bays…one was theoretically an exit door, but with no weather protection or real path to access it, and the other just windows. My redesign added a new post-and-beam-style “front porch” that both updated the image of the practice as cool, modern, rural and friendly, but also would give outdoor, protected waiting space. I moved the new entry door to the previously windowed bump out. In so doing, arriving patients were whisked directly to the check-in desk without walking past other ailing pups. The previous entry vestibule could now function as a true waiting area for patients who couldn’t go directly into an exam room. The new porch also allowed us to activate the existing “exit door”, so the flow from arrival to departure was circular, a far less stressful process for both patients and their owners.

A new assemblage of windows eliminated the round-tops that seemed to be in conflict with the “modern barn” aesthetic we wanted, and Hardi-board cement siding in a new shade called Rich Espresso wrapped the entire exterior. By using relatively cost-effective features like an unheated porch addition and quality, eco-sensitive materials, we re-imaged the appearance of Bilmar in a fiscally responsible way.

The interior transformation would take a bit more work. Dr. Emily admits that she is strongly influenced by her environment and a major goal in this transformation was to create a peaceful, calm, aesthetically pleasing interior. The redesign needed to provide a “calm mental space so she could focus on being a better doctor for diagnostics.” Beyond finishes and color, the chaos of process had to be re-thought. My initial walk-though with Dr. Emily, this time as designer rather than client, was to gather information on both her frustrations and wishes for the renovation. But I soon realized that, in order to get a better sense of the “causes” behind some of those frustrations, I had to talk with the employees about their roles, their routines, and their habits. We had to find out what got in the way of each team member doing their best in providing the best care they could. This isn’t always easy, for, as we know, some people just naturally resist change. I would ask them to reenact their daily duties and shadow them, being attentive to the twists and turns, the cross-traffic, the wasted time spent searching for a file, a supplement, a prescription food, etc. A long list of issues emerged and solutions would require a lot of change.

I envision the process to be akin to one of those little wood shuffle puzzles we had as kids, where one square is missing and you have to slide the remaining pieces, one by one, to get the big picture.

As the research wrapped up, a master plan came into focus. A more clear designation of “front of house” and “back of house” had to be created. Front desk attendants would gather prescription food, which was literally stashed in every available corner of the building. The doctors had to cross through the public areas to get to their office, which can be distracting for both patient and doctor. Patient files literally filled walls, racks, boxes and sheds all over the place. Blood work equipment randomly occupied any available surface. Paper products were stacked high in an unused employee shower. In the seven mini-fridges that polka-dotted the facility, vaccines and medicines and employee lunch boxes shared shelves with kibble and cleaning products. It was easy to see why Dr. Emily assumed that the right fix would require more space, but I was hopeful that a massive cleanup of all things outdated, a re-organization of the existing space and a little help from technology advances like cloud-based file storage just might provide all she needed without the costly expense of new construction.

A rabbit warren of tiny rooms that flanked the back door entrance corridor was simplified, eliminating random niches that had become clutter-collectors. Chic rolling barn doors, painted white, created a fun aesthetic while the rooms they enclosed were streamlined and re-purposed for more appropriate back-of-house functions.

An existing kennel with a large fenced walk-out took about 100 square feet of prime space at the back of the building, but wasn’t really used any longer. We opened it up to an existing covered back terrace with sliding glass doors, converted the interior space to a dedicated employee lounge with a full kitchenette, dining area and private outdoor space. Emily then commissioned Elise Richman of Passionflower Landscape Design in Southfield to create a protected garden space off this terrace. Away from the bustle of Rte. 7 traffic, this peaceful oasis doubled as a Euthanasia Garden for the pets who had reached the end of their life here.

Our final missing piece to this puzzle was finding the right contractor. I had no doubt that Linda Shafiroff and Sarah Stiner, partners at Creative Building Solutions, could bring the right level of service, professionalism, flexibility and cost-consciousness to this renovation as they have to many residential and commercial projects for me over the past years. Flexibility and sensitivity were particularly important for this client, as the work had to be performed without shutting down the practice, and nearly every corner of the building would get touched. CBS’s staff worked odd hours, nights and Sundays, sensitive to any disruptions that would upset healing patients and busy workers. When you envision that every square foot of flooring needed to be replaced and all that entails, it was a daunting task, but the finished product made it all worthwhile.

Dr. Newman says that the “transformation has been incredible”. Not only do her employees and fellow doctors have a pride of place, but also she feels the “building reflects the level of professionalism we’ve been operating at for years.”   Improved work-flow and efficient use of space resulted in not needing the new addition, and the revamped image now befits her belief that your work environment directly impacts the quality of your work. Now, Dr. Newman can go to work in a place she considers to be beautiful, and can be a better doctor for it.