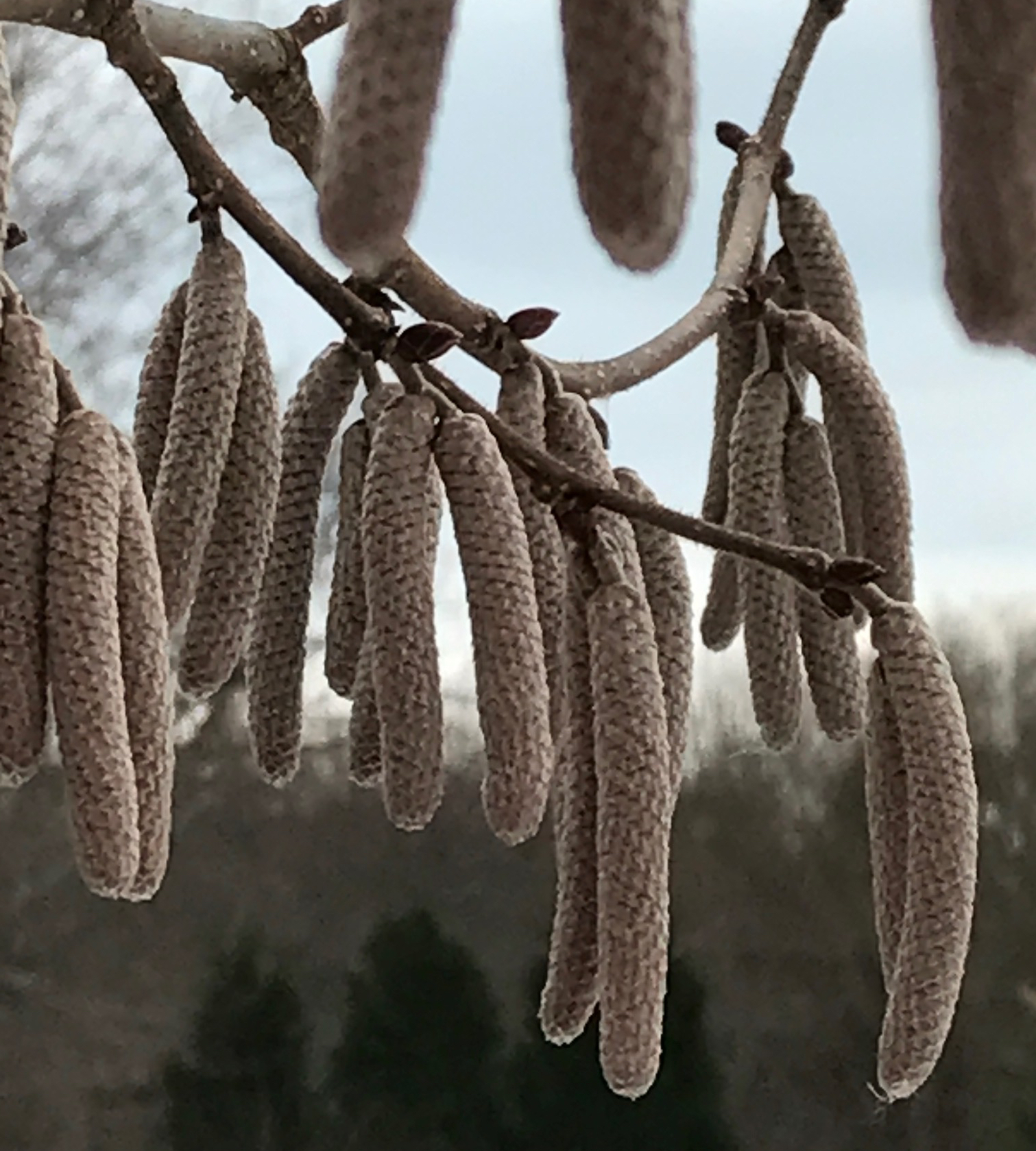 Gardeners often think of early winter as time off from outside chores (other than shoveling snow), as we rush around seeing family and friends and taking care of holiday tasks. It is true that there aren’t many pressing garden tasks to manage at this time of year, but, while in Madison, Wisconsin on New Year’s Eve, walking around the Olbrich Botanical Garden  catching up with a dear friend, I discovered a significant reason to be out in the garden, other than a much needed respite from overheated houses, automobiles, and shopping malls. Our tour, which meandered as much as our conversation, showed me that the beauty of a well-designed garden in winter could make it a place to inhabit all year long, not just on warm, sunny days in distant seasons.

When we arrived, the parking lot was filled with cars, which presumably had carried passengers to see the annual train show, but when we headed down the paths of the Olbrich’s 16 acres, Danielle and I were startled by how many people were out walking in the garden with us, despite sub-freezing temperatures and strong winds. At first, we credited this to the hardiness of Wisconsin natives, many of them of Nordic and Germanic origin that gave them the stamina to endure the winter cold. We even thought it might have more to do with a form of Midwestern perseverance that we both knew from our years growing up in Minnesota and Chicago, rather than with anything to do with the garden. But, as we walked down allees of paper-bark birches and past old crabapples with sinewy forms, laden with colorful fruits that provided food for the other inhabitants of the garden — a collection of red-breasted robins whose scarlet chests one might have thought were simply stained by the juice of the fruits if one did not know better– we discovered the motivation to be outside was more sybaritic than puritanical. These people were there to feel connected and inspired by the world around them, no matter what the season.

Danielle, a budding gardener, was as taken by the landscape as I was, drawn not only to the browns and grays of mottled bark and tree trunks, but also by the glowing red, orange, and yellow twigs of coppiced dogwoods and the chartreuse, purple and golden stems of a variety of shrubby willows. The snow served as a perfect foil to these tones and, although the beauty of this experience was difficult to capture on film, it was a lesson in taking things in firsthand. We stopped not to look at the world through the screens of our iPhones (although we attempted this, too), but with all of our senses. While there were also innumerable dun-colored grasses and seedheads left uncut for the winter, our focus at the moment was on the shapes of trees and the artful pruning that they had received over the years, as well as their bark and fruits, and the developing buds that showed the promise of what was to flower and bear fruit in the coming year.

The buds of magnolias, covered in silvered hairs that made them more stunning than many of the ornaments I saw adorning Christmas trees over the holidays, not only promised spring bloom, but promoted a sense of the magic of the moment, while simultaneously creating a surge of anticipation for the warmer weather in which they would break open. They represented hope, the future and the present, all wrapped up in a package that was the ultimate Christmas gift. The structure of the buds of a dogwood seemed to foreshadow the shape of the four-bracted flowers that would break open in the months ahead, while the tree’s exfoliating bark was highlighted in the present, only to retreat to its supporting role as the tree leafs out in spring.

As we walked about, Danielle, a Minnesota native, and I, a Chicago native living in the Berkshires, wondered why we did not design our gardens with this moment in mind? Why did we not think about what would draw us out in the seemingly never-ending months of winter to see what the world had to offer? We did not think that the other seasons should be ignored, but was it as hard to bring oneself out on a warm sunny day as it was on a cold, gray winter day in the depths of winter? And, as we took notes of trees and shrubs that we admired, as well as the architectural vines of Kentucky wisteria and climbing hydrangeas, denuded of their foliage, that shared their infrastructure with us on this cold New Year’s Eve, we both knew what our resolution for 2017 would be: To garden for all of the seasons and to get out in the garden all year long.