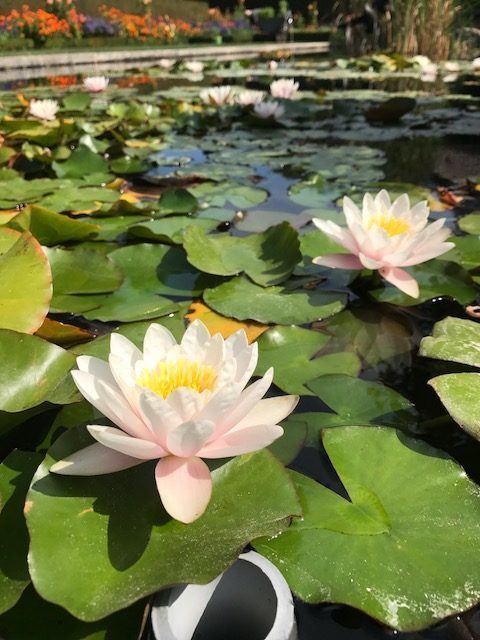 In any setting, the beauty of a water lily is on display and we can see in it what we choose, a thought well worth taking into consideration when siting them.

On two recent trips, one to Chicago and another to Northern California , I happened across the most romantic of aquatic plants – the water lily. (Lotus lovers, I do not mean this to disparage the lotus. The lotus flower is spiritual to me and, while it stops me in my tracks, its effect is more awe-inspiring and religious than romantically emotional.) What intrigued me most about these two water lily sightings was how the setting so greatly impacts the response I have to this wonderful aquatic.

The first glimpse of water lilies took place as I was strolling through Lincoln Park in Chicago, while a friend and his daughter were taking in the monkeys at the neighboring zoo. Although I am a Chicago native, and the Lincoln Park Zoo and Conservatory were regular destinations with friends and family throughout my childhood, I had little recollection of this site. The fact that I was one of the few people in the garden on a sunny Saturday afternoon in August makes me think that I am not the only one from whom this garden has been kept secret. The Alfred Caldwell Lily Pool was originally a Victorian-inspired water feature that held tropical plants, but, in 1936, landscape architect Alfred Caldwell re-imagined the site, then in disrepair, and redesigned the hidden garden to have the appearance of a meandering Midwestern river, with the addition of a few Japanesque rock outcrops and pavilions that call to mind another architect of the region whose Prairie Style was defined by the Midwestern landscape, Frank Lloyd Wright.

The site, filled with native plants and a few foreign counterparts, feels wild and unimaginably romantic in a way that recalls the overblown and overgrown passion of young love, with plants pushing beyond any known boundaries, and with the lilies filling the lagoon in a manner that felt exotic and yet familiar to me. The lilies appeared to be akin to the hardy species that filled the lake at our cottage when I was a child, and through which we would occasionally paddle on some imagined voyage to another land. And the architecture, with its asymmetry and long horizontals, reinforced this memory by calling to mind Japan and the foreign travels we dreamt of in our rowboat as we traversed the lilies on these childhood excursions. Just as in my childhood memories, the lilies in Lincoln Park showed themselves as wild and unrestrained, like the passion of a newfound love, and I could not help but fall under the spell of their romance. This tempestuous approach was compelling and exciting to me, and made the landscape come alive as if it was at the center of a D.H. Lawrence novel, or perhaps the writings of a great adventurer who traveled the world to discover exotic plants and true love.

A week later, as I visited the gardens at Filoli in Woodside, California, I saw another use of water lilies that seemed to have a different take on romance. Amongst the carefully hedged rooms and spaces of this European-inspired landscape, a few tightly geometric lily ponds demonstrated that water lilies could be used to create a softer, more civilized tone, one that called forth the romances of Jane Austen. Neatly contained in rectangles and perfect circles, these same lilies that seemed to embody the wildest of passion only weeks before in Chicago, now seemed chaste and pure, their emotions held under the water’s surface, like those of Elizabeth Bennett and Mr. Darcy. This effect appealed to me too, but in a manner more akin to the cultivated world of Miss Austen, and it made me reflect on how traits and characteristics can be seen differently, depending on the setting in which they occur.

I am not sure what I have to share about how one flower can be so different, and the role that its surroundings can play in eliciting various responses to it, but it makes me think that for every plant that I associate with one type of situation and narrative, I should begin to think about how else it can be used and what it will express in another situation. This thought seems in itself to contain the philosophies of both Austen and Lawrence, so maybe every plant and every emotion deserves a second glance and the opportunity to tell a different story.

One thought on “The Self-Taught Gardener: Water lilies, two ways”