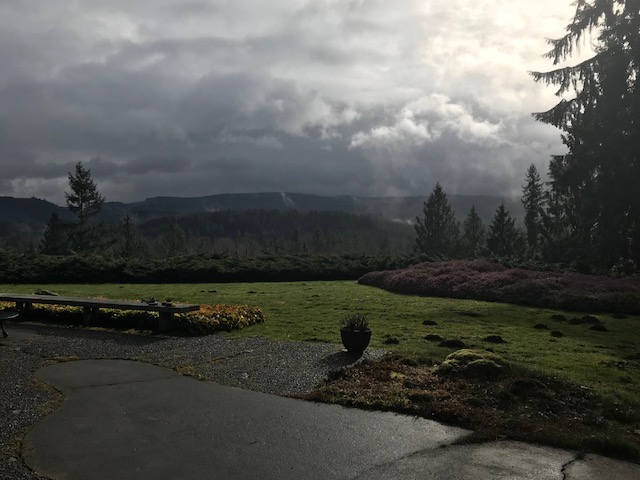 The view of Mount Ranier from Chase Garden

A notice for a film this weekend at the Millerton Playhouse and a visit to a garden an hour south of Seattle might seem unrelated, but a documentary about Garden Conservancy founder Frank Cabot and a visit to Chase Garden on its last day as a public garden are deeply connected for me.

Cabot, a horticulturist of great passion with a deeply held knowledge of plants and garden history, believed strongly that gardens are works of art that need to be conserved and he worked to establish an organization that would try and hold onto America’s garden heritage for future generations. I met him for the first time with a handful of Scilla mitschenkoana in his hands, ready for planting, in the Connecticut garden of Martha Stewart, with whom he was passionately sharing his love of this minor bulb with light blue stripes down the center of its petals.

His love of plants and the gardens they inhabit was at the center of a movement to preserve private landscapes for others to enjoy and appreciate after their owners had moved on. And the Chase Garden in Orting, Washington, was a recipient of his energy and enthusiasm. As a garden of unbelievable beauty created by a self-taught couple, Ione and Emmett Chase, it justified all the effort that went into attempting to convert into a public garden this private house and garden with a view of Mount Rainier

Unfortunately, both have been lost from public life. Frank passed away in 2011 and the Chase Garden was sold to a private owner by the Garden Conservancy, which claimed it was not able to make a go of the site as a public entity. (The Chases left the property to the Garden Conservancy upon their passing, with Emmett dying in 2010).

While on a visit to Seattle this past month, I had the opportunity to see the Chase Garden one last time before it reentered private life. It is a garden that I had come to know well over the years and each visit left me more moved than the last. Ione Chase had a way of combining the natural beauty of the region (and a lot of native plants and their allies) with a modern Japaneseque aesthetic. In all of my visits, I had the good luck of seeing the view of Mount Rainier over the house as I entered the property, something which I had always been told was a rarity, but which I never believed because the carefully articulated landscape was so magical that I imagined it had an ability to clear, at will, the skies of the rainy Pacific Northwest. This last time, when I came to the garden the sky was misty and forlorn and the mountain, perhaps in mourning for the loss of this garden, was shrouded from view.

As I walked the garden, I saw a property in transition, its natural beauty was unmistakable, but so was the imprint of humanity, first that of Ione and Emmett, and later the imprint of volunteers and staff who cared for the property as it tried to find a place for itself in public life. My friend Peter Wooster believes that gardens should not outlast their creators and should simply be turned into the earth. In many ways, I understand his desire not to want to watch something transition from a lovingly cared for landscape into something else. But, as I walked through the narrow paths that mimicked the ravines and paths of the mountains, and stepped into the lower garden filled with ferns and towering firs, I also felt curious to watch this garden evolve. Perhaps its new owners will afford it the same level of care, or perhaps they may simply allow it to transition into a landscape somewhere between the natural and the cultivated, but to my mind the landscape, like my memory, will still be instilled with the wonder of the work of the people who once lovingly shaped the landscape in the work of art it once was.

As we headed out the drive, three fawns pranced across and headed into the garden with its heaths just coming into bloom. I half-wondered if these deer were the new owners and, in a way, they were. This garden would belong to nature and to those who would appreciate both what was there naturally and the handfuls of snowdrops Ione had planted over the years and that had multiplied, not unlike the bulbs Frank planted in Martha’s garden. This combination of human touch and nature’s ability to move forth and multiply is the connection between two worlds, held in balance with one another.

The mountain was still not showing itself as I turned away, but would reveal itself later that week as I headed back to the airport. Its sight brought me back to a magical landscape, both real and imagined, and to two gardeners whose impact on the world would always be remembered.

2 thoughts on “The Self-Taught Gardener: The thrill of the Chase”