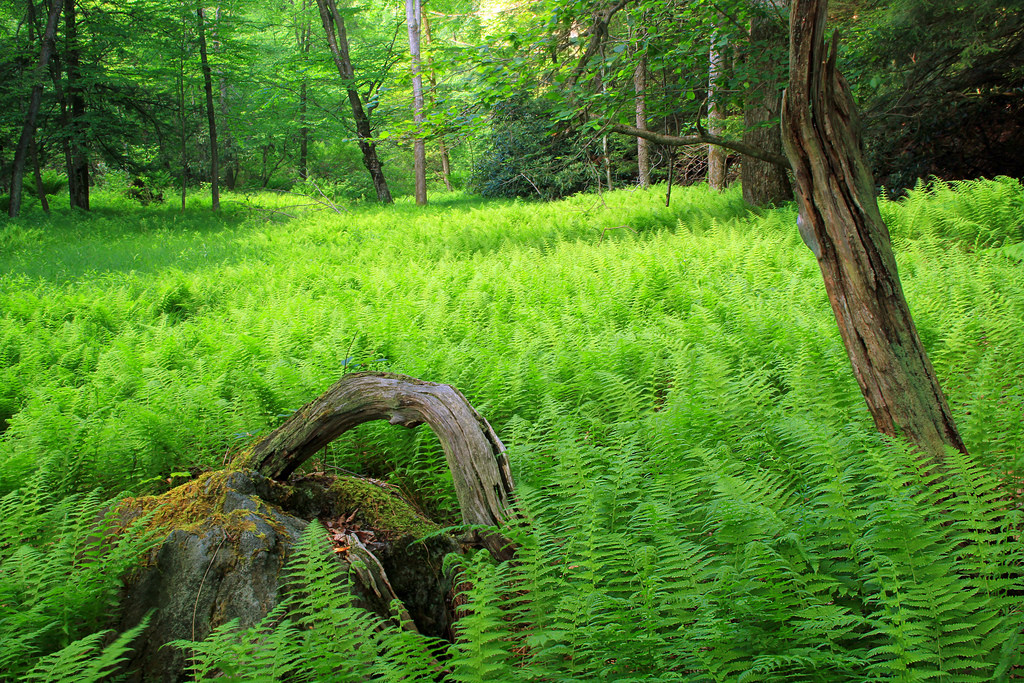 I remember once having a conversation with the nurseryman Tony Avent, whose Plant Delights catalog is filled with rare and unusual offerings, about the difficulties of combining plants in the garden. I expected Tony, in the redneck North Carolina accent that he works as hard as possible to maintain, to go on about the virtues of the foliage or flower of some unexpected classification of plants, perhaps one of the varieties of Rohdea or Japanese sacred lilies that he collects and offers in his catalog. (His passion and plant knowledge always betray the redneck persona he attempts to wear; he is a serious plantsman). I imagined he would go on about how its prized foliage would unify the border. But I was amazed with his answer: “Whenever I do not know what to put into a border (which I imagine is rare), there is one easy answer, FERNS.” He went on to opine about ferns for acid soil and alkaline soil, moist sites and arid deserts, and ended by saying that there is a fern for every situation and that they are never out of place. And then of course, he went into whispered tones about how ferns have weird sex, but that is for another day.

This season, as the rainy spring mornings give way to sunny summer afternoons, and as I plan for my move to the Midwest, running from the moving supply store and charity drop-off bins to the homes of a few friends where I am placing a few favorite plants for adoption, I have concluded that Tony is spot-on about ferns. These ancient non-seed forming plants are good team players and always seem to unify the landscape. From the hand-shaped fronds of sensitive ferns on sunny roadsides to stands of evergreen Christmas ferns on the edge of coniferous woodlands, these plants always seem to be bringing the mix together.

Along the roadsides, I see running drifts of hay-scented ferns that spread to cover the edges of forest glens, with their leaves held up like the fine lace handkerchiefs of southern ladies that Tony would declare not to know. The late afternoon light flows through them, casting shadows like those from the lacy curtains of old country houses, breaking apart into patterns on the woodland floor. On one note, Tony would be wrong about this particular fern, as it is not one to mix in borders and is happy instead to spread and function more like a groundcover. And if it were not native, one might be concerned about using it, but in my estimation, it certainly serves as a fine alternative to vinca or pachysandra as a groundcover. And it can simply be cut back with a lawn mower once the season has passed to rise again the next spring. I am moving some around my property before I head out of town to take on a new opportunity, hoping that upon my return, they will have carpeted the area along the side of the house. After all, ferns have been coming up in our landscapes for as many as 350 million years, and I am pretty certain they were not being carefully tended back in the Paleolithic Era.

The ostrich fern also could serve as a ground cover and will even take its share of sun if it is receiving adequate moisture, but a gardener might consider adding this native fern to the kitchen garden. It would make sense to use this deer-resistant plant (all ferns seem to be disliked by deer) as a border around the vegetable garden because its fiddleheads can be cut judiciously and eaten before they unfurl. Its young edible croziers or fiddleheads are great sautéed with olive oil and butter and compete with that other spring perennial vegetable in terms of timing and taste, the asparagus. I am not sure why these ferns are not a part of every vegetable garden. They are easy to grow and good performers, provided they do not overrun their bed. A simple cut back with a spade can keep them in check and provide a slip for a sated dinner guest to take home and plant in his or her own garden.

But these ferns, while great additions to the garden, might not be the choice for an ornamental border where one wants a fern to know its place. In this case, there are other ferns, such as lady ferns and Japanese painted ferns, that know how to play well with others and not quickly overrun their space. Perhaps the most spectacular of these is Osmunda regalis, the royal fern, which will create feathery fronds that can reach six feet in height in a moist, fertile location and can take full sun when given consistent soil moisture. This fern spreads, but very slowly, with the grace that its name seems to belie. Its common name might reference royalty but it is a native, and perhaps this adjective is more about its stately presence than about its provenance. And like any good statesman (not that we know the type lately), it seems to mix well with others, both foreign born and native.

I particularly remember one planting that perfectly illustrated the way ferns know how to be a perfect foil to other perennials. It was in the garden of my dear friend Henriette Suhr where Athyrium ‘Ghost,’ which her friend Dr. John Mickel had selected from a sport in the garden, was paired with a perennial impatiens grown more for its foliage than its flowers. The silvered, gray-green fronds of this fern were used like a ray of sunshine coming down next to the dark green striped foliage of Impatiens omeiana (this rare hardy impatiens can be found through Opus, the specialty nursery of plantsman Ed Bowen in Little Compton, Rhode Island.) If this fern were a ghost it would be that of an old-fashioned antebellum South Carolina woman who knew she was shown to best effect when her subdued and elegant looks were used to allow those around her to take center stage. Visitors to the garden would first notice the impatiens and only then take notice of its foil. I imagine it was the fern that taught Tony, always the southern gentleman despite his efforts to appear otherwise, that there is a place for a fern in every border.