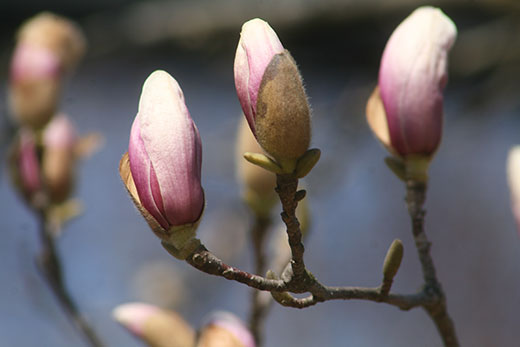 As I listen to our new EPA Administrator Scott Pruitt claim that manmade CO2 emissions do not impact the world around us, I cannot help but think of the role that weather plays in our lives as gardeners. At this time of year, I am especially reminded of my dear friend Henriette Suhr, who created Rocky Hills in Mt. Kisco, New York. In the last years of her time on Earth, I spoke with her almost every morning. This is the season in which she would call and express her concern about the survival of some of the plants in her garden, particularly her beloved rhodies, and in a month when the weather peaked at 70 degrees, then dropped to 10 degrees a few days later, only to be followed by a freezing rain, her concerns would be heartfelt and sincere.

Henriette did not doubt the causes of climate change, and over her 98 years on Earth, she saw plenty of change. In her last years, winter storms brought down towering spruces and hemlocks that sheltered her beloved tree peonies and azaleas; unexpected torrential downpours swept away paths at Rocky Hills along with a fair amount of topsoil; and increasing winter winds and temperature fluctuations could easily cause her rhododendrons and magnolias to break bud too early, damaging their beautiful flowers. But, like any concerned citoyen du monde, which she truly was, Henriette’s approach to all of this was multifaceted. And she adapted, like the plants themselves, to do all that she could to preserve the plants she lovingly selected over the fifty years in which she created her garden.

A winter visit to Rocky Hills, particularly in the last decade of Henriette’s life, was like visiting a summerhouse closed for the season. Throughout her garden, Henriette had meticulously built windscreens, made of wood and carefully trimmed burlap, to protect her plantings from intense winter winds. This was the equivalent of placing sheets over the summer furniture. Evergreen boughs were placed over Himalayan ferns and hellebores to shield them from the mysteriously sultry days of January that were often followed by Arctic blasts that would have damaged emerging fronds and flower buds as they responded to the warm days that had preceded the cold.

And, most notably, the weeping Atlas cedars on her terrace were artfully wrapped in burlap to be unwrapped in mid-April as the weather stabilized. A bit lazier myself, I planted the Blue Atlas cedar at my old house above a ravine which served as a heat sink for the cold air that might come through, and this helped to mitigate any winter damage from fluctuating temperatures. Similarly, I planted my figs up against a brick wall that radiated heat and provided a microclimate for these marginally hardy plants to survive the winter and bear fruit the following summer.

Because weather has always been variable, gardeners have carefully sited plants, and built and planted wind-screens, to protect cherished plants from extreme seasonal fluctuations throughout the ages. But, it seems las if we are entering another time. Horticulturists at plant collection conferences now express their concern about the survival of decades-old plant collections at botanical gardens around the country. Weather change seems to be threatening collections. One option is to share plants with other (typically more northern) gardens, where conditions are now better suited to their survival than the gardens they were placed in decades ago, but political differences over the reality of climate change is interfering with fundraising for such projects, particularly in more conservative locales.

While I do not agree with Mr. Pruitt’s take on climate change, the reason for weather change is not at the center of the debate; what we can do about it is. My childhood in Chicago along Lake Michigan provides me with a lesson about how we can impact the environment. I remember sad walks as a child along the lakeshore before the EPA set standards for the steel industry that operated on the shores in nearby Gary, Indiana, and Milwaukee. In 1973, the beach was strewn with dead, rotting fish; today, the waterfront walk is one of the glories of the city. What better proof of how we can – and should — impact the world around us, regardless of our politics or who we care to blame for environmental degradation.

It is true that plants may adapt over time (although this time period is usually eons), and we can see this in Henriette’s beloved rhododendrons. It is thought that some members of this genus have evolved to curl their evergreen leaves in cold temperatures as a method of slowing down the thawing process in the freeze-thaw cycle to minimize damage and to even change the angle at which the leaves hang from their petioles to inhibit cell damage from the effects of intense sun at cold temperatures. These adaptations may make some rhododendron species even more garden worthy in a changing climate.

If individual gardeners feel it is worth making an effort to ensure the survival of beloved plants, I do not doubt that as a society we can find a way to do our share to care for the environment. After all, if plants can evolve, can’t we?

2 thoughts on “The Self-Taught Gardener: The fretting season”