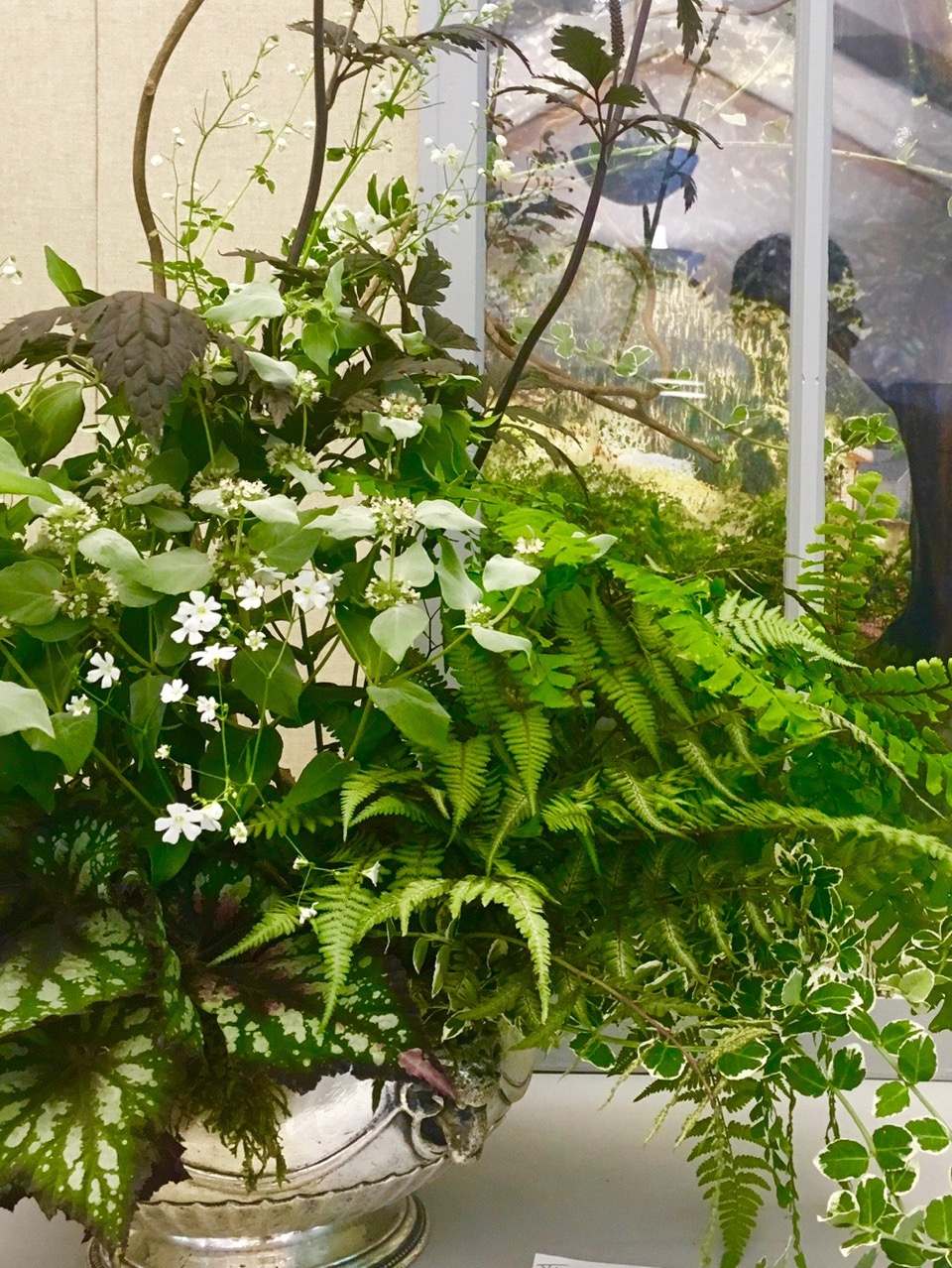 Stockbridge — Maybe it is just a response to getting older, or maybe it is simply a response to the heat, but this summer I have found myself drawn to a plant palette that is about as broad in its range as my graying hair. I had hardly noticed my attraction to the soft, cool tones of silver foliage and white flowers until I worked with my friend KK Zutter on an arrangement for the Berkshire Botanical Garden’s Grow Show. KK and I had decided we were going to be relaxed in our approach to this (I had never done such an event before and had agreed to do it only as KK promised we would have fun – and we did). But I did not realize that this simple event would get me thinking about the color composition of my own garden.

We met in advance to plot out what we were doing over a leisurely lunch, and decided we wanted our arrangement to look like it was an extension of the garden that was the backdrop (along with a window frame) for the display. We had some ideas of how we wanted to work with this, but we decided we would bring a variety of flowers and foliage forms and complete it on site that morning. We had thoughts of silver, green, and purple foliage along with pink, purple and orange flowers, but as we started to put together our arrangement and as the temperature outside rose to the mid-nineties, something interesting happened. We found ourselves drawn to an ever-simpler palette. As we added in maidenhair and painted ferns (including the near white variety ‘Ghost’ selected by John Mickel), white and green variegated euonymus, the shiny green leaves of European ginger, a white flowered meadow rue from Avant Garden’s Kathy Tracy that had foliage like a maidenhair fern, and the silver bracted flowers of mountain mint (which has a clean, slightly minty scent), we found that the soft tones seemed to bring the temperature down in the room. And every time we went to add in an orange cosmo or a purple aconite or any color other than a purple leaved stem of bugbane, we looked at each other and said no. We had found our palette.

The next weekend, a potted Amazon lily came into bloom on my porch and I once again felt the cooling effects of white, this time enhanced by the lemony fragrance of the flowers. As I enjoyed the sense of relief from the summer heat, I came to realize that, although we often associate summer with the oranges and yellows of cosmos, sunflowers, and marigolds, and the bold jeweled tones of dahlias and zinnias, I wanted a spot in my summer garden that was dedicated to softer, cooler tones of silver, green and white, perhaps with some soft blue which might call to mind the ocean and cool breezes. I would think of it as the garden equivalent of an air-conditioned space – perhaps creating some high shade with a bench below to take in the summer calm.

A week later, as I headed to an evening event at Hollister House Garden and came across a wonderful seven-foot tall aster, I added it to the plant list for my summer white garden. And I began to think of other plants to add to this area. Of course, the most commonly replicated garden of all might be the White Garden at Sissinghurst, with its signature silver weeping pears that sadly do not flourish here due to their susceptibility to fire blight. But artemisias and painted ferns would give me the silver tones that I wanted, as could the silver backed leaves of sweetbay magnolias with their creamy, fragrant white flowers. White Japanese anemones might float above, along with the shimmering white pineapple lilies held aloft their soft green leaves. There would also be a stand of the aforementioned aster from Hollister House. And, with any luck, in summers to come, I will simply cool myself down as temperatures rise by setting myself down amidst a border of soothing summer white. There would still be room for color in other areas of my garden, and of course, as the season moves forward into fall, with all of the glory that is New England at season’s end, but for one brief moment, I will take leave of color and let white reign supreme.