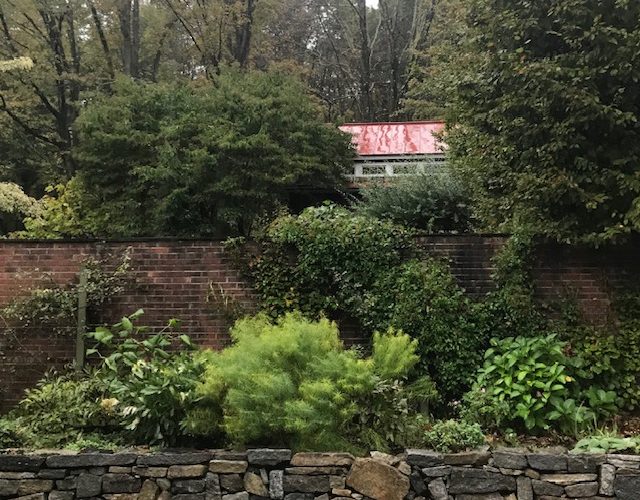 I feel a haunting nostalgia for my former gardens. Those landscapes, filled with some plants long passed and others still alive, are a part of who I am. They shaped my sensibilities and define the eras of my life. Some plants call to mind my early passion for gardening, with their over-the-top forms: a ruffled tulip, a giant mophead hydrangea, a dinnerplate dahlia. Others call to mind the evolution of my sense of beauty over the decades: a simple wild wood aster, a species of lily, the fading fall foliage of ferns, the beautiful tones of a willow leaf bluestar at season’s end. They also call to mind the passage of time, through the seasons, over the years, and through a lifetime — a thought that came to me last week when I went back home to the Berkshires for a brief stay at my house in Ashley Falls, which I had not seen in almost a year, and also visited my old garden in Connecticut.

As I drove in from Bradley Airport, along country roads raked by the late afternoon autumn sun, I was taken by the proliferation of New England asters along the roadside, backlit and profuse beyond any memory I had of them. Perhaps this was their year, I thought, with ample rain and the right conditions, or perhaps the landscape was evolving and the conditions were shifting in their favor for the next period of time, like the beeches that could be seen making their way under the old ashes and sugar maples in the woods, simply waiting for the time when they would come into their own and become the overstory of the woods. I had been chronicling the beech’s growth over the past two decades, particularly in the fall when their leaves turn butter yellow. By holding their leaves longer than many of the other deciduous trees in these woods, these beeches allowed me to take a census of them each year at season’s end. It was wild to watch their progression through time, and I looked forward to the moment of full glory in the decades ahead.

Much of my life in gardening has been focused on the care and preservation of historic sites, with little consideration for the cycles and progression of time that move plants forward. Gardens are not lawns that are simply shorn each week to be held in check, providing a green sward that is consistent through the ages. Gardens are mutable and transient, and, if we allow them to progress forward, it is in this process that we can find their beauty. Back in the Berkshires, a view of the entrance to my house in Ashley Falls, overtaken by wispy grasses and a smattering of self-sown plants, was not what I had left behind, but it had a transcendent beauty that reminded me of everything I loved about this home and my time there. It caught the light and the wildness of the site and the region in a way that all of my gardening efforts had not. And it was exciting to think of how it would evolve, as the weeping styrax planted there takes on size or when, in spring, a variegated filipendula and a rare fritillaria come into their own, just before the peonies bloom. It was also fun to see old stalwarts, such as the baptisias and bluestars, burgeoning over time with little care, intermixed with newly sown asters and jewelweed.

If watching how things move forward on their own was illuminating and moving, seeing what happens to them when cared for by others was emotional on another front. As I drove by my old house in Connecticut, the clapboard now painted black with crisp white trim, I realized that the hand of man can also impact the landscape as it moves forward. Two tightly pruned hornbeams in front of the house had been removed, and the hornbeam hedge in the back garden and the box parterre had been allowed to grow. Both of these areas, as well as the climbing hydrangea that was carefully trimmed to cover a portion of the garden wall, were larger than I had ever planned for, and I had some concern that the hornbeams might be out of control. Yet, there was a beauty to be seen in how the new owners approached the same landscape, and how over time, it would belong to them in the way that it had once belonged to me. And, if I had any concerns or emotions about that change, the maturing stewartias and snowbell, resplendent in their adult form, reminded me that the passage of time brings many emotions along with it, a little grandeur, and a smattering of dignity.

One thought on “The Self-Taught Gardener: Succession gardening”