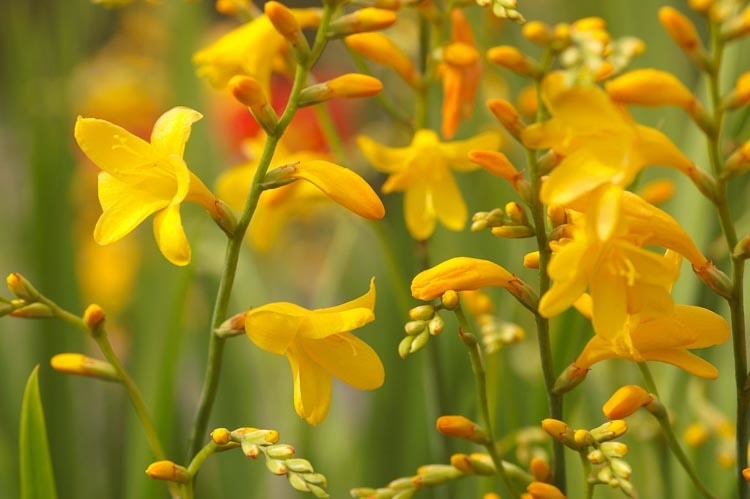 Yellow Crocosmias, known as Honey Angels. Crocosmias are native to Africa but often can be grown in much colder climates with the right snow cover.

From a board meeting in Minneapolis to a weekend visit to a loved one in Portsmouth, New Hampshire, I spent the past week traveling about in a world coated in a blanket of white. Wherever I happened to be, I could not help but imagine what might be lying beneath that protective cover that calls to mind the swaddling that wraps and protects a newborn baby, keeping it safe from the elements.

When I see the world covered in white in this manner, I also think of Ellen Hornig, whose Seneca Hills Nursery was a source for innumerable perennials that seemed as if they came from another world. And I never would have guessed that the other world was, in fact, Oswego, New York, on the Canadian border. That’s where Ellen lived and taught economics, while also running her mail-order nursery. Seneca Hill is now closed and missed by many, but the vision of it lives on so in my mind that each time I see a snow-covered expanse I think of how it provided Ellen with a unique habitat for growing plants.

Ellen grew her plants in the USDA Zone 5, and if they were not really from another world, they certainly were from another part of this world. Ellen grew plants that rightly belonged in zones where temperatures never dipped to the -10 F that her region could hit in late January. Ellen’s great love for horticulture included a special place for the plants of South Africa, particularly the bulbs of the region, and she was able to grow them perennially in a manner that failed me in my own Zone 6 garden in Connecticut, despite my numerous efforts to push them northward a zone or two from their natural hardiness zone. So how was Ellen managing to grow them hundreds of miles north of me?

Her secret was quite simple. While I was working in a zone warmer than hers, she understood and offered her plants something that I could not: a season-long layer of snow, feet-deep, that swaddled and protected them underneath its cover. At first I was stymied by how this worked until I realized that her plants were insulated from the colder temperatures by a layer of snow that protected them from the brutal winds and temperature fluctuations that my warmer garden experienced when there was nary an inch of snow on the ground (something increasingly common in the past decade or two.) Of course, this allowed her to grow South Africa irids, such as crocosmias, also known as coppertips or falling stars, which never came reliably back for me. (I have subsequently found one cultivar of this genus that does come back from year to year. Of course, it is the red-flowered ‘Lucifer’ when I would so prefer to be bedeviled by a yellow- or orange-flowered variety.)

She was also able to grow pineapple lilies or Eucomis of many varieties that were barely hardy to Zone 7. These lily relatives, with their pineapple-shaped inflorescences replete with a ruff of foliage atop the fruits, were relegated to pots in my garden that came into the garage come frost, but seemed to overwinter just fine under several feet of snow for Ellen. Hard as it was to believe, I started to envy the harsh winters that she had, envisioning all the plants that would do well for me if only I were further north, hardly the zone-envy gardeners are typically known for.

I even started to be jealous of friends in more snow-covered sections of the Berkshires, or Norfolk, Conn., where the snow seems to remain from November through April. But as my own life leads me further north, in my sojourns in Iowa and Minneapolis, as well as at my house in the Berkshires (which sadly is on the southern, warmer end of the mountain range and at a lower elevation at that), I simply pull the covers over my head on a cold night and keep myself warm. It is in this state that I dream and imagine what horticultural treasures I might someday be protecting under a blanket of their own.

________
A gardener grows through observation, experimentation, and learning from the failures, triumphs, and hard work of oneself and others. In this sense, all gardeners are self-taught, while at the same time intrinsically connected to a tradition and a community that finds satisfaction through working the soil and sharing their experiences with one another. This column explores those relationships and how we learn about the world around us from plants and our fellow gardeners. 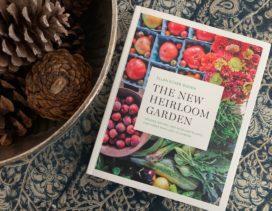 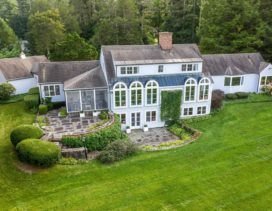 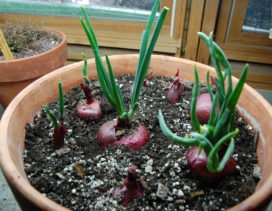 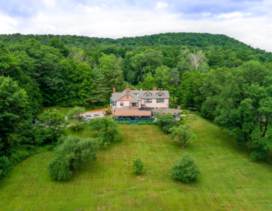 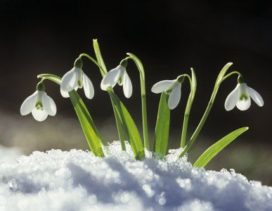