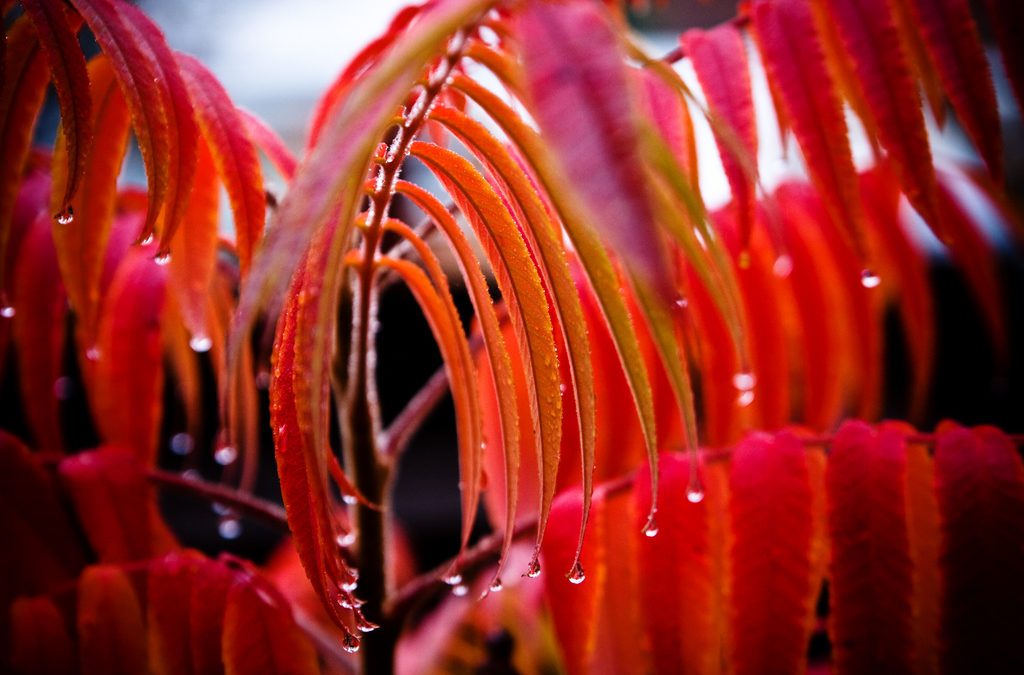 As the fall season progresses (and as I make good on my promise to track the fall foliage sequence), it has occurred to me that, with some exceptions, plants that take on crimson tones seem to color later in the season. This observation has led me to want to understand fall color better. I have now learned that the fall foliar display of red leaves results from a different process than that of yellows and oranges. Yellow and orange tones already exist in the leaves. As cooler temperatures trigger the end of chlorophyll production, the green of the leaves fades and the undertones of yellow and orange (from chemicals known as carotenoids) come to the fore. But the red tones involve a different chemical process, and there seems to be some question as to why this process takes place.

It is the production of anthocyanin that causes the leaves to turn red. It also causes the coloration of the fruits of raspberries, blueberries, and blackberries, which contain this chemical. But what makes this color factory in the foliage of trees, shrubs and vines shift into high gear so late in the season? Is there any pattern that explains which plants will bear this scarlet imprint? In searching for answers, I came across several theories of why we are seeing red so late in the season.

For many years, scientists have suspected that this production of anthocyanin served an evolutionary purpose. One theory suggested that these red tones formed a sunscreen to protect the plant’s foliage from the increased exposure of fall sun; another posited that it served as a form of antifreeze to prevent foliar damage in the fall as the plants transfer their energy from their leaves into their roots; a third proposed that the crimson tones are unattractive to aphids and other insect pests that might otherwise be tempted to lay their eggs amidst the declining leaves. This last theory seems to be borne out by a series of experiments that show that aphids and other pests are more likely to lay their fall eggs in yellow or orange foliage. And a fourth theory suggests that some plants, such as poison ivy and Virginia creeper, that rely on birds for seed dispersal may use red foliage to attract migrating birds to their ripening fruits and seeds. The flaming fall foliage of poison ivy sends a signal to me as well – to take note of this phototoxic vine and to stay away (or even better, to eradicate it.)

Anthocyanin production consumes a lot of the plant’s energy at a critical moment in the season, which is what has lead scientists to believe there must be some evolutionary strategies at work. Otherwise, why would plants be expending valuable resources just as they should be storing energy for the winter? Of course, it is possible that there is more than one reason for these leaves taking on their rosy hues, and, in fact, each of these theories may hold some truth.

But recently, Simcha Lev-Yadun of the University of Haifa-Oranim in Israel and Jarmo Holopainen of the University of Kuopio in Finland have posited a more complex theory about these deciduous fall flamers (for lack of a better term). These plants, like many of our trees and shrubs, are the descendants of ancient evergreen subtropical and tropical forests that covered much of the earth 35 million years ago, before the Ice Age. Plants and insects would spread north or south during the various cooling and warming stages of the ice age. To ward off insects that preyed on them, plants evolved to have deciduous leaves that would turn red and drop in the fall.

Noting that certain regions of the world, namely North America and East Asia, had more colorful fall foliage than areas such as Northern Europe, where native trees and shrubs have primarily oranges and yellows, Lev-Yadun and Holopainen looked for geological reasons for such a pattern. They concluded that the Alps (which run east-west) prevented plants and insects from migrating north and south during the drastic weather changes of the Tertiary era, whereas the mountains of America and Asia (which run north-south) allowed migration up and down the continents. While red-leaved species were extinguished in northern Europe, they found protected areas in East Asia and North America that enabled them to elude extinction. Species distribution and statistics seemed to support this theory, but the final proof was in the exception to the rule: the fact that dwarf shrubs in the northern climes of Scandinavia turn red in the fall. How to explain this anomaly? It turns out that these dwarf shrubs and the insect populations that co-exist with them can survive the winter because a snow cover protects them from extreme cold. Because both insects and shrubs have survived, the plants still need to pursue their evolutionary strategy of producing red fall foliage.

So, from now on, when fall takes on its crimson tones, I can thank these crimson beauties (as well as the lady bugs) for helping to control my aphid population. And I can be grateful for all of the Asian and North American trees and shrubs that allow me to see red this season.

One thought on “The Self-Taught Gardener: Seeing red”