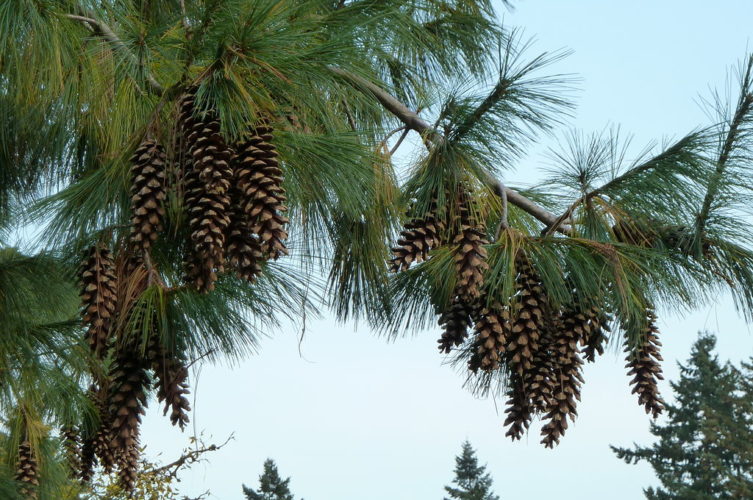 The Himalayan pine makes one think throughout the year of its snow-covered glory with its slightly pendant lower branches and needles.

Every plant has its season of glory. Even evergreen conifers, which seem to go through the seasons unchanged, have their moment of glory and their time is nigh. And in the winter, one genus comes to the fore for me like no other, and that is the pines.

When I had the pleasure of studying garden design in Japan, my reverence for the artistry of these trees grew. This was not surprising; some of the most artful pines originate in Japan. The Japanese white pine, Pinus parviflora, has all of the magic and elegance that we ascribe to a Japanese garden – its strong horizontal branches can reach gently to the sky in a manner that borders on the religious.

The Japanese black pine has a similar grace but, while its white cousin demurely and subtly lifts its branches upward, many varieties of the Japanese black pine raise their arms as if singing a Hallelujah chorus. Cultivated selections of both of these pines can take on additional forms and are well worth considering for the home garden. Because they can be shaped, both of these trees are often used in the art of bonsai, but their form can also be modified in the garden so that one of nature’s most artful trees can reflect the work of humankind.

For those who prefer American natives, the eastern white pine, almost ubiquitous in some areas of the Northeast, offers artful weeping forms, and a number of available cultivars have a subtle grace to them as well. The straight species itself is one of the tallest growing trees in North America. As it matures, it tends to lose its lower branches, making it the inspiration for disguised cell phone towers that use a few fake branches 200 feet in the air (perhaps the worst false Christmas tree on earth.) But a stand of mature white pines has the opposite effect, creating a wonderful green canopy with soft needles that capture the light, refract it and cast it onto the landscape below. Young white pines are not completely uncommon as a selection for a Christmas tree, although over the years spruces and firs have taken center stage, leaving even the more artful Scotch pines behind among our most popular Christmas tree selections.

All of these pines are landscape worthy and, when frosted with winter snow, each is reminiscent of the simple elegance of Japanese brush paintings. At home, I have a 19th century ukiyo-e that highlights the artful way that pines hold their needles, typically in clusters of 3, 4, or 5. This grouping of needles into clusters is part of the magic of the genus. Once, in the garden of a temple in Kyoto, I saw a young man painstakingly plucking needles from a Japanese white pine, reducing each cluster from five needles to three. Such was the tradition at this particular garden. This young gardener was on the job all day, standing on a ladder performing this task with careful attention to his work. The goal was to give the tree a sense of openness, an act decidedly Japanese in its approach that I would recommend only to the most patient of gardeners.

All of these pines have a beauty and personality that make them shine, but for me, the two pines I love most require a trip to the mountains of Korea or the Himalayas in order to see them in their native state. Unlike the Japanese forms with their outstretched, up-reaching limbs, these pines have a more elegant (in my opinion) and demure carriage. Although stately in their size and scale as they mature, both the Himalayan and Korean pines belie in their form their home territory and the weather they endure. I do not know if this form, with slightly ascending branches sitting above horizontal branches that gently bend to the earth, with their needles turning downward as if weighted by snow, results from centuries of adapting to the colder, snowier regions they inhabit. But I do know that, when it comes to the season we are now entering, these two forms are the star performers for me in a genus that takes center stage as winter commences.

One thought on “The Self-Taught Gardener: Pinings”