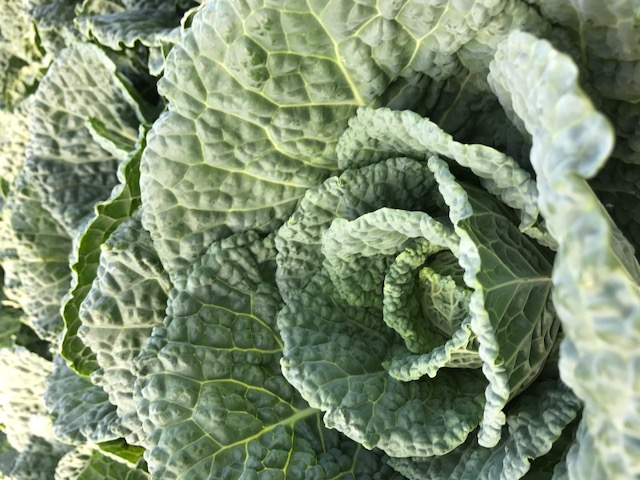 The pustulated leaves of this Savoy cabbage capture the light, and layered leaves surrounding its edible head take on the appearance of a flower. In its form, I also see something else: a savory winter meal.

As the weather changes, so does our plant palette, and for some reason fall has become a season of mums and ornamental cabbages and flowering kales, usually set out side by side in the garden, in containers, and crammed into front borders to extend the season. I certainly understand the desire for drawing the season out, and even understand the choices of the species involved. Mums, in their less managed forms, are wonderful loosely flowering plants, and in their cultivated state can include many flower forms, like dahlias, that are absolutely breathtaking. And who does not love the curves and colorful leaves of cabbage and kale? I am always puzzled when these plants are restricted to the vegetable garden, because the foliar forms of most these brassicas are as ornamental as most flowering annuals or foliage plants such as coleus. And you can eat them!

For years, though, I have been confused by the concept of ornamental cabbages and kales that are planted but not eaten. I’m thinking of those pink, chartreuse and icy green colored cultivars that are planted simply for their leaves (often fringed) that create the illusion of flowering. Every year, I am determined to make a second sowing of edible brassicas, so that my late fall garden might be filled with ripening purple and Savoy cabbages and pustulated varieties of deep green kale, but I never seem to manage to start them from seed in the midst of summer. And before I know it, it is too late and my options are limited to whatever I can find already started at the nurseries.

So this year, when I was walking through Gesthemane Nursery in Andersonville, an old Swedish neighborhood in Chicago, I was delighted to see, alongside (although primarily in place of) the usual ornamental cabbage varieties of the season, the brassicas of my dreams, my ideal garden, and my larder. Two of the species in the genus Brassica provide some of our most significant cool season food crops: kale, cabbage, broccoli, cauliflower, Brussel sprouts, collards, turnips, rutabagas, kohlrabi and a variety of Asian greens and mustard greens that extend the list beyond imagining. Unlike their ornamental cousins, these crop types were selected over the centuries for their different edible parts. Broccoli and cauliflower for their edible flower buds; cabbages, collards and mustards for their edible leaves; and turnips and rutabagas for their roots that are perfect for roasting on a cold winter’s night.

Additionally, to my eye, purple cabbages with their dusky foliage, and “Lacianato” and “Nero de Toscana” kale, were more beautiful than the pink and white forms that filled planters throughout the neighborhood. Or so I thought.

But as I walked about the neighborhood, I worried that perhaps the restraint of my color scheme was off, and I too might crave the bright colors of the ornamental varieties. Perhaps I would even go for a few pumpkin-colored or yellow mums to add to the mix. I fretted that I was too conservative and practical on this front. Was I loving the Savoy cabbage for its beauty, or for the fact that I would later blanch it, coat it lightly in a béchamel laden with nutmeg and ground pork, top it with Parmesan, and gratinee it? Was I hungry for a softer color scheme or just something to harvest later that season as temperatures dropped and the mums lost their leaves and flowers?

I left the neighborhood thinking that perhaps I am too practical. The next day I headed for a meeting at the Chicago Botanical Garden. As I crossed a bridge to the vegetable and fruit island (who knew such an island existed?) in the company of plant collection director Andrew Bunting, I noticed a familiar color scheme on a series of terraces leading down to the water. There, in neatly placed rows, I saw cabbages and kales, as well as some onions and leeks, creating a layered pattern that was soothing to the eye. And its palette also seemed like something that could satisfy my palate, for the layers of cabbages and onions inspired me to think about layering my favorite winter cabbage dish with another genus known for having both ornamental and culinary advantages: the alliums.

Here’s to a long, muted, and savory winter of perusing seed catalogs so that next year I can expand my palate. Or is it my palette?

One thought on “The Self-Taught Gardener: Of cabbages and kales”