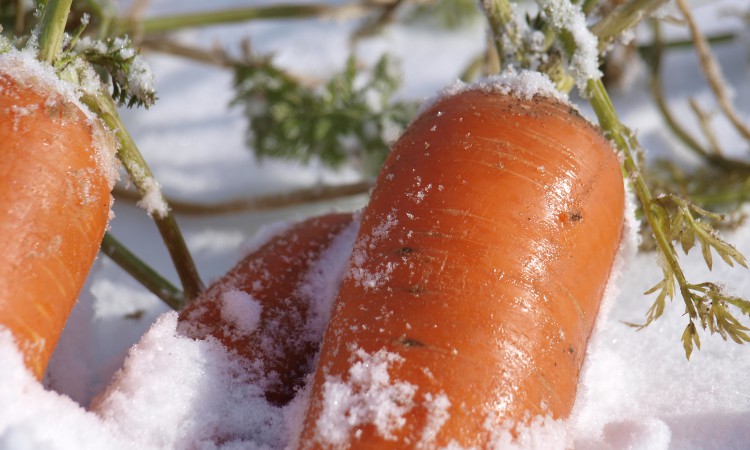 Carrots take on an added sweetness as temperatures lower.

Anyone who likes to cook understands how heat can impact the taste of onions. The caramelization that occurs as onions slowly cook on the stove and as their sugars and carbohydrates take on rich golden tones brings out their hidden sweetness. But vegetable gardeners know something else – the sweetness that comes on in cool temperatures for many vegetables (and perhaps for many gardeners, as well. I, for one, become sweeter in the fall, hoping that someone will help keep me warm through the chilly nights of winter.) It is an age-old adage that the best Brussel sprouts have been sweetened by a light frost, which seems to temper the bitterness that can be evident when these brassicas are harvested earlier in the season, before their sugars rise. And vegetable garden guru Elliot Coleman considers carrots harvested after a frost to be a completely different vegetable, and that he loves to grow for children. These “sugar carrots” are as satisfying as a cookie to the sweet tooth of an eight-year-old, and pack a more satisfying crunch.

Leeks, celery root, parsnips, cauliflower, turnips, kale and collards … the list goes on. But why would cool weather cause these plants to take a turn to the sweet? Are they, like me, looking for something to protect them from the cold? It turns out that they are, but as sessile organisms they have less chance than I do to find someone to protect them from the cold, so they need to figure out how to do it for themselves. It turns out that the process is quite simple. As temperatures lower there is one thing that can protect these plants from freezing. No, it is not a coat from Brunnello Cuchinelli, but rather the conversion of their carbohydrates into sugars, which lowers the freezing point of the liquids they contain. In essence, when we savor these sweet late-season harvests, we are really appreciating the natural antifreeze that these crops take on as they prepare for colder temperatures.

Of course, in colder areas of the country, this protection only goes so far before subfreezing temperatures damage the plants, but it often allows them to linger a little longer and to keep our gardens productive a little later into the season. One particularly mild winter in Connecticut, some carrots and leeks in my garden, covered in straw mulch as the cool weather came on, were harvested on Martin Luther King Day and contributed to a pretty tasty soup that could have sustained me through the march to Selma.

How these plants begin converting their starches into sugars is a complex and mysterious process. According to scientists, it does not happen overnight. The process is a gradual one, triggered by lowering temperatures that serve as a catalyst to this conversion. This makes sense, because otherwise a leek would sweeten simply through the process of being stored in the refrigerator. But this building of its sugars needs to happen naturally and gradually over weeks in the fall, as the leeks lie in their garden beds, awaiting a straw cover, as temperatures hover near freezing. Smart gardeners know to wait until these conditions occur before moving this produce to a root cellar or refrigerator. And smart cooks understand this through its inverse: the best way to sweeten an onion or to bring out the natural sugars in a cabbage is to cook it slowly, at the lowest simmer until its sugars peak.

I hope someone discovers that this slow simmer is the best way to bring out the sweetness in me and will keep me warm over the winter until all of my bitterness has disappeared and I am just a sugary mess. In return, I will serve him soup like nothing he has ever tasted before.

One thought on “The Self-Taught Gardener: Life is sweet (especially once temperatures cool down)”