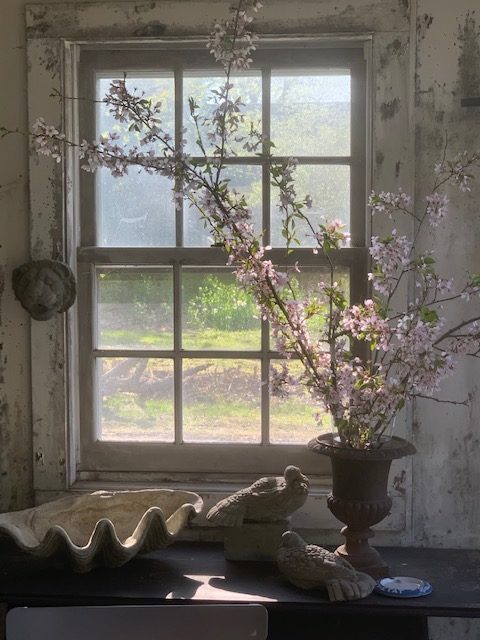 As I spend so much time at home this season, there has never been a year when bringing flowers indoors has been more important to me, nor a time when passing off to friends a few branches of flowering quince has had so much meaning. I have always loved cutting branches and using them in arrangements, from quince and lilacs to hydrangeas and viburnum, and a delivery of some quince branches to some homebound friends seemed to brighten their week, as well as their Instagram, making me realize that we all love seeing flowering branches. They bring nature indoors and, unlike a bowl of daffodils, they bring the very structure of a plant along with them.

Because I have been living elsewhere in the past few years, the amount of pruning that my garden needed this season drove me into a virtual frenzy. In the process, I have been thinking a lot about how to manage structural pruning, not only for aesthetics reasons but also to satisfy my passion for bringing branches into my house. If I leave on a few select branches, I will be able to take them off in the year to come, giving me flowers for the house while also leaving a shrub or tree that does not look like it was lopped off in some frenzy for bringing flowers indoors.

I think it may be worthwhile to reconsider the age-old adage to prune after bloom. Last summer, when pruning an old magnolia, I was proud of myself for leaving behind a few branches that hung too low over the path. Even though I had to duck around them all season long, I was rewarded by the pleasure of bringing them into the house and enjoying how they filled the house with their flowers and fragrance as they opened up. I would have been tempted to cut branches regardless, but for once my prescience paid off. I have had wonderful blossoms indoors without having to look out at a tree that appears to have just gone through a midlife surgery.

The branches of many flowering shrubs, such as quince, plum, flowering apples and cherries, magnolias, and forsythia, can be cut as their buds swell and forced into bloom. Sometimes they will flower indoors weeks before they will flower outside, moving the season along a bit, while the cut branches, set in large glass vases throughout the house, seem to bring the outside in. Some quince branches, thrown into a vase in the living room, and some stems of cherries in our bedroom, gave Brian and me the illusion that we are living amongst the trees. The morning light passing through the cherry blossoms is the closest I will ever get to waking up in nature, as I prefer a Tempurpedic mattress to a sleeping bag.

The idea of saving a little pruning for when branches are in bloom has made me rethink how and when I cut back some of my favorite plants. Several years ago, I stuck a broken branch from an oakleaf hydrangea into an old Arts and Crafts vase and realized what a great cut flower it made. Relatives of the oakleaf hydrangea are often used for cutting, but this species, with its pustulated foliage and looser flowers, was far more attractive to me than its big-leafed cousins. I now reserve my pruning of the oakleaf hydrangea until it is in bloom, judiciously taking out the branches that seem out of place on the plant and bringing them inside where they belong. And I have even planted a few additional oakleaf hydrangeas with such arrangements in mind.

There is plenty of garden work ahead, as the overgrown common lilacs at the edge of the property can clearly attest. As I clear bittersweet and wisteria from these lilacs this week, I will purposely leave on a few lilac branches to take down in the weeks ahead, so that I can share their fragrance with Brian and a few fortunate friends. And as I shape the Korean lilacs that grow nearer the house, with their more diminutive foliage and flowers, I will make sure to leave a few awkward stems on them as well, to ensure that I have a some of their branches to bring inside and enjoy.