Sometimes the oddest of circumstances can remind us how a landscape can provide us solace. It’s no surprise that a walk through a garden can lower our blood pressure, but who would have thought that images of a cooling landscape could lower my systolic pressure as I sat in the veterinarian’s emergency room waiting to find out why my beloved pet Fred had developed such pain overnight. And yet, as I waited there, the only thing that seemed to keep me calm was an image of Fred sitting the week before beside the newly restored Peavey Plaza outside of Orchestra Hall in Minneapolis.

This modernist masterpiece, built in 1975 by landscape architect M. Paul Friedberg, is a sunken plaza and amphitheater. It was saved recently from demolition through the efforts of Charles Birnbaum and the Cultural Landscape Foundation, local leaders, and the Preservation Alliance of Minnesota, which sued to save the historic site. Although the plaza has its share of plantings, it is primarily remembered for its use of concrete and water to create an escape from city life. The newly restored site, recently reopened, reminded me that water is one of the most important components in a garden. 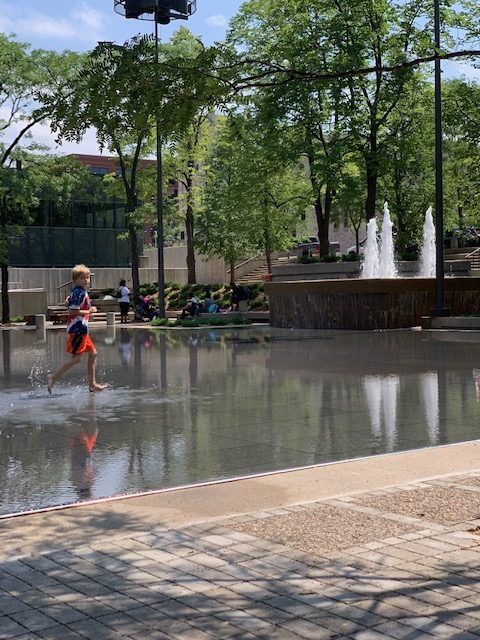 Water, like plants, has a way of soothing and calming us, sustaining us, and transporting us back to the children we once were. I remember days spent lying about on this plaza outside Orchestra Hall with friends, like me, just out of college and daydreaming of where we would find ourselves in the years ahead. And then I thought of other such “watering holes” that had crossed my path in the years since — a rill that bisected the courtyard at the Alhambra or another that ran through the gravel garden of Hollister House Garden, a reflecting pond at the Garden of the Golden Pavilion in Kyoto, the pool at the Beverly Hills Hotel, or just simply footage from a Tarantino film of the pool at the Playboy Mansion (which oddly seemed to symbolize humankind’s need for solace in changing times – a peace that was about to be broken in the fateful months leading up to the Manson murders.) Water comforts us. It helps us to find peace and to feel like the answers to our questions are near. Rain, often an answer to our prayers for our desiccated landscapes, calms our nerves as well, provided it does not come down at a rate of six inches per hour or go on for forty days and nights.

As I sat awaiting the vet’s opinion, I found myself floating back again and again to Peavey Plaza, with its rectilinear fountains sending water cascading into pools below and also into its long rectangular shallow pool where children splashed the week before on a hot summer afternoon. This image, like something out of a favorite film, brought with it a rush of joy and the odd comfort that all will be right with the world.

While Peavey Plaza has some plantings of sculptural pines and an overstory of deciduous trees, it is the elements of stone and water that give the site its genius. The juxtaposition of stone and water works to heighten the quality of each element: one solid, permanent and impenetrable, and the other liquid, fleeting and amorphous with an ability to capture light and refract it in a million ways. The plants, set along the outskirts of the plaza, seem like a hybrid of these two elements, at once solid and grounded, but also evolving through time and creating light and shadow throughout the seasons. The concrete nature of the site is mitigated and transmogrified by the rushing and dancing water, just as Fred is at once grounded and real, yet ephemeral and nothing more than a spirit dancing through my life.

As the doctor completed the exam, I was told that Fred had a bulging disc and would need medications and rest for three weeks. This presented me with quite the challenge, given the active nature of a beagle. I was told he was not supposed to jump or move about, but that we could take walks provided he maintained a calm disposition. Somehow I knew just the right place for us to go in the coming three weeks – Peavey Plaza – where Fred would find everything he needed to heal and I might find some peace as well. And I began to think of what role water needed to play in my own garden as well.

6 thoughts on “The Self-Taught Gardener: Hydrotherapy”