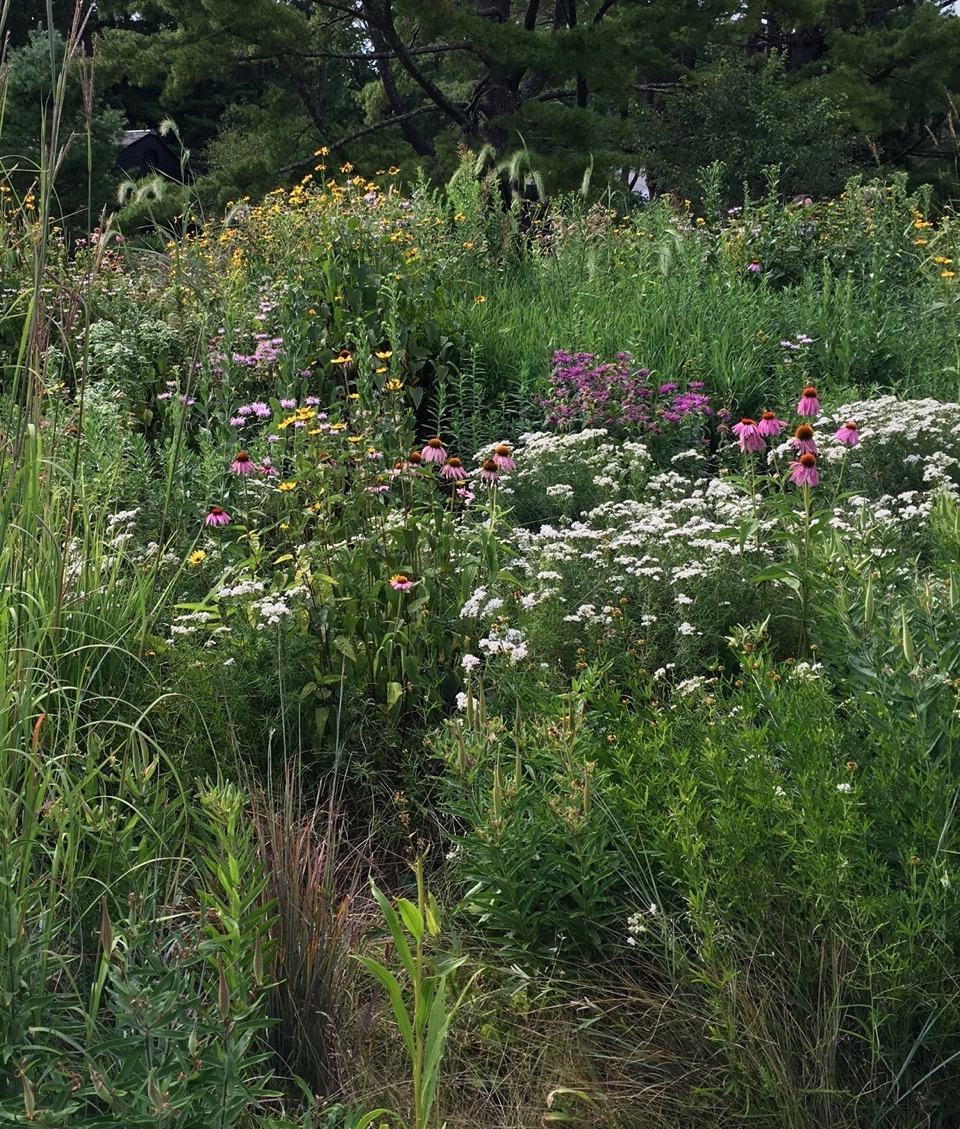 On Monday, as I went to meet a gardening friend at a farm in Connecticut for which she is doing some design work and consulting, I was taken by the beauty of the local landscape in which we lead our mundane lives. The curving roads, the mountains of the Berkshires slowly unfolding into the rolling hills of Litchfield County, pastures filled with cows grazing, and the abundant bodies of water that we usually take for granted but which seem so precious in a summer that has been so hot and dry, are all a daily reminder of why we live here. It is one of those moments when gratitude comes to me as easily as it does to my dog Fred when he finds himself in a sunny spot in which to soak up the day’s warmth.

I have come to find peace in this landscape and am not surprised in the least that the natural beauty of meadows and fields have come to inspire one of the ways we garden today. I am speaking of the meadow movement put forth by Larry Weaner and other environmentally minded designers. Traditionally, gardens have been managed landscapes that often veer greatly from the natural (think of the carefully clipped hedges of Versailles). While we seek something in them that reminds us of the grandeur of nature (and of the King, of course), gardens for me have always served as a reminder of man’s small role in the hierarchy of the universe – unless of course, one is the king. For this reason, I have been puzzled by what seems to me to be the arrogance of this meadow movement, because I have not understood how we think we can manage to create something so vast and far-reaching as an ecosystem of our own.

I cannot help but think, perhaps because I am Midwestern, that there is something egotistical in these attempts. Our standard method of gardening — selecting some favorite plants and adding them to a border — is really decorating more than it is taking on the role of a god creating his Eden. And, true to my roots, there is a side of me that finds larger attempts, such as the creation of a meadow, to be self-aggrandizing in a manner that is incomprehensible. Stewarding the land is one thing, and trying to bring it back to what it once was seems admirable, but somehow the idea of thinking that I could manage to prevent invasives and weed trees from popping up and marring my personal Eden, and then painting a perfect meadow in its place, has seemed wrong to this man from the Midwest. And oddly, there is something inherently conservative to my mind in reaching back for the good old days and landscapes that once were. Remove the invasives and unwanted foreigners and Make Meadows Great Again?

That said, I must confess that I am just as moved as others by this garden trend, and am taken with fields of asters, Joe Pye weed, goldenrod, and local grasses that flower and set seed in the light of the late season. For this reason, I have read Garden Revolution by Larry Weaner and Tom Christopher and have begun to dream of being a god in charge of my own paradise. At my old home in Connecticut, I decided to leave a good portion of land to revert to meadow. Given that it had not been deeply disturbed over the years, simply digging out hundreds of multiflora roses and some honeysuckle and cutting the meadow brought back some of the area’s glory.

I did not add plants to the mix, nor did I kill everything to the ground by solarizing the soil or using Round-up in order to start with a clean slate for planting. I simply mowed the field, newly rid of the honeysuckle and roses (although a few remaining thorns managed to flatten a tractor tire or two along the way). What arrived in the seasons to come was of interest, as black-eyed Susans and milkweed made their presence known amongst native and non-native grasses alike. As the field evolved, I would occasionally take to pulling out aggressive non-natives. I was relatively happy with the patterns of color that came throughout the season, and by the birds and butterflies that seemed to love the habitat I had helped to create. For me, this was a lower-case paradise, pretty and manageable, and light on the land and my wallet.

But as I turned up an agrarian road in the northwest corner of Connecticut to meet my friend and headed up a hill covered with a meadow designed by Larry Weaner, I was not prepared for what I was about to enter. Along the driveway, acres of composite flowers of every variety and grasses with their ripening seed heads were lit by the late afternoon sun. I suddenly had the urge to solarize my own patch of Eden, or even surreptitiously purchase some Round-up for judicious use against invasives, and then order thousands of landscape plugs of little blue-stem, pink Indian paintbrush and even daisy fleabane (which is lovely despite its name). I continued to think this as we walked about this land of the gods and took in the cacophony of the landscape, riotous with reintroduced native species that screamed yellow and pink to make their presence known in a manner that certainly was lacking in taste, and which surely left behind all of the rules of using the color wheel that I had been taught in my garden design classes at the Chelsea Physic Garden by a very English authority who knew color selection was critical to good gardening.

I looked down at Fred, running alongside us, and realized that he too was enjoying this trip to Eden, running after creatures left and right and basking in the warmth of the day. He was not thinking the colors garish, nor was I, but a part of me still struggled with this radical approach to landscape creation and undertaking the work of the gods. I wondered if there was some middle ground between this garden revolution and simply mowing my old meadow. And, as I headed out of the gate, like Adam heading out to make his way in the new world, I looked back at another man’s personal Eden, and was ready to head home to my own humble existence amongst mortals to toil away and appreciate my station in life.

2 thoughts on “The Self-Taught Gardener: Fields of Heaven”