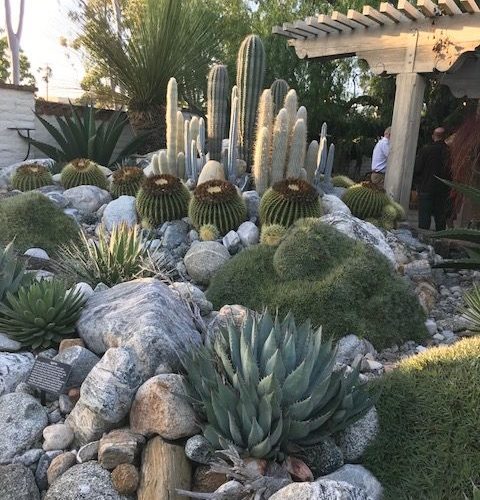 On a recent trip to LA, I was at a conference at Disneyland, and the planting program at Disneyland was not to be believed. Displays here need to look good every day of the year and maintaining such a standard involves gardening and planting at night when the Park is closed, and moving in – and out – hundreds of thousands of plants every year in an operation that seems more connected to Amazon’s shipping and inventory system than it does to the greenhouses of a public garden. The results wow visitors and the head Gardenateer (my term) is a talented man named Adam Schwerner who also worked in Chicago for many years raising the ante on display in public parks and along Michigan Avenue. Adam was almost the inventor of such horticultural pyrotechnics and I have admired his work across the country as he headed west like a true pioneer (towing thousands of plants with him, no doubt).

The scheme was an impressive operation, and one that was beyond my organizational (and brain) capacity. I could not imagine moving that many plants in and out of a display, let alone in the middle of the night. (And I used to work for Martha Stewart and once planted 2,000 daffodils in a early-season snowstorm in Connecticut in the middle of the night. Oddly enough, not for Martha, but at my own house).

So perhaps it was PTSD that made it hard for me to view the gardens at Disney, or perhaps it was the fact that I had to take two meetings sitting in a chair that resembled a giant teacup. However, during the same trip, I found a different site that served as my source of horticultural therapy It was a site that felt just as bejeweled and bedazzling as Disneyland; it was the Sherman Library and Garden in Corona Del Mar.

I was invited to a dinner there for the public garden leaders who were attending the Disneyland conference. From the moment we stepped into the garden, I was taken by its endless beauty and its artful planting. Succulents, from agaves to aeoniums, were arranged in such a staggeringly beautiful manner in beds and borders that I felt like they had just been put into place at their peak moment. In reality, though, they were not the products of the Disney-like overnight plantings, but rather they were plantings that had withstood the test of time.

I walked through this area of the garden, where foliage not flowers took center stage, and thought, “Who needs more?” Forms and shapes were artfully juxtaposed to show off the geometry of the mathematically arranged leaves of these plants, and the light that set them off made me feel like I was in a jewelry store.

I know I was supposed to be talking with the other guests, but could not help but run off with my friend Jill Nooney to peek into every nook and cranny of the garden. As the evening went on, I was, of course, obliged to sit at a table and make conversation, but really I just wanted to watch the light fall over this magical landscape.

I was convinced that, just like at Disney, someone would come out in the middle of the night to keep the magic moving forward. All evening, there was one introduction that I hoped to make: Mr. Disney, meet Mr. Sherman and the talented staff that work in this wonderful garden. Through careful and artful gardening, they seem to have taken your magic one step further, and with the nights off to enjoy it.

________________
A gardener grows through observation, experimentation, and learning from the failures, triumphs, and hard work of oneself and others. In this sense, all gardeners are self-taught, while at the same time intrinsically connected to a tradition and a community that finds satisfaction through working the soil and sharing their experiences with one another. This column explores those relationships and how we learn about the world around us from plants and our fellow gardeners.