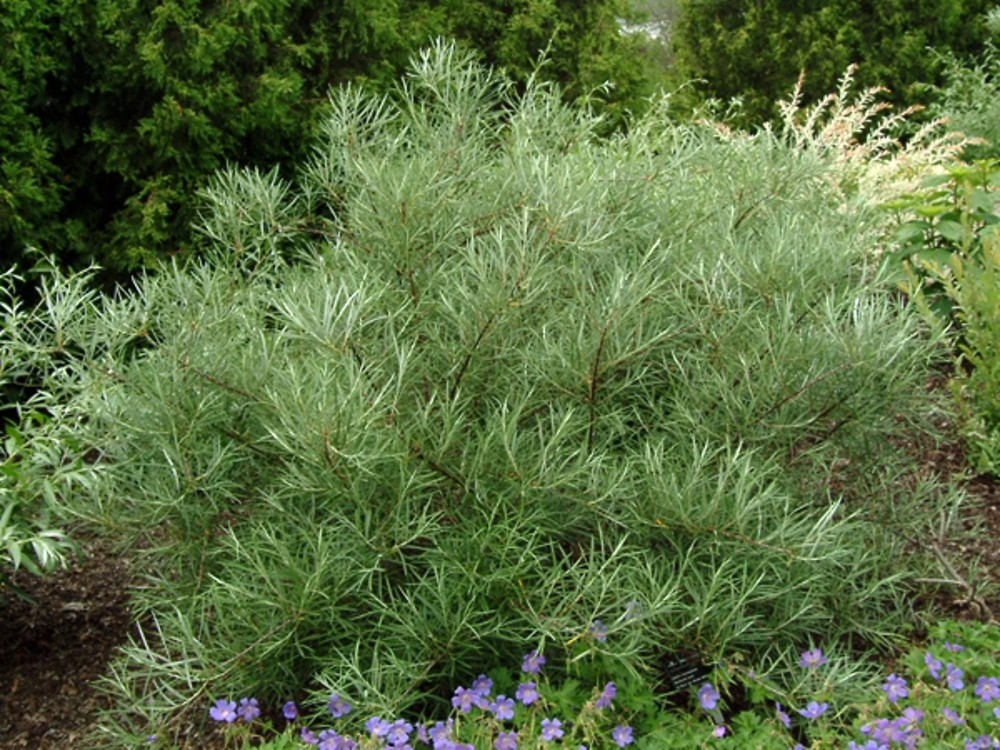 The rainy, windy days of the past few weeks have found me spending more time driving in my car than working in my garden. I am reminded of the old adage “if you want to know what grows well where you live, look in your neighbor’s garden.” And sure enough, I have found several plants that I am inspired to add into my own landscape, but I have also learned a few lessons of how I do not want to garden.

The plant that has me thinking about this the most is the variegated Japanese willow, Salix integra ‘Hakura Nishiki.’ This variety of a Japanese shrubby willow is prized for its pink, white and green variegated leaves that are held on its stems in whorls, a trait that is uncharacteristic of most other willows and creates a billowy effect when the plant leafs out, like a cloud of white and pink.

For many years, I grew a specimen of this plant in my garden in Connecticut. In spring, I would cut it back hard to just a foot and a half off the ground. This procedure, also known as stooling or coppicing, triggers the plant to send up long straight shoots of its leaves from new branches that form off of dormant buds on the lower section of the remaining trunk. The effect was glorious and, standing against a hornbeam hedge in a perennial border, it had drama and character that set off other plants within the area. But this month, the ubiquity of this plant in its rougher state, in stands in front of houses from Hudson to Otis, has left me finding it much less desirable.

The truth is that I have an issue with many variegated plants: to my eye, they do not look like they belong in more naturalistic landscapes. While their variegation makes them effective at providing a sense of light, their use needs to be carefully thought out and “restrained” (I can hear my mother’s voice as I type that word.) Too much and a good thing becomes attention seeking and strident, like a million female teen musicians whose names I do not know. And like those teen pop stars, this willow, which can easily be propagated from cuttings taken early in the season and set into potting soil that is kept moist, has become as ubiquitous as girls in crop tops and low-rise jeans at the local shopping mall. And (again I hear my mother’s voice), a little restraint in using this plant and some good grooming (at least a hard spring cutback) is in order. I cannot help but wonder how I would feel about the unvariegated straight species of this plant. Perhaps it deserves a second look and might be understated enough to find its way in more naturalistic plantings, as do so many other willows.

I also think that if one is looking for something to add drama, color or light, there are other willows that can be treated the same way but which would fit better into most garden settings and even into the areas at the outskirts of a property. Salix purpurea (and its dwarf form subspecies nana), also known as blue Arctic willow, is one such option. With silvery blue-green leaves and purple stems, this plant has drama and restraint. For example, my friend Elisabeth has created a hedge from the dwarf form that is stooled each season. And Campo de’ Fiore in Sheffield, Mass., has a straight full-size specimen in its front garden (I often stop by to see this garden, which is really like a nice small public garden, and then find myself going inside to shop.) And, since the stems of blue Arctic willow have been used in basket making for centuries, coppicing could even provide the material for a basket or two, making a garden chore doubly productive. I left a pile of these stems in an old urn all season last year, and it was my favorite container “planting” of the season.

The other form, which I have also grown and that can function well either cut back or in its full form, is the rosemary willow. With long silvery, needlelike foliage that comes on in the spring in a way that captures light with the same magic as slightly tarnished pieces of silver in a Dutch still life, this plant is stellar and completely underused in the garden and the broader landscape. If these two do not suffice, consider using white willow, Salix alba, which is really a tree. Cutting it back each season as a coppiced shrub increases its leaf size and places the shiny silver leaves right at eye level.

Oh, and leave the pink and silver-frosted ‘Hakura-NIshiki’ where it belongs, in front of shopping malls or on the occasional stage set of a garden where its showiness is put to good effect. Show some restraint.

One thought on “The Self-Taught Gardener: Cut-backs and by-roads”