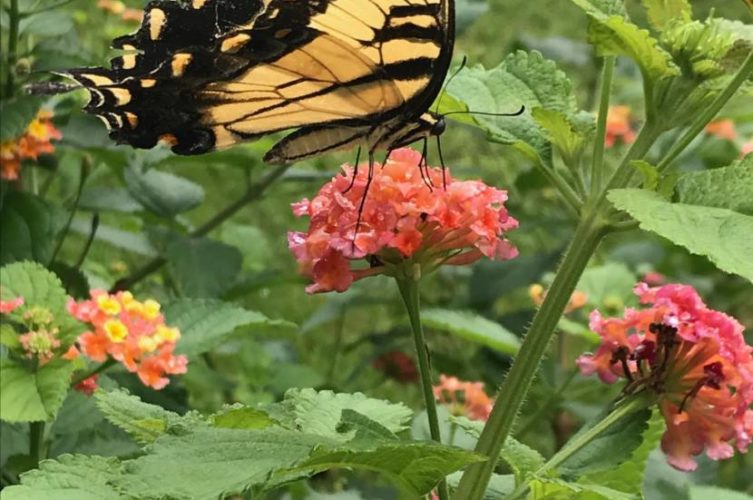 The gardens at Monticello have a relaxed quality late in the season and are filled with flowers such as lantana that keep a community of pollinators happy.

Over the past few months, as I ponder the talking points for a lecture at Berkshire Botanical Garden’s Rooted in Place ecological gardening symposium in November, I keep thinking about how our concept of beauty is evolving in a changing landscape. And I am finding inspiration and drop-dead beauty in places as diverse as Thomas Jefferson’s garden at Monticello and the parking lot of the Minneapolis outlet for the furniture company Room & Board (I need a sofa for my place in Minneapolis and I love a good deal.) And given that Mr. Jefferson saw some of this beauty so many years ago, perhaps our view is not evolving but simply reverting. (Mr. Jefferson’s appreciation of the range, diversity and beauty of our own species is becoming more recognized too, as the story of Sally Hemmings finds its way into the Monticello narrative.)

As I traverse the country for work and pleasure, my reconnection to the natural landscape and the agrarian fields of our countryside inspires my gardening with a spirituality that borders on the religious. But it is a religion that even an agnostic like me can embrace, for it lacks the dogmatic tendencies of many religions that I have known, and finds beauty in the imperfection and variety of the world around us. It celebrates the connection of individual elements into a collective beauty of which the individual plant, or even the human species, plays only a small, almost ego-less, role.

Perhaps it is due to a week with so much political upheaval that I am looking so hard for something that works together as a whole (unlike our Senate and an increasingly polarized Supreme Court.) And in this collective act, plants do not demonstrate ego or over-the-top, carnival-barking showmanship, but demurely take their places in unplanned, naturalistic communities or in loosely organized garden beds, where each is given the opportunity to shine. And by shining, I do not mean grandstanding and casting shade on their counterparts in the landscape (literally or figuratively), but rather being the best they can be amongst their peers, with their best traits coming to the surface.

Whether I am admiring the delightfully simple flower borders of Monticello that seem to replicate the garden as it would have looked late in the season in Mr. Jefferson’s own time, or feeling astonished by the meadow-like plantings of butterfly weed, mountain mint, echinacea, asters and prairie clover that border the parking lot of the Room & Board headquarters, I am seeing plants being allowed to do what they do best (and perhaps what we can do best if we give ourselves the chance), and that is just simply being themselves.

And these plant populations are attractive to me for another reason. Unlike the vegetatively propagated varieties of perennials and shrubs that inhabit many botanical and public gardens, these plantings display the diversity within their own species, because many of the specimens in these plantings have been grown from seed and have been left to remix their genes when flowers are pollinated. Then, as seeds are formed, drop to the ground, and take root as small plants, these plants show a fuller range of what their species contains within it. Some blanket flowers bloomed earlier than others, setting seedheads of one against the flowers of the next plant (and this staggering of flowering also provides food for pollinators over a longer period.) Others varied in height or form, like a large family that shares common traits, but each of whom shines in their own manner, with even the wallflower sitting off to the side having a moment of glory in family photos.

This connection to species and what they can offer was also evident in the simple beauty of so many of the plants along the lawn at Monticello. As I traversed the garden walk behind Jefferson’s iconic home with Peggy Cornett, the plant curator who helped get the Historic Plant Center off of the ground at Monticello and inspired me to love old-fashioned flowers, I was taken by the simple beauty of these plants; their single-petaled flowers still expressed the freshness of the uncultivated even though they had been brought under cultivation. They allowed me to see at once the beauty of nature and the artfulness of the human gardener who had brought it all forward. It was a moment that reminded me of what I loved about gardening and nature: the hope that the two, unlike many of the other inhabitants of nearby Washington D.C., could find a way to inhabit the same world as one.

Oh, Senator McConnell, if only you were more representative of the breadth and diversity of your species, or at least appreciative of it.