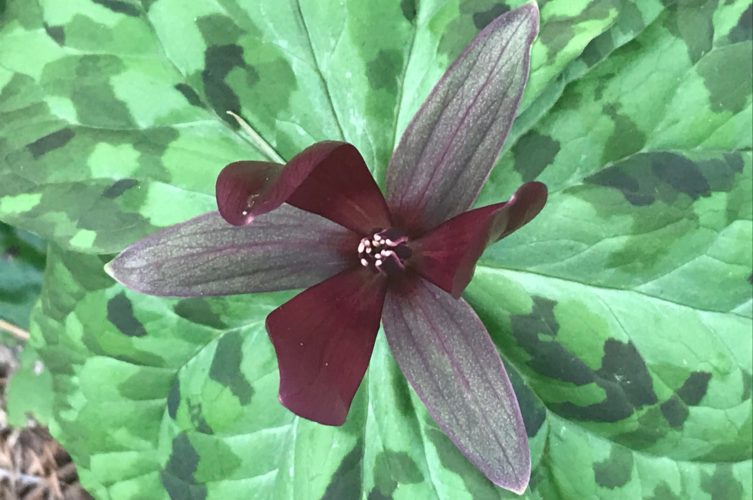 I am not one to travel to beachy locales, to escape from the winter by basking in the warmth of the tropical sun. Instead, I have my own approach to seasonal escape. A recent trip to Portland, Oregon, took me out of the crazy weather that those of us in the rest of the country are experiencing and provided me with the comfort of other seasons – a moment of spiritual reawakening that comes with the lengthening days of spring. And I felt it was worth sharing the observations that I had there, not of tanned bodies on towels strewn across the beach, but of plants basking in the soft seasonal sun and responding to its warmth and curative properties. For me, the plants that come forward at this time of year reflect my own need to bring myself back into flowering mode after the long winter.

While I, of course, had a list of places I wanted to see in Portland, ranging from the Hoyt Arboretum to the Portland Japanese Garden, my friend Richard Hartlage suggested I head to the Leach Botanical Garden, a project in the early stages of development within the city of Portland, to see those first vestiges of spring that would sustain me back home until spring snows disappeared. And while I managed to visit the other two gardens as well, this excursion to Leach reminded me most why we find ourselves early in the season on our knees in the garden. Other than the flowering trees that break into bloom at this time of year, it is the flowers that bring us to our knees in the spring and that inspire us to worship the magic of the natural world.

Perhaps no other spring ephemeral has a more religious quality than the trilliums, which have a holy trinity all their own. Their tri-petaled flowers surrounded by three leaf-like bracts (some of which have beautiful mottling) call to mind the religiosity of the early twentieth century British literati who were captivated by the magic of the holy trinity. (The question of how God could be comprised of three parts left Etonians struggling for an answer to what they perceived as the mystery of spirituality.) I never understood the odd obsession with the mysticism of this (perhaps because I came from a country that held e pluribus unum at its center – out of many, one), but in looking at the flowers of this genus, I understood that there was something unique about the balance and interdependence of something with three parts, rather than two or four. Something about this indivisible prime number draws the eye to the center, and at the center of these three leaflets was something even more spectacular – three-petaled flowers that caused me to look even more deeply into the center of these sweet woodland plants, perhaps to be looking into the mysteries of life itself. I may not have ever understood the holy trinity, but now I understand how the number three has a magic that comes from its unique position as the first multiple not be able to be simply cut in half. Like pi, three seems endlessly divisible, only to reveal its complexity and connection to the infinite.

Trillium also cast a light on something we often lose sight of when looking at plants at any time of the year. We are usually so caught up in flower shape and form that we forget to look to the center of the flowers and to observe the pistils and stamens that represent something that perhaps those devout Brits were looking for at the turn of the last century – the mysteries of life itself. For, in the camellia flowers that were coming into bloom at the Leach, or hanging delicately below the petals of dogstooth violets throughout the park, or on the Rubus species that held their flowers in clusters, were those flower parts that guarantee that life would move forward. These male and female parts were part of a mystery older than mankind: the creation of seeds and the next generation of plants that would inhabit the woodland. As I walked about, taking in visions of woodland anemones and ladysmocks demurely putting themselves forward, I saw flowers for what they were, chaste and profligate at the same time. As I admired hellebores whose carpels, pollinated early in the season, were swelling as their ovaries began seed production, I came to a new idea of the mystery of the immaculate conception, for there was innocence as well as knowingness in this act of insemination. And, at this moment, the Brits and the mystery of the trinity might have found in me the convert they were always seeking, on his knees taking in the mysteries of life reflected in the flower of a trillium.