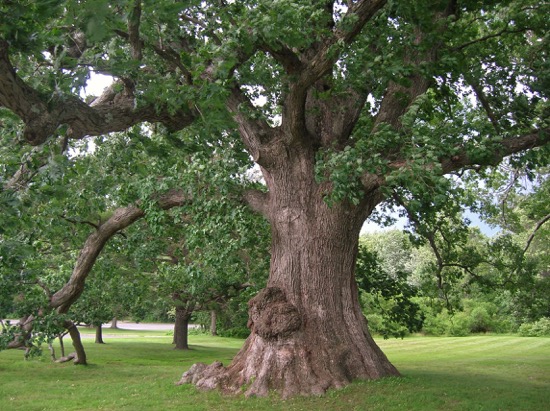 A noted entomologist comes to the Berkshires and shares his knowledge of creating habitat, but what does it mean for the art of gardening?

Last week, I had the pleasure of taking someone to the airport. While this may not be a task I usually look forward to, because this particular trip allowed me to spend an hour one-on-one with Doug Tallamy who was here to address the regional meeting of the Garden Club of America, it turned out to be the highlight of my week. Tallamy, an entomologist, wildlife ecologist and author of Bringing Nature Home, has been a champion of creating backyard habitat for some of our favorite species of birds and insects, as well as for creatures we barely think about but which are critical to our well being and to the pollination of our plants, including our food crops.

I have been a fan since I first heard him speak many years ago. I also like his book, The Living Landscape, which he wrote with Rick Darke. What particularly interests me about this book is how it explores the creation of backyard habitat and redefines gardening. However, unbeknownst to Tallamy, his designated driver had a few questions about the relationship between the landscape, the environment, and ornamental horticulture. So, the drive to the airport not only earned me credit for helping the Lenox Garden Club, but also gave me time to interrogate him about the nativist debate and my own gardening endeavors.

Tallamy has been one of the strongest advocates for planting native flora. As an academic and a researcher, he has spent much of his energy examining plants that support our native insect and wildlife populations. He has worked tirelessly to enumerate which plants are most critical to preserving our ecosystem and to determine exactly what support they give to birds, bees, butterflies and moths and their larvae. In his talks and writings, he opines on how native plants, and particular keystone species, are essential to the maintenance of these populations. It may not come as a surprise that plants native to a specific region are especially critical to these populations. The flora and fauna of any particular region have co-evolved over millennia to support one another, and the proof of this co-dependence is staggeringly clear when we look at the statistics. It may not come as a surprise that a white oak native to the Northeast supports more pollinators than a non-native Japanese katsura, but it is shocking to discover that many non-native species offer little to no support to caterpillar species. More surprisingly, certain species, particularly native oaks, pines, cherries, birches, and poplars, serve as foraging hubs for wildlife and these and other keystone species, which make up only 5 percent of plant populations, actually support 73 percent of the caterpillar species.

My newfound appreciation for the beauty of native plants, as well as this information about their value to other species, has changed how I garden and the plants that I select. Nevertheless, I can’t help but wonder how Tallamy’s disdain of grassy lawns as pollinator wastelands will go over with the members of the Garden Club of America, who are drawn to gardens not just as habitat, but as places of beauty and color. While native plants can be beautiful, it is our nature to covet things from abroad. After all, a woman might wear the American designs of Calvin Klein, but will she forgo Prada just because it comes from Italy? A quick look around the room answered that question.

I am fascinated by the native movement in horticulture, but lack the puritanical nature to commit whole-heartedly. I also imagine that many of the women at the lecture, no matter whom they will vote for this November, concurred with my position on gardening. Of course, they were all much more polite than I am (which is not a sexist statement but more of an understanding of myself and why I would not be invited to be a member of a garden club) and did not ask any uncomfortable questions in the Q & A at the end of Tallamy’s talk. However, just because these women and I maintain an interest in non-native plants does not mean we do not care about the ecosystem. In fact, the club held a milkweed growing competition as part of their event and wanted to hear Tallamy’s recommendations on plants such as redbuds and milkweeds and willows and asters that would help fill their gardens with non-herbaceous ornamentals that they coveted, namely butterflies and birds. And while caterpillars themselves may not seem like exciting additions to the garden, it is important to remember that they feed a good portion of our bird population and that the ones not eaten transform into moths and butterflies.

I, too, held back my questions, knowing full well that the inquisition could occur in the privacy of my car (for once I could at least appear polite in public), all the while formulating questions that would justify my inclusion of epimediums and Asian dogwoods in my garden, or at the very least, mitigate any guilt. So I bided my time as Tallamy explained how fauna needed a steady source of food throughout the season (really it would be ideal to have something in flower or fruit from February through November, which is what makes asters so useful in the late season.) He also talked about the value of leaving snags and old wood about, to serve as nesting habitat for many of these species. Animals need food and homes, just like we do…and a perfectly groomed garden might lack essential nesting places for birds and bees, as well as for caterpillars.

After his talk, Doug and I got on the road and started talking about politics (after all, aren’t these plants really unwanted immigrants?) and I found that we concur on many things. As I asked him about whether foreign genera of dogwoods or pines can have a place in our garden, and if they support insects, I found that I was not sitting next to an ideological purist from the opposition party, but a pragmatist and a reconciler. We discussed the timeline for species to co-evolve (which appears to be significant and, in many cases, thousands of years before these plants and pollinators really provide what one another needs.) We also discussed those foreign species from the same genera as some of our natives that actually do support local fauna (it turns out that many willows and chestnuts serve a purpose outside of their native territory.) I took this last note as a vindication of my recent planting of a Japanese bugbane that speciated from our native bugbane back when the continents divided.

And, as we drove through the airport’s entrance, I looked across at a man in the seat on the other side of the gear shift who is not, after all, out to limit my planting palette in an unreasonable way (I think we both share the same view on the need to eradicate invasives in a responsible manner.) And, as I shook his hand at the airport entrance and bid him farewell, I saw a path forward for all gardeners, indivisible, in many nations and one world, to get along as we care for the ecosystem around us. And, if I have the option, I want to cast my vote in November for someone as nuanced and balanced as Doug Tallamy.