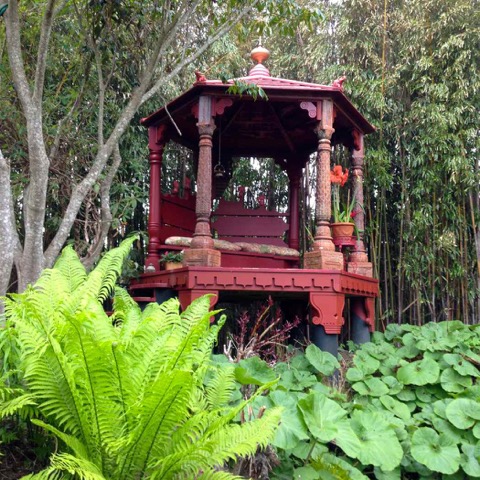 Stockbridge — In a time when books about decluttering our homes are topping the best-seller lists, it seems odd to talk about collecting, but a talk by two gardeners and a nurseryman this coming weekend at the Berkshire Botanical Garden has me thinking about how, as gardeners, we still obsessively collect plants. But the zeitgeist has made me wonder, what do we do with them, and do we need them?

For me, the subject of collecting calls to mind my first job out of college at Interview Magazine, where the basement of Warhol’s old factory was crammed full of boxes of vintage cookie jars, Fiestaware and whatever else Andy took a fancy to as he scoured flea markets. It also reminds me of my first visit to the prop room at Martha Stewart Living, with its organized and labeled shelves of painted tole trays, carefully stored transferware, finely polished silver, and jadeite – the green glass bowls that Martha seemed unable to resist. Each place represented an approach to collecting, both obsessive in their way, but one chaotic and exuberant and the other methodical, thorough and orderly. Both methods also call to mind the ways that many gardeners display the plants they collect.

Many of the plant hunters and collectors I have known fall into these categories (and their gardens can alternately feel sterile or chaotic), but there is another group of exceptional gardeners who have a different approach to the plants they passionately and obsessively track down to add to their collections. This last group includes my dear friend Peter Wooster, and John Gwynne and Mikel Focarelli of Sakonnet Garden who are speaking at BBG with nurseryman extraordinaire Ed Bowen this weekend, who treat plants with a reverence that takes the best of the two approaches and builds on them, not by categorization and organization, nor by simply throwing plants together, but by looking at these plants and seeing how they can perform in the garden and play well with others.

I first had the pleasure of seeing John and Mikel’s garden when I was working on a PBS series down the road in Little Compton, Rhode Island, and while the magic of their carefully cloaked garden was evident from the moment I entered the gate, it took repeated visits to understand the craft behind their sorcery. I first went there with a friend who wanted to show me an outdoor room they had created from clipped azaleas. And though some of these azaleas were common varieties, it was not the provenance of the plants that was significant; it was John and Mikel’s approach to using them. With years of clipping and training, John and Mikel had managed to create a wall of flowers that allowed one to leave behind the idea of potted Mother’s Day azaleas to see what these plants could really do and to see them in a new light.

The flowers, when displayed in this manner, took on a beauty this genus had never before shared with me. It is this approach to collecting, whether the plant is rare or mundane, that transforms gardens and the plants within them into works of art. If the garden is the stage and the plants the actors, it is essential for the performers not to simply inhabit the stage, but to be pushed to give their strongest performance, to make us see the world and the plants before us differently. Setting a plant in place in a border is different from giving it the role of a lifetime.

Behind the walls of Sakonnet Garden (which are ingeniously and affordably comprised of several layers of wooden snow fencing), almost every plant comes alive in this manner and takes on a role that is worthy of an Academy Award, whether as the lead or in a supporting role. Copper beeches trained to create elegant arches form the nave of a church. Rodgersias and other notable foliage plants inhabit enchanted woodlands, but also take on an Orientalist flair when set

against an Asian folly. And while this idea could call to mind the offensively hammy performance of Mickey Rooney as the Japanese building manager Mr. Yunioshi in “Breakfast at Tiffany’s,” plants have a greater ability to play exotic roles that have less to do with their own place of birth than Irish-American actors.

In another area of the garden, cryptomeria are set into an allée that towers above us and makes us feel like Alice in Wonderland after she imbibes from the bottle labeled “DRINK ME.” The scale of spaces changes from room to room within this garden, and allows us to see the majesty of specimens large and small. The cryptomeria may dwarf us, but further along the path, epimediums may cause us to look more closely as we bend down to see the wands of starry flowers, held high over their sturdy flat leaves, that call to mind a miniature exhibition of floral fireworks in yellow, purple, and pink. A silvery thistle pops up in another border and shares with us its ghostly presence and at first sight makes us catch our breath.

It is this approach to plants, not merely owning them or not merely keeping an inventory, that is at the heart of good plantsmanship. Unlike the orderly gardens of the original botanical gardens that separated plants by family, a garden of this nature is based on the contention that all plants are one, and yet each plant is unique. This vision is one that requires both a maturity of the mind and a child’s sense of wonder, and as I listen to John and Mikel this weekend, I will try not to decipher who sees what (though I am secretly envious that both of them may have mastered these two ways of seeing), but I will listen carefully and see if I can come away with an understanding of how they listen to their plants.

Note: Sakonnet Garden is open to the public on certain days for viewing. For information, click here.