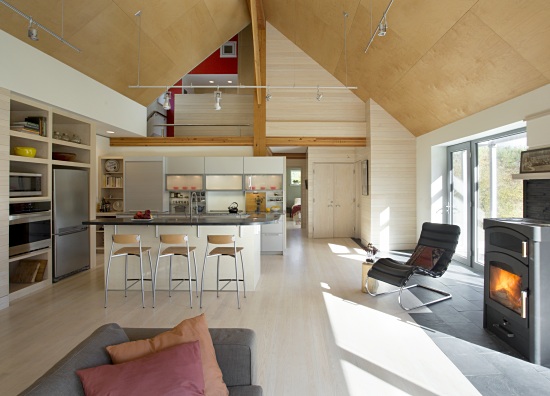 This 2,000 square feet home is heated comfortably with one wood burning stove and one small, portable electric heater. There is no furnace.

Following the interest raised by our earlier article in The Berkshire Edge about the Gordon-Deming homes for Central Berkshire Habitat for Humanity, we continue the conversation on energy efficient construction by looking at built examples, the first of which is a home built in Vermont for a family of four.

The Passive House Standard (PH) is considered the “gold standard” in energy efficient home construction. Initially developed in the U.S. in the 1970s, but left behind with the energy crisis, PH has since evolved in Europe, particularly Germany. Interest in PH has been revived in the U.S., and the virtue of its focus on highly insulated, airtight buildings, with minimal heating requirements, is becoming steadily more recognized. The Obama administration recently announced federal support to “accelerate the trend toward construction of Passive House certified…buildings”.

There are thousands of Passive House certified buildings worldwide, and many dozens in the US. We spoke with the owners of one of these, the Landau family, who built a second home in Vermont, to which the parents plan eventually to retire.

There was never any doubt in their minds that they wanted to reach for the highest performance criteria they could achieve, motivated not only by the specter of climate change but also by a desire to reduce dependency on fossil fuels and to minimize the systems we have in our homes that are expensive to install and maintain. They heat the entire 2,000 square-foot home with one wood burning stove and one small, portable electric heater, and have no furnace to feed and maintain.

One of the major benefits of the house is comfort. Barbara Landau told us that on a recent winter day, when the outdoor temperature was -17 degrees, and the house had not been occupied or heated for several weeks, the interior temperature of the home was measured at 48 degrees. When they arrive at their house on a Friday evening, they light the fire, plug in the heater, and the house is comfortable enough by the following morning to turn off the heat. One of the most striking features is the lack of noise. The interior is so quiet that when a door or window is open they are taken aback by the sound of frogs in a nearby vernal pool.

The house looks no different from a “normal” house, and most of the construction details are exactly the same. There are, however, a few important construction standards that are not so much difficult as different. For example, exterior walls are thicker than usual due to increased amounts of insulation. This means the typical details around windows that contractors are used to don’t work and have to be reconsidered. Slabs on grade will have thick layers of insulation below them, which in itself is not challenging but is also not typical. The owners said many contractors pushed back and tried to dissuade them, but they simply kept looking until they found the right one.

The Landaus are very happy with their home. They were keen to emphasize that building this way is not as hard as people think, and that just because it’s different, doesn’t mean it’s difficult.

Building to these standards makes sense on both micro- and macro- levels; staying comfortable in our homes will become increasingly more financially challenging, and since the operation of buildings is responsible for nearly half of all the energy consumed (and 75 percent of electricity alone), and the CO2 emitted in the U.S., a fundamental shift in building energy use can have a significant global impact.

The move towards Net Zero Energy buildings, where buildings use so little energy that their needs are met entirely by on-site renewable energy sources (such as solar panels), is slowly building momentum, and it is becoming increasingly clear that making our buildings air tight and super insulated is the way to get there. It’s best to minimize energy use as much as possible before thinking about making your own.

The standards are simple and easy to achieve. You need the will, the knowledge, and maybe a little extra cash up front. The jury is still largely out on exactly how much more this kind of building performance costs, relative to a less well-performing, but code compliant building. Some say as much as 10 to 15 percent, others a lot less, but all agree that any cost premium is steadily reducing, and that the payback in reduced energy and maintenance bills, and increased comfort, is considerable.

Special thanks to Elisabeth Holmes, interning with The Edge from the John Dewey Academy, for her help in preparing this article for publication.