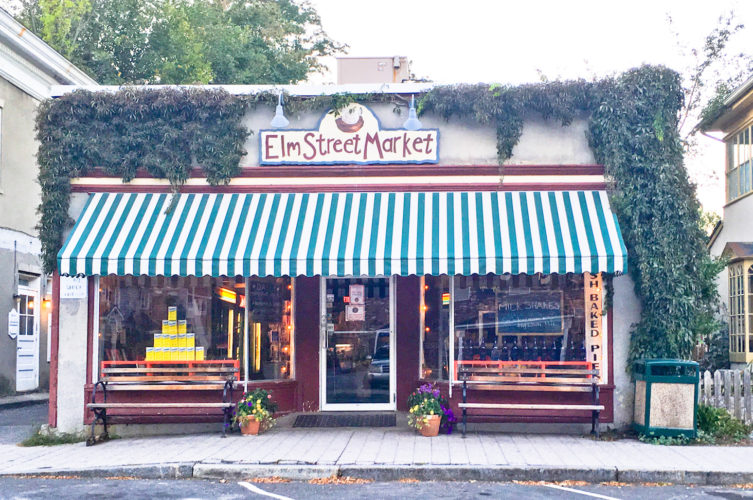 In the eyes of many, Stockbridge represents the archetypal American small town. It was Norman Rockwell’s hometown, and his illustrations of daily life in America often used local residents as models. The famous Red Lion Inn is one of few remaining gracious hotels in New England, with a large rocking chair porch right on the Main Street. In a town where nothing much ever changes – on purpose perhaps – the Elm Street Market has changed hands – but, the plan, anyway, is still for nothing much about the Market to change!

When our grandparents were young, a main street grocery store, with a broad range of goods, could be found in most small towns in many parts of the country. Typically, the store included a place to eat, get a soda or ice cream, or just socialize with your neighbors. Since then, changes in how we live have sent many of these markets packing. Instead, most people buy their groceries in large- to big-box-sized corporate stores spread along major streets and highways. The small main street retailer has found it hard to compete.

But, at least here in the Berkshires, you can begin to see that trend slowing, and maybe even reversing a bit. Over the last 15 to 20 years, as the ‘farm to table’ movement has become more mainstream, people have begun to pay attention to how their choices about where to shop affect the communities in which they live. Keeping local businesses alive means that downtowns remain vital, which supports the local economy with both jobs and tax revenue. The Berkshires even created its own currency, Berkshares, as people realized that the money they use also has an impact.

In this context, small markets like the Elm Street Market in Stockbridge have survived by adapting to serve a variety of customers under one roof. The Elm Street Market serves the locals who come in like clockwork every morning for their coffee and breakfast, as well as the tourists who flock in all summer to get a picnic basket to take to Tanglewood, or in the winter for some hot chocolate after skiing. In addition to food to buy, there is take-out, deli, wine and beer, grab-and-go, coffee and tea, and a counter and seating to allow customers to use the store not just as a place to buy things but also as a place to build community, socialize and de-stress.

In America it can be hard to find unique places that allow us to relax and share some downtime with friends and neighbors. Again, the chains have the upper hand, so Panera, or a fast food place or a Starbucks may be all that are available. Small towns like those in the Berkshires have the advantage of places like the Elm Street Market, where life can slow down a little. And that seems, to this writer at least, like a really valuable asset!