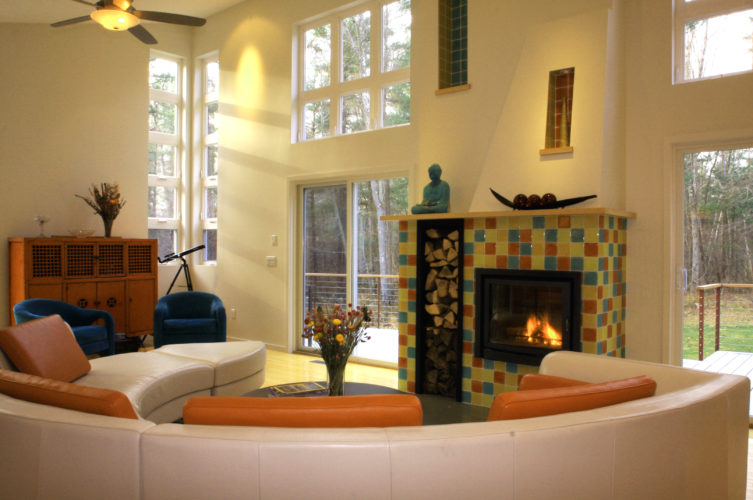 The word ‘renovation’ covers a lot of territory in the architectural world. Setting aside for now the somewhat arcane discussion about the exact meaning of synonyms like ‘rehab’, ‘restoration’, ‘alteration’, ‘repair’, ‘adaptive renovation’, or ‘adaptive reuse’ – all of which involve modifications to an existing building to a lesser or greater degree – we will simply note that ‘renovation’ can mean pretty much anything from changing the front door to constructing something that resembles the original building little, if at all. The Diamond Residence is an example of a ‘renovation’ that lives a lot closer to the latter definition than the former. While the original house is still recognizable, the ‘renovated’ house is both aesthetically and functionally a different structure.

For any building to stay relevant, it needs to change. In this sense, it can be seen as a living entity. The relentless forces of evolution are no less present in buildings than in living beings, and the extinction of countless species (even without our help) is paralleled by the legions of buildings razed over time because they no longer ‘worked’. But the factors determining the continued viability of a house are also personal, because a house is the most intimate of structures. In his book How Buildings Learn, author Steward Brand writes, “Every building leads three contradictory lives – as habitat, as property, and as component of the surrounding community…   Economists dating back to Aristotle make a distinction between ‘use value’ and ‘market value’…If you maximize use value, your home will steadily become more idiosyncratic and highly adapted over the years. Maximizing market value means becoming episodically more standard… in order to meet the imagined desires of a potential buyer.” In short, renovation – change over time — is the mechanism powering any structure’s evolution.

The Diamond house was originally built in 1989 as a ‘contractor spec house’. It was, as Steward Brand notes above, designed to, “maximiz(e) market value…”. It reflected the aesthetic of that time in many ways, but, interestingly, unlike many of the houses built then, it was constructed as a ‘split level’ house, arranging the living space along each ‘side’ of a switchback stair, much like the ‘split level ranches’ of the 1950s and 1960s. By 2006, the owners realized that their young family of four needed more room than the existing houses offered. More importantly, the roughly 3500 square feet of existing space was at best marginally useful, largely due to the split level design. A great deal of energy was required by all to move from one room to another in the course of an ordinary day. Given that both Jeff and his wife Diane run their respective businesses mainly from offices in the house — she as Executive Director of the Berkshire Film and Media Collaborative and as an independent media producer and he as head of a private commercial real estate investment corporation – the need for more space was becoming increasingly urgent.

Architects need to ask a lot of questions in order to figure out what the client really wants.   From the answers to these questions, the ‘program’ emerges — a document defining as clearly as possible the quantifiable spatial needs of the client. Equally important, however, is extracting how the renovation can precisely reflect how the client would like to live, now and in the foreseeable future. Of course, budget is always a concern, but fiscal discipline means nothing if the renovation doesn’t work on a day-today basis for the family. A well-written ‘program’ provides the vital information that the architect needs to physically manifest the client’s wishes.

Understanding the site is the other critically important aspect of any successful project and, in the case of a renovation, figuring out how the existing house will be integrated into the final plans. Given the split level design, a large, single level addition housing a new kitchen, dining and living areas was added off the living room side of the existing house. This room needed to be both spacious and intimate, a place for the family to entertain or simply to hang out together. Entry was re-located between the existing house and the addition. By raising the entry about a half level and adjusting the grade below, a four-car garage was included without overwhelming the design. It was also decided that a large deck that allowed outdoor access from all sides would surround the new addition. Finally, to integrate everything, a standing seam metal roof was placed over both the existing and new sections of the house, and the low-maintenance metal siding selected by the owners for the new construction matched the charcoal brown of the existing wood siding.   Construction was done by Iovan deRis Builders, and Shari Pellows Interiors designed the interiors.

The Diamond house is an excellent example of a successful compromise between ‘use’ and ‘market’ values. But, as Jeff Diamond notes, the most important part to the Diamonds was that the house was ‘purpose built’, never forgetting that the quality of the day-to-day life of each member of the family was what mattered most.