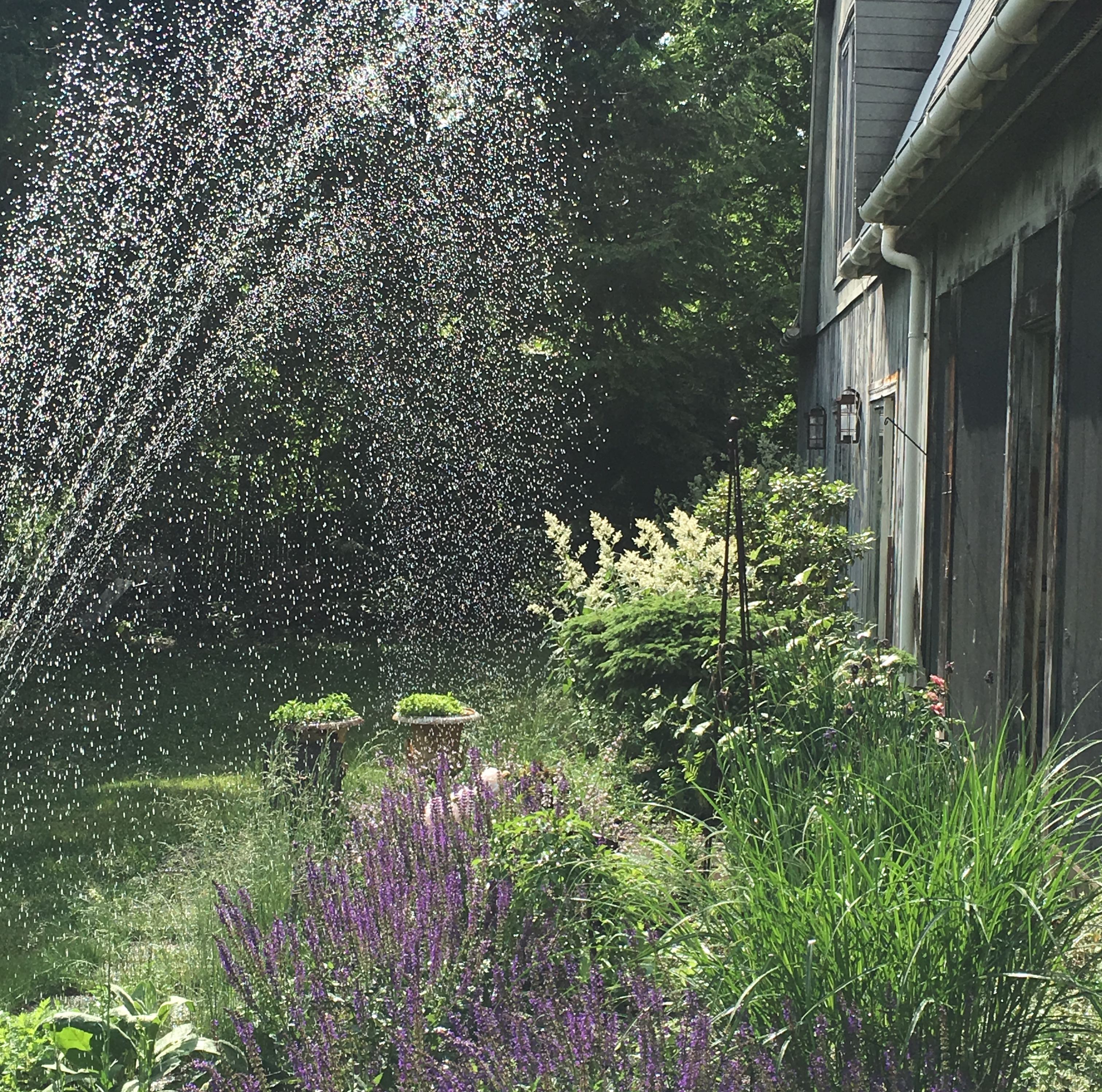 I often dread the idea of houseguests more than I dread being invited to a weekend luncheon. I love the company in the evening and the conversations that take place around the house as one gets more coffee in the morning, but just like the dreaded lunch invitation, guests are a nuisance. I am first and foremost a gardener, and while I enjoy the pleasure of others – as well as beignets or a cherry clafoutis as part of a decadent, lounging breakfast, another aspect of me is staring at the sun as it moves up in the sky and thinking of all the tasks that I am not accomplishing. And they are legion.

Watering is best done early in the morning to ward off disease by allowing foliage to dry and also so that less of the water evaporates before hitting the ground under the hot afternoon sun. And other tasks are best performed in morning sun both for the sake of plants that are being transplanted and for my own sake.   I wilt in the heat of noon, and am ravaged by insects come late afternoon as they seem to make their way forward, just as I look at my to-do list and see that I have not even crossed off half of what I wrote down ambitiously the night before. This last task – crossing off — is as satisfying as completing the job itself and sometimes, particularly on days when I have afternoon plans, I add simple things to my list that I can do in moments, for the sake of feeling productive and less guilty about heading out. I often imagine a time when I will have more free time and will think a matinee or afternoon concert is a delightful diversion (provided my garden is free of weeds), but until such a time in my life – I am a man divided. The me, who, like the rest of humanity, loves a nice lunch and a long conversation with friends or even an afternoon matinee of a summer thriller, is a part of myself that the inner gardener abhors – he seems ambitionless and lacking drive. This rancontuer is repressed as often as possible and, even when he comes forth and slips off for a pool party or a Sunday brunch (where he often has a lovely time), he is looked at with judgement upon arrival back home. As this wanton fellow pulls back into the driveway, where plants seems to be fainting from the heat and a lack of a good watering, he is reminded by the inner gardener that he needs to be responsible. How could he desert these poor sessile creatures that do not have the option of diving into a pool of water, but must patiently hope for his return and a refreshing drink being delivered to them, their needs not unlike the guests of the previous weekend.

The inner gardener despises this man, berating him when he heads out, but this raconteur argues that he too must be cared for, just like the plants in the garden. While his choice of hydration often involves wedges of citrus and tonics that help him to recover from being brow-beaten, he too needs to be in and of the world. And holiday weekends belong to him. After all, if the nation is taking a day off to celebrate our independence from England (the original Brexit if you will), certainly he deserves some time off. And so off he goes, with a houseguest in tow, to see the house and garden of Suzy Freylinghuysen and George Morris on Saturday morning. And the following day, he celebrates his own independence from the garden by going to a friend’s for fried chicken and fireworks (bearing an arrangement of oakleaf hydrangea made by his houseguest from a branch that an animal had broken off the night before that his other half noticed while doing a little gardening that morning).

And as he sat on his friend’s stone terrace, looking out at Litchfield County and an awesome backyard display of fireworks, his host commented on the disrepair of the stonework of his terrace. Winter frosts had caused it to heave and become uneven, but, the host asked, what was he to do? It was more work than it was worth to fix it so he simply walked carefully and advised his guests to do the same.

At the moment, both the raconteur and the inner-gardener perked up and shared that they had been imagining a terrace on the back of their house and were considering gravel for myriad reasons, but the fact that it would not buckle was of interest to both of them. At that moment the inner gardener excused the pleasant evening as research, while the ranconteur rakishly dreamed of the day when the terrace would be completed and would not need to be reworked after a hard frost.

Needless to say, the raconteur sent the inner gardener out early the next morning to begin to dig the foundation. He looks forward to checking this task off of the list himself.